Mind your manners during races for the safety of all. 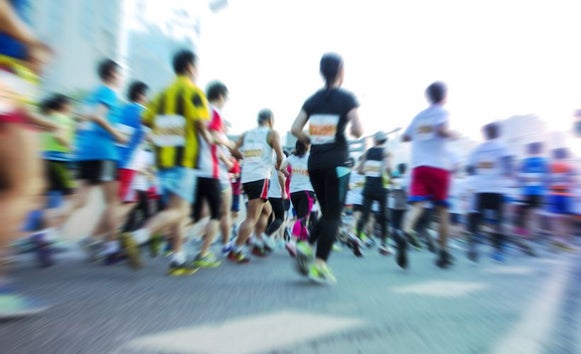 Race Lesson Learned: It’s probably not smart to race two marathons in less than two months—even if one of them was a free entry.

The Price Of A Free Bib

“It’s meant to be, Matt! I’m doing it!” I exclaimed excitedly.

“I really don’t think this is a good idea, Steph. You’re going to get hurt again,” Matt replied.

In hindsight, I wish I had taken the advice of my husband. Instead, I am a firm believer that all things happen for a reason. So, when I was asked to coach the CES Chicago Marathon training group after recently winning a free entry into the Chicago Marathon, I chalked it up to fate. I said YES…to both! I didn’t stop to think about why and how I’d won that free entry, and that’s where our story begins.

In January and February of 2015 I had two back-to-back PR-busting half marathon races. I felt on top of the world. I was faster than I’d ever been before, and I got greedy and set my sights on a BQ. I hurtled myself into an intense marathon training program for the Chicagoland Spring Marath’on. One month into my plan, my knees were not having it. Ever since my first marathon in college, I have intermittently experienced “runner’s knee.” So this pain was nothing new for me, but my response was different; I refused to stop running.

I struggled through 20-mile training runs, my knees in excruciating pain after only one mile. I resorted to cheesy motivational memes to keep me going: “Strength comes from pain!” and “Suffer ’til you succeed!” However, during one particularly challenging long run, I was barely able to keep a 10-minute mile pace. I realized that despite my Nike shoes…I just couldn’t DO IT.

I was admitted into physical therapy the next week. The prognosis? Weak hips. I soon discovered that this is a very common ailment among female runners. After only one month of therapy, I was already seeing progress. But my PT informed me that the Chicagoland Spring Marathon was out of the question. I was disappointed, but I knew that my health needed to come first. Instead of that marathon, I focused on getting strong and training for my first half Ironman on August 9, 2015. (I know what you’re thinking! BUT, to my credit, I had already registered for the half Ironman before my injury!) I finished physical therapy and made a full recovery–just in time for my half Ironman. After an incredible race, I once again became greedy. Since I was fully healed, I figured I could still qualify for Boston. Matt and I decided to run a marathon the week before our wedding, which was barely two weeks after the half Ironman (as you know from my post Pre-wedding (Race) Jitters, that was not our best idea).

Related: A Story Of Tackling Pre-Wedding Jitters With Running A Marathon

So, just six weeks after that pre-wedding marathon and eight weeks after the half Ironman, we arrive here: at the Chicago Marathon, with my FREE entry! I realize I’ve given a huge back story leading up to how I obtained that fateful entry. I promise that it was all (pretty much) relevant. And now: on to what you’ve all been waiting for. That free entry was from none other than…my PHYSICAL THERAPY clinic! Can you believe it?! The very clinic that got me healthy enough for the half Ironman also served as encouragement for me to do another marathon!

As you may suspect, the marathon did not go well. I started off at a respectable pace: I was able to stick in the 8:20- to 8:30-mile pace range for more than half of the race, motivated along by my Fleet Feet racing team members and my biggest fan, Matt. However, right as I entered Chinatown, my knees gave out. I struggled through the final miles of the race, finishing in just under four hours.

Despite my less than ideal race performance, this marathon taught me such important lessons. I have learned to prioritize my personal health above all else, even if that means turning down a free race entry. I incorporate strengthening and stretching into my daily routine, to ensure that my knees and hips can handle my high mileage training plans. I have also learned that it’s impossible to demand my body to produce PR-busting, BQ qualifying results in every race. And finally, I learned that sometimes husbands truly do know best.

3 Exercises To Strengthen Muscles Around Your Knee

A Runner’s Guide To Hip Pain And Causes

Everything You Need To Know About Runner’s Knee