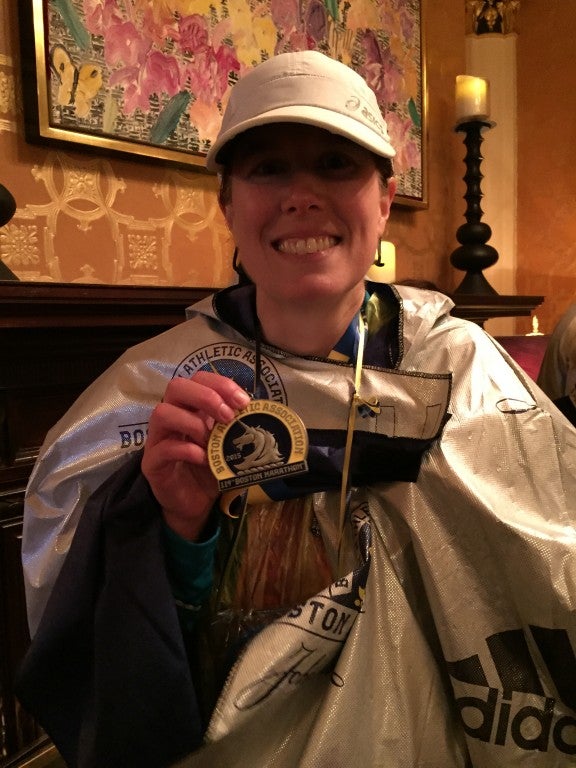 I’m still in a fog of sensory overload after Monday’s Boston Marathon, my first 26.2. Luckily it’s a cloud-nine kind of fog, having made it through the race without injury and feeling better than I had imagined was possible (my time was 4:55:22). Here’s a sampling of what I learned and experienced on my marathon journey.

I only had six weeks to train after getting an invite from Clif Bar, a new nutrition partner with the marathon. I’m from the Boston area, so I knew enough that I couldn’t turn down the offer to participate (it’s Boston, baby!). While I can’t recommend such a short training window, I was incredibly lucky to make it without injury. The taper gave my body the healing time I needed to run fresh on Monday.

RELATED: 6 Weeks To My First Marathon

I interviewed ultrarunner Dean Karnazes last year, and some of his words stuck with me: For first-timers, he recommends running without a time goal. I also went into the race having done a lot of run-walk research since I knew I should be open to that, given my short training schedule. It’s hard to know how your body will react over 26.2 miles, so my main goal was to keep the run as comfortable as possible—and keep a smile on my face (I can’t recommend this enough!).

It’s completely subjective how bad any weather is. I chose to not let the rainy, chilly, windy day bother me. I had thought my long-sleeve, short-sleeve, running jacket and capris would be enough, but I picked up a disposable rain poncho at the start, and I was thrilled to have it throughout the race. Not only did it help block the rain and wind, but it helped keep my core at a steady temp.

I wasn’t sure exactly how much to eat and drink, so I was happy to follow the advice of Clif Bar Dietitian Tara DelloIacono Thies. I’d been training with Clif Shot Bloks, which I planned to carry, and water and Gatorade, which would be available on course. DelloIacono Thies told me to eat one chew every 10 minutes, which is one serving per half hour and one sleeve per hour. That’s about twice as much as I’d eaten in training, but I took the advice. She also said to alternate water and Gatorade at aid stations. Since she doesn’t recommend eating a chew while drinking Gatorade, I ended up drinking more water. Throughout the race and at the finish, I felt a lot more fueled up than anticipated, so I think my nutrition directly contributed to the great race.

There are certain things people can’t adequately prepare you for when it comes to a marathon. The first shocker was just how many men would stop alongside the road (especially just after the start) to relieve themselves. Luckily most of the time there were so many spectators alongside the course, it was easy to focus on them: the 20-year-old-looking guy who was pointing at different runners and shouting at them, “I’m proud of you!” or the elderly women huddled under an umbrella and clutching their sign of encouragement or the little girl skipping around her front yard with lips that were ring-pop blue. People were out cheering for as many different reasons as people were running. My smile was reciprocated by so many of them, I got as much of an energy boost from them as I did from those chews.

During the bus ride to the start in Hopkinton, I sat with an amazing woman who raised about $6,000 to fight pediatric cancer through Massachusetts General Hospital. Meghan Connors, who recovered from her own childhood bout with neuroblastoma, isn’t new to fundraising to race in Boston. Last year she ran with her sister, who was blindfolded for the race to bring awareness to the National Braille Press. They have an amazing dedication to helping others, fundraising and running. Many of the spectators were along the course for them, calling these champions for charities the heart of the race. I was humbled and buoyed by their dedication.

I have a friend who ran the Cape Cod Marathon a few years ago when I lived nearby. My husband and I went out to cheer him on and ended up providing the encouragement he needed to keep going through a knee injury and helped him refuel and recover afterward. He wanted to repay the favor at Boston. I had been watching many other runners stop to hug their friends and family along the course. My turn to see him and his family was at the beginning of the hills in Newton. Luckily I wasn’t having troubles, but my friend ran with me a little. Not only was his recap of the elite races that had finished exciting for me, but another runner tucked in with us to hear what had happened.

Whether people at the race are from the city or not, during the Boston Marathon it’s as if everyone is an honorary Bostonian. Boston Strong is not just a catch phrase, and the inspiration cannot be underestimated. But this energy boost isn’t only from spectators! The number of volunteers throughout the race, beforehand and afterward was completely amazing. Without them the race couldn’t happen and at no other race before was that fact as clear to me. I needed that water and Gatorade at almost every mile. They braved the elements for hours. I was especially happy to see those at the finish line doling out Gatorade’s chocolate recovery drink and protein-rich Clif Bars as well as medals and ponchos to help everyone’s immediate recovery.

I was lucky enough to have a massage the night of the race, so I was pretty shocked to be able to walk right down the stairs the next morning. I’m sure my good nutrition during and after the race (carbs and protein within 30 minutes) helped too. I’ve found that the more I keep moving this week, the better I feel. I haven’t actually gone for a run yet, but I feel the urge building.

I hadn’t given running a marathon much thought before six weeks ago, but now I can’t imagine not doing another. I definitely want to complete a full training plan first, and I’ll try to enjoy a new 26.2 for all it has to offer. It would not be fair to compare it to Boston!

Jordan Hasay is “Raring to Go” for the Boston Marathon