As the lead pack dwindled, the 2016 USATF women’s open cross-country championship came down to a pair of veterans. At the top of the course looking out over Bend, Ore., Mattie Suver (2015 runner up) made her move and pulled away as Amy Van Alstine, (2014 winner) was unable to hold on.

The lead pack of the five ran together for much of the race, but Suver and Van Alstine broke away around the 8K mark. Van Alstine came in second in 36:45, followed by Cally Macumber in 36:55. 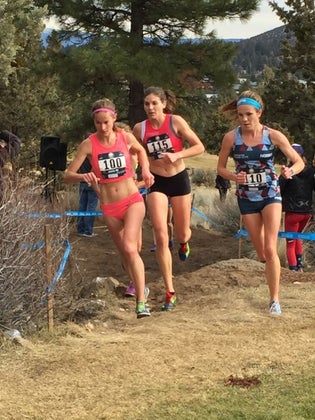 “I love cross country. It’s one of my favorite distances or specialties so any opportunity that I get to run a cross-country race, I try to snag on that,” said Suver. “I was hoping for the win, but obviously Amy is a very tough competitor as well as Cally and a bunch of the other women out there so I wasn’t sure how it was going to play out.”

After the race, Van Alstine said, “I was disappointed, but Mattie was just tougher out there today.”

“10K is pretty long for cross country,” said Suver, who explained her desire to stay conservative for the first two laps on a challenging course set by Max King. Prior to 2016 the race was contested at the 8K distance, but when the IAAF decided to adjust both the men’s and women’s races to 10K, USATF made the switch as well.

Suver trains in Colorado Springs with the American Distance Project. She hopes to race the 10,000 meters at the Olympic Trials at Hayward Field in Eugene, Ore., this summer.

“This is kind of just starting, getting the ball rolling and getting the momentum going all looking for the 10K on the track coming up in July,” said Suver. The junior women’s race was won by high school sophomore Melissa Berry of Eugene. Berry wanted to run another cros- country race, even as she prepares for her track season. Berry won the 6K race in 23 minutes, 55 seconds.

“I wanted to do it just for fun and I just thought it was going to be like another race,” said Berry who hadn’t yet mentioned the race to her track coach.

Berry runs the 3,000 and 1,500 meters for Sheldon High School and was the 10th place finisher in Oregon’s 6A state cross country competition this past fall.

Berry said, “In December, my dad found the race online and I love cross country and I really wanted to do this race because it was a good start into my track season.”