We began our day in bustling Jerusalem, but within half a day’s drive, we were transported to rural Upper Galilee, the northern tip of Israel where if you squint, you can see the fence to the Syrian border just over the hills.

The late spring sunlight hung in the air as Steve Godwin, Women’s Running’s video producer, and I, tucked into dinner at a cozy kibbutz waiting for the Mountain to Valley Relay to commence. In order to accommodate the 7,200 runners who cover 130 miles of mostly singletrack terrain, the relay has two sets of waves: late night and early morning.

At sunset we headed to the park in Tel Hai, which was already buzzing with runners, ready to go. On the surface, the race looks like any team relay you’d find in the States—and this makes sense seeing that the race director was inspired by the U.S. running scene while living in Vermont.

But while the blueprint is largely the same, subtle differences soon emerged. The racers, sporting headlamps and reflective vests, fueled up with poppyseed bread and tea made from freshly picked mint. For pre-race pictures, teams gathered around a massive stone lion, placed to remember eight Jewish residents killed in a Bedouin conflict. Later, we’d learn that a widow of a soldier kidnapped by Hamas terrorists was running in the event.

Another difference? In the U.S., more than half of the runners are women—but the crowd at the start line was predominantly male. The race director believed that this was because women were spooked by the idea of running on a trail alone at night. Looking around at the women who were getting ready to run, however, I wasn’t sure this was the case.

When we asked runners (of both sexes) why they chose to race Mountain to Valley, we found answers that are universal: They ran to be fit, to bond with friends, to push themselves beyond preconceived limits.

If anything, these runners were excited by the idea of running under the stars. My guess is as the sport grows in Israel, so will the female contingent. The one thing the runners were all worried about: how the next 24 hours would fare, as they’d sweat through miles, across steep, pat dirt trails for one hour, and then stuffed into a station wagon of sweaty runners the next. 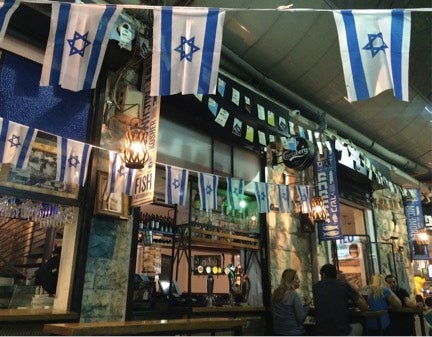 The relay takes runners through the verdant hills of Upper Galilee, across 130 miles of trails into to the meadows of Jezreel. Teams comprising eight runners tackle a total of 24 legs—meaning everyone runs during the heat of the day and everyone runs at night.

Steve and I followed along to see what the race was like for the runners on the ground. The magic of Mountain to Valley is that it’s on trails. Not only can teammates enjoy a wide swath of Israel, but they can see the country in a way that’s locked off to cars or even bikes.

Running the seventh leg from Bnot Ya’akov Bridge to Karkom was stunning. From a pat dirt path, snaking along a cliff, I could see the Jordan River below, and in the distance, the turquoise mouth where it opened into the Sea of Galilee. I couldn’t help but think that I was striding down the same paths cited in the Bible and the Torah. Runners were strung out on this stretch, as the twists in the trail made me feel like a tiny speck in terms of both landscape and history. 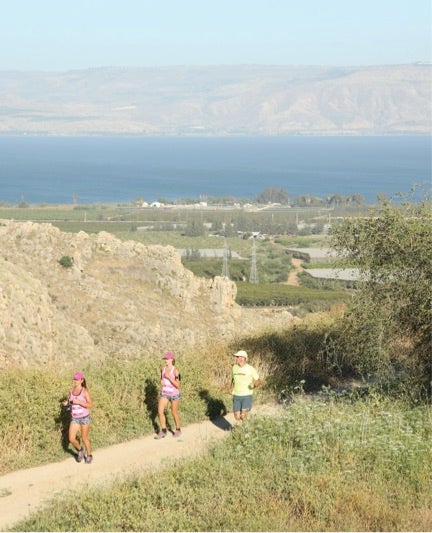 The exchange points have a way of snapping runners back to reality. Filled with cars and cheering teammates, they are part party, part campground, and each has its own flavor.

We visited what would be our favorite station just before dark. At the end of the 11th leg, runners meet in the Arab village of Ilabun. The tensions between Israeli Jews and Muslims are well documented, and the very existence of isolated “Arab villages” is testament to the fact that this friction is still very much a fabric of the nation. But the early evening air at the Ilabun aid station was filled with warmth and positivity. Locals greeted passing runners with music and dried dates—later hot soup would be served.

Many of the race volunteers were teenagers. One older boy told me he liked the relay because it helps people in the community become exposed to running (only two of the 950 teams identify as Arab Israeli). A group of girls was too shy with their English to be interviewed—but they knew at least one international phrase and asked me to pose for a “selfie.”

Later at another checkpoint located outside a second Arab village, runners warmed up with coffee and tea inside of tents filled with chairs and sleeping mats. Teams rested before running through the night across fields lit by stars and into the sunrise. 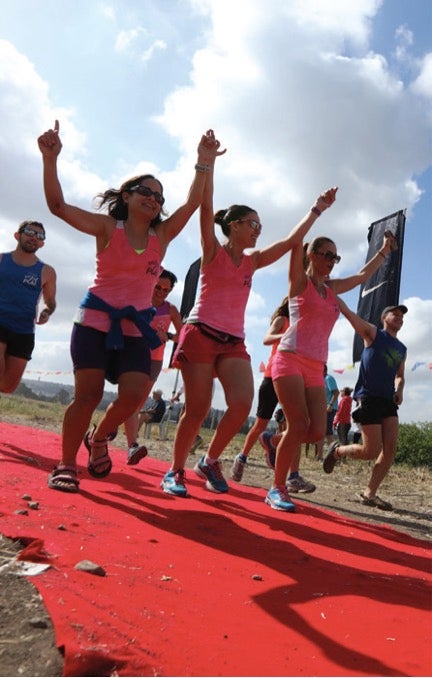 Our plan for day two was to head straight for the finish line to capture the first runners to complete the race. But our guide, Sharon, decided she wanted to run the last leg, so I jumped in with her. Having never covered more 5 miles—and almost never on trails—for Sharon, this 6-mile leg encapsulated the challenge that many of the racers felt regarding the relay as a whole.

We climbed a massive hill at the start of the leg and continued through forests and along farm trails (complete with cow crossings). When we reached the last mile, Sharon was beaming.

Her happy energy reverberated around the finish-line village, where runners lay in the shade. The thousands of people lounging in the field may have run through biblical cites and divided villages, but runners around the world are identical at a finish: sweaty, tired and glad to be done.

TO SEE THE RACE IN LIVING COLOR, CHECK OUT OUR VIDEO SERIES “ISRAEL ON FOOT.”

Trailer: What’s It Like To Experience Israel On Foot?