Shalane Flanagan has announced she will not be running this year’s Boston Marathon—her beloved hometown race—due to a recent injury. She took to Facebook to share the news and disappointment.  Flanagan has run the Boston Marathon three times and has made it widely known that a goal of hers is to win the iconic marathon. 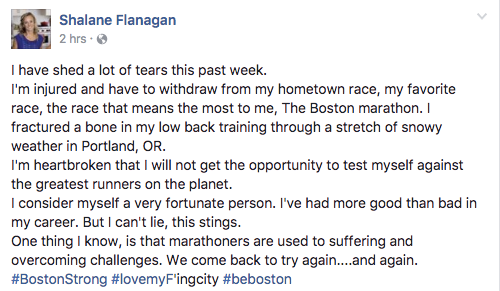 This injury comes after some huge performances in 2016, including finishing third at the U.S. Olympic Marathon Trials—in a dramatic race to the finish—and sixth at the Olympics in Rio.

We join the running community in wishing Shalane a fast—and healthy—recovery and hope we get to see her toe the start line in Boston next year!

Elites To Watch As We Approach The 2018 Boston Marathon

No Retirement For Shalane Flanagan–She’s Running Boston, Instead