Suzie Lofft crossing the half marathon finish line in 1979. 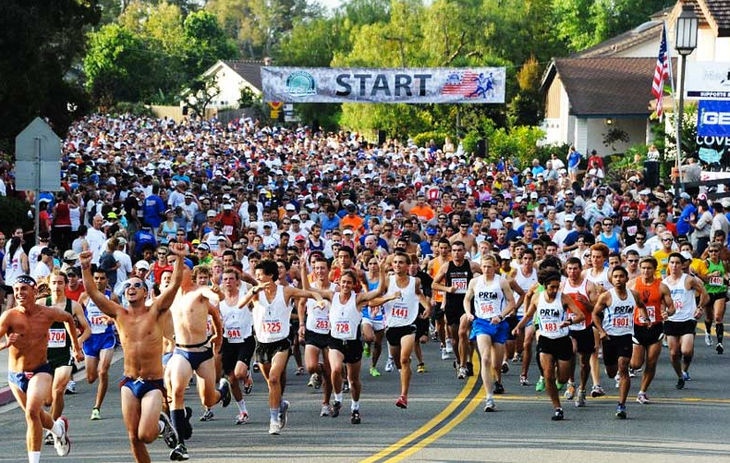 Scripps Ranch To Race On July 4th For 40th Year

There’s a small town in Southern California that has one of the most colorful 4th of July celebrations around. There’s a parade, a beer garden, races for runners and bikers and people everywhere sporting red, white and blue.

So what makes this particular town’s festivities special? The answer is simple: every part of the celebration is seeped in tradition. Since Scripps Ranch’s founding in the early 1970s, neighbors have discovered or invented reasons to gather in displays of community strength and friendship. If Scripps Ranch residents aren’t meeting to recognize a national holiday, they’re busy planning a picnic or outdoor concert at the community’s unofficial meeting grounds in Hoyt Park. The park is where the bulk of the 4th of July celebrations take place: it sits at a busy corner of the popular parade route, it hosts the annual post-race beer garden and it welcomes athletes for hours as finishers in the 2-mile, 10-kilometer and the 12-, 28- and 50-mile bike races cross the finish line.

This year, the community is celebrating the 40th anniversary of these races, a milestone that the Scripps Ranch Old Pros likely didn’t imagine reaching when they started the tradition with local realtor Dick Logan in 1978. For 40 years, the Old Pros have watched the race grow, giving back to their community by recycling the funds gathered on race day and putting the money towards local youth and high school sports programs. Though that first year’s run was dominated by adult runners, the races now welcome kids to run in the 10K and 2-mile distances.

Those that have participated in the USATF-sanctioned 10K identify it as one of the most fun races of its distance. The fun starts right at the starting line, as runners in red and blue tutus bounce on their toes to warm up before the starting gun fires. In recent years, a squad of male runners have raced in Speedos, whooping and hollering at the start as they pump themselves up for the run. Some participants have painted their entire bodies red, white or blue in a more daring display of national pride. Once the race begins, volunteers announce times at each mile marker, cheering the runners as they circle the picturesque Miramar Lake and sprint the final downhill stretch. Most runners are repeat participants, returning to Scripps Ranch in early July to celebrate community and tradition through running.

Suzie Lofft is one such Scripps Ranch resident who has participated in several of the Scripps Ranch Old Pros 4th of July 10K races since the 1970s. Her history with the race goes back to 1979, when the race was actually a half marathon. That year, she was the first female finisher. When the half marathon distance was traded for a 10K in 1982, she began running those races as well, collecting several bibs over the years while her husband, Will, volunteered along the route or biked his own races. “I was surprised,” she said of her 1979 first-place finish. “I guess I could run faster than other people. I just ran as hard and fast as I could. I was pretty stoked when I finished–and pretty tired.”

Though running wasn’t Suzie’s main sport—she also played tennis and soccer—it was an activity she shared with several friends. With the passage of Title IX earlier that decade, women across the country were beginning to lace up their running shoes and register for races. “We found out we were supposed to be running, that it was good for us,” Suzie said. “We were a pretty healthy community–very active. We have a club [in Scripps Ranch], so people play tennis and swim, and we had soccer leagues for women and guys. There were quite a lot of women running.”

The official Scripps Ranch Old Pros 10K archives show a healthy number of women chipping away at the course record throughout the decades. The current female race record was set in 2013 by Natasha LaBeaud Anzures, an Olympic hopeful who lives in San Diego. Her 2013 time of 32:51.9 was nearly one minute faster than the previous record set in 2010. Though she didn’t run with the intention of setting a record, the time still stands as her personal best for a 10K. “It was just one of those days where training was going well,” Natasha said. “There are two ways that race can go: it can either be baking outside, where the sun is out and you’re roasting under a little magnifying glass, or the cloud cover comes in. I was really lucky: it was cooler and the clouds were in, which makes a big difference. I remember going out quickly with some of the guys, just kind of latching on, and really making a strong push at that last downhill section.”

The race’s final downhill stretch and general lack of hills is popular with most runners. But the thing that stands out most to Natasha and the Loffts is the atmosphere. “I really like that finish line at the chute,” Natasha said. “It’s such a community feel! Everybody’s cheering. It’s a fun neighborhood.”

“That day in the park, you kind of get transplanted to some imaginary place,” said Will, who continues to participate in the 4th of July races as a cyclist. “The community’s amazing. It’s a very special day.”

Though Suzie has an injury that will prevent her from racing this year, the spirit lives on with her children and grandchildren. “Our granddaughter ran it for years. She stared winning this race in her age group when she was 6. Everybody runs, everybody’s family runs. It’s neat to see it grow like that. You see so many different kinds of people running.”

The race has certainly grown: while 138 runners competed in the inaugural 1978 half marathon, the 10K saw 1,222 finishers in 2016. As the community celebrates 40 years of holiday running this year, participant numbers are expected to hold steady. “You come in after a hard workout and you’ve got your friends in the beer garden,” Will said. “Most importantly, you’ve got all your friends’ kids. They all come back for the event. You get a chance to reconnect. It’s really very special.”