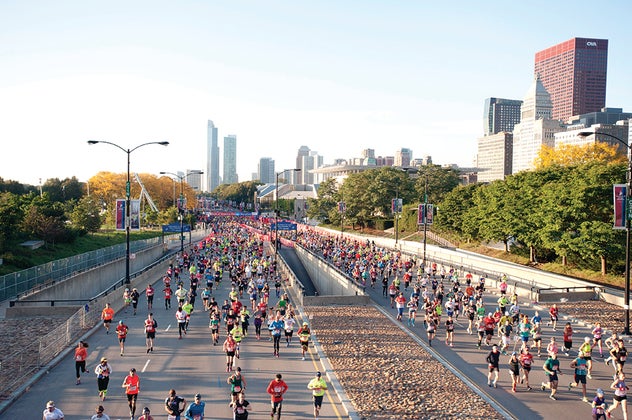 Although half marathons get more attention nowadays, running a marathon is still a very noble pursuit. Whether you’re crossing races off your bucket list, looking to qualify for Boston or earn a PR on a pancake-flat course, there are many races out there just for you. Here are our favorites for 2017—taking place in big cities, small towns and scenic trails.

What a way to start the year: The Walt Disney World Marathon celebrates its 20th anniversary this year, and the race that first helped popularize the destination marathon/vacation combo is still going strong in 2017. Enjoy a fantasy-filled course that covers four of the Disney World theme parks, including the Magic Kingdom, Disney’s Animal Kingdom, Disney’s Hollywood Studios and Epcot.

Take in California’s longest stretch of uninterrupted beachfront at this annual marathon that celebrates the state’s surfing culture. Comfortable winter temperatures and that view of the Pacific much of the way make this a popular getaway marathon for those in snowy climates—or just about anywhere. Listen to surf bands along the course and realize that all of those cold, middle-of-the-winter long runs were worth it.

Experience southern hospitality at its best in this midsize marathon through downtown Birmingham. The two-loop course is offers a nice tour of the city, with trips past the Civil Rights Museum and the University of Alabama Birmingham campus. The course offers a few hills, but nothing too strenuous, and the post-race barbecue will help you with the recovery.

Known as the “biggest little marathon in the west,” the Napa Valley Marathon celebrates its 39th anniversary this year. The point-to-point course highlights the incredible views of the Napa Valley, while race organizers ensure a high-end road racing experience. Enjoy the views of the vineyards along the route, and then spend a few days afterward sampling.

If you’ve never been to Asheville, N.C., this race is a great reason to visit the scenic town in the Blue Ridge Mountains. The race takes place on the grounds of the Biltmore Estate, the largest privately owned home in the United States. The chateau-style home, built by George Washington Vanderbilt II in the late 19th century, will amaze you. But the scenic course on the grounds features packed dirt trails, hardwood forests, meadows and formal gardens to explore. 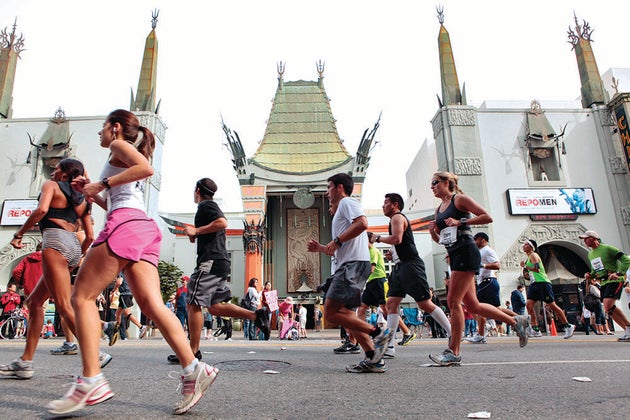 This annual Los Angeles race draws more than 25,000 runners from all 50 states to enjoy a scenic point-to-point course that starts at Dodger Stadium and includes many of the city’s landmarks along the way, including West Hollywood, Chinatown, the Financial District and Beverly Hills. The finish line in Santa Monica overlooks the Santa Monica Pier, where you can enjoy a post-race drink as waves roll in across the Pacific Ocean.

Perhaps no city is better known for its music than Nashville, and this 18th annual stop on the Rock ’n’ Roll tour in the Music City offers one of the best chances to combine music and running in the country. Formerly known as the Country Music Marathon, the event features an impressive tour of the city, plenty of local musicians that highlight the diverse music scene and a headliner concert to cap it off.

Yes, it’s an odd name—a shout-out to the city’s historical nickname of “porkopolis” when it was a center of agricultural commerce in the 1800s. Cincinnati has changed, but this 19th annual event has long been a favorite of Midwestern runners. You’d be hard-pressed to find a race focused more on the fun surrounding the marathon, and the tour of Cincinnati’s neighborhoods is a great way to see the city. The first half features some climbs, but you’re rewarded with a gradual downhill over the second half.

The capital city of Washington State is home to one of the more popular marathons in the northwest. This will be the 36th year that Olympia hosts this annual marathon, which shows off the downtown with a scenic course filled with rolling hills. After the race, the post-race party continues the celebration of running with food, drinks, music and massages.

This year marks the 20th running of the race that stated the Rock ‘n’ Roll running series. The original location is still one of the most popular events in the country, and runners will once again get a spectacular tour of San Diego—including Balboa Park, Old Town and other historic neighborhoods—all while enjoying the great music along the way that helped launch the series. If you’re looking for a late spring or early summer event—and there’s also a half marathon and 10K—head to America’s Finest City, where  the weather is always perfect and there’s plenty to do.

This small town nestled in the Adirondack Mountains has seen more than its share of sports excellence. The host of the 1980 and 1932 Winter Olympic Games, it’s where speedskater Eric Heiden won five gold medals and the U.S. Hockey team celebrated its Miracle on Ice. The marathon, which starts and finishes at the Olympic Speedskating Oval, offers incredible mountain views the entire route.

You don’t find a lot of big-city marathons in the middle of July, but San Francisco’s cooler summer temperatures make this an excellent option for runners looking for a big mid-summer marathon. This year marks the race’s 40th anniversary, and runners will get an excellent tour of one of the country’s most scenic cities, including running across the Golden Gate Bridge. Expect some hills, although the loop course isn’t as tough as it could be.

This annual marathon at the Wright Patterson Air Force Base in Dayton, Ohio, routinely draws more than 15,000 participants from all 50 states. Runners can expect to be treated to a flyover before the race and see pieces of aircraft history along the course—make sure to visit the onsite museum after the race. Because it’s mostly on an Air Force base, you won’t find big crowds along the route, but the volunteer support is excellent. There’s a reason that the Twin Cities Marathon is known as the “most beautiful urban marathon in America.” The trip between Minneapolis and St. Paul takes full advantage of the many parks in the Twin Cities, and for an urban course you’ll find an incredible amount of green space—filled with fall colors. The downhill finish past the Cathedral of St. Paul and in front of the state capitol is one of the best you’ll find in the U.S.

This year marks the 40th anniversary of runners traveling from around the world to Chicago for its flat and fast course in hopes of a Boston-qualifying time—or at least a PR. Each fall the 45,000 participants discover a fun tour of the city’s diverse neighborhoods with huge spectator support the entire way. The loop course starts and finishes in Grant Park, making this one of the logistically easier big-city marathons for out-of-towners.

This year marks the 46th running of the Portland Marathon, which has become one of the best races in the Pacific Northwest. Starting and finishing in downtown Portland, the course crosses the Willamette River twice and offers a nice tour of the city, including the scenic riverfront, Old Town and residential neighborhoods. Few marathons offer more giveaways than Portland, with a long-sleeve T-shirt, finisher medal, collectable coin, poster and a tree seedling to plant, among other swag.

This is a great race to plan a ‘runcation’ around, especially because the event will be run a month later in 2017 and in future years to avoid the heat of September. The course starts near the Maui airport on Ho’okele St. in Kahului and sends runners south toward Maalai Bay and from there they head west and run the second half of the race along the sea to the finish line at Kaanapali on the western side of the island. There’s also a half marathon and the fast and fun “Run Forrest Run” mile race the day before to get your competitive juices flowing.

Chattanooga, located just across the Georgia border and surrounded by rolling mountains, has become an outdoor Mecca in the southeast. The Seven Bridges Marathon has grown along with the city, and offers multiple river crossings via—yes, seven bridges—over the Tennessee River. Runners will find out why Chattanooga is nicknamed the Scenic City over the course of 26.2 miles.

The best way to see the nation’s capital is to run the Marine Corps Marathon. Known as the “marathon of monuments,” the race offers more sights than a tour bus as it covers Washington, D.C. It also features the kind of support you’d expect from the U.S. Marine Corps, which has been organizing this race since the beginning.

Want a race with international flavor that’s still about as easy to do as any American race? The Toronto Waterfront Marathon shows off Canada’s biggest city with a scenic mostly Lakefront course that’s flat and fast. Get that Boston-qualifying time and then enjoy all the city has to offer. The race is very well organized and offers all the amenities of any big-city race in the U.S. Just bring your passport.

Along with Boston, the New York City Marathon is one of the most iconic running experiences in the U.S. You start by crossing the Verrazano Narrows Bridge, tour all five boroughs, and finish in Central Park amid overwhelming spectator support throughout the race. It’s a must-do for any runner. However, the toughest part might just be getting an entry—the lottery closes this year on Feb. 17. 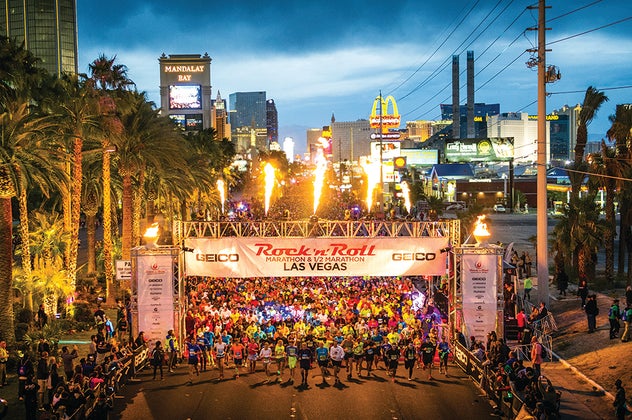 Viva Las Vegas! The Las Vegas Strip shuts down every fall as runners take over the city at this nighttime marathon that is like no other in the country. In addition to the music along the course, a headliner concert and perhaps the best post-race party around, you’ll also find countless people running as Elvis, getting married, and generally doing things that they hope will stay in Vegas.

Florida’s oldest marathon celebrates its 46th running on the east coast of the state near the Kennedy Space Center. The space-themed race includes those running in costume, space props along the course and at aid stations and space shuttle finisher medals. But even if you’re not about to dress up as John Glenn (or Darth Vader), the race offers a very scenic, mostly flat course with fine views of the Atlantic Ocean.

This fast course in California’s capital has long been known as a favorite for West Coast runners looking to qualify for Boston. The 9,000-person race is solid all-around with great spectators along the scenic course—usually with good weather too. The race prides itself on being organized by and for runners, and it shows. 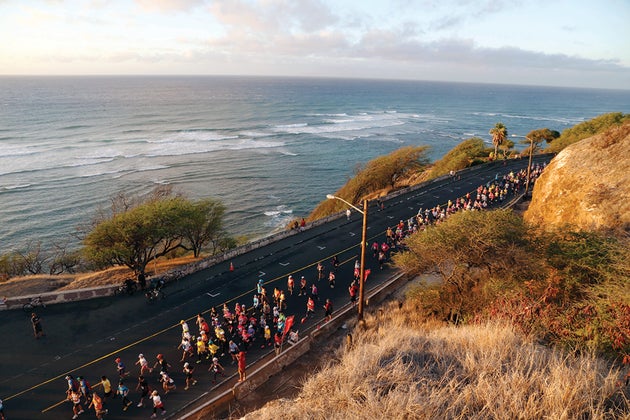 If you’re going to do a destination marathon, why not go all in? Who doesn’t want to end the racing season with a trip to Hawaii? The Honolulu Marathon draws 30,000 people from around the world to enjoy the spectacular course and the Oahu’s amenities. Arrive early for the Friday night luau before the race. Stay afterward to recover on the island’s beautiful, famous beaches.