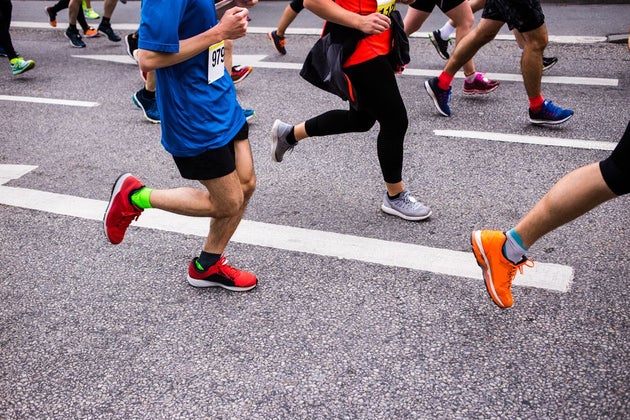 Racing The Capital City Half

For someone who grew up in Columbus, Ohio, I’m a very poor ambassador of my city. I’ve been to my fair share of sports games—Buckeyes, Clippers, Blue Jackets and the Crew—but I’ve never ventured too deep into Columbus, off put by its size and my inability to go anywhere other than the glorious shelves of the German Village Book Loft.

That only increased my excitement ahead of last month’s Capital City Half Marathon. Despite the lingering flu virus I’d picked up, I was eagerly anticipating the 13.1-mile tour of Columbus. It would be my chance to properly tour my hometown.

Now, I’m a strong proponent of exploration through running, and I don’t often get to do so in the middle of major roads that are lined with smiling faces and cups of water. So, Cap City was already shaping up to be exciting. Flu or no flu, I knew it would be an enjoyable adventure.

That adventure started with the drive downtown, which was slow going and much longer than anticipated. I arrived a little flustered and a lot behind schedule. There’s always a bright side, though—and, ironically, the bright side of this experience was having the flu. I had decided the night before that I would run the race for fun instead of racing it. That meant I didn’t have to worry about missing my warmup or my pre-race trip to the restroom.

Instead, I ran straight to the starting line, located by the Columbus Commons, which is the small park that hosted the pre- and post-race festivities. Once the gun went off, we took off in the direction of the historic German Village. From there, we wound back to the Arena District and up to Ohio State University. By the time I reached the campus at mile 6, I was heavily relying on the crowd’s support to buoy my feverish body. I was touched by the number of residents who popped out of their houses to urge the runners onward.

After mile 8, the course shifted downhill and I was greatly appreciative, but also greatly deceived. There, on the cusp of mile 12, I caught sight of a long, gradual hill over the river. Once I conquered that, I turned onto a long, quiet straightaway that led to the finish line. I didn’t know quite how long, so I just kept going and going until I finally lurched across the finish line. Make no mistake: the city is beautiful. The course, on the other hand, is a little rough around the edges.

What do you need to know about the Capital City Half Marathon? For starters, the people are what make the race. I’d be remiss if I didn’t mention the long lines for the gear check and restrooms, but waiting at the end of each line was a grinning volunteer ready to offer a lively “Good luck!” Though the crowd presence during the race was not overwhelming, the people I did see were faithfully encouraging each runner by name.

Columbus is a great city to see and an even better city to run. While the Cap City Half Marathon isn’t my vision of a perfect race— illness aside— it is an excellent representation of the city: Diverse, cheerful, and unyielding. And that makes me proud to be an Ohioan.

A Half Marathon Training Plan That Works For Every Runner

The Mental Approach You Have On Race Day Is Everything

Race Tip: If Something Feels “Off,” It’s Worthwhile To Visit A Doctor

Everything You Need to Know About the 2022 Chicago Marathon