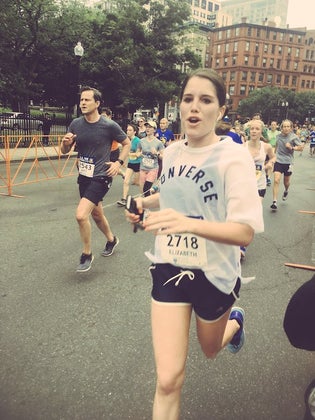 Let’s make one thing clear: When you’re running a race in Boston, your trickiest rival is the weather.

Nowhere was that more starkly evident than this year’s Boston Marathon—or, as a shirt I saw on Sunday said, the Boston “Monsoon-athon.” I watched safely ensconced in an apartment in Kenmore Square, venturing out briefly to catch a soggy glimpse of Shalane Flanagan before returning to the warm, dry indoors. After a vivid reminder of Mother Nature’s unique temperament on race days in Boston, I watched this Sunday’s B.A.A. 10K draw closer and closer on my calendar with not a small dose of nerves.

Mentally prepared for 90 degrees, I began to run through my worst-case scenarios. Hydration tablets? Dumping the cups at water stops on my head? Except, in the end, we totally lucked out (and probably got the weather every Boston Marathoner dreamed of): 60s and overcast at the start. The humidity was high, but I wasn’t complaining.

The 10K starts and ends in the Boston Common, a short walk from my apartment, so I headed on foot to the beginning of the race. I was far from alone—all throughout my neighborhood, runners emerged along the main street with bibs pinned to their shirts and a slightly dazed, “Are we really up this early on a Sunday?” look on their faces.

The start itself was organized chaos. It had all the hallmarks of a Boston Athletic Association race: people everywhere, Boston Marathon gear on almost every other runner and a decently executed system for organizing the more than 8,000 runners participating.

The 10K is less strict than the Marathon in terms of the pulse start. Runners are asked to self-select into groups that correspond with the mile times they expect to hold over the race and, for the most part, I think participants complied honestly. There’s a slow release of runner groups after the elites go off, and all in all, I was across the start about three minutes after the gun sounded.

This year’s elite field felt especially poignant with the return of Des Linden, racing in Boston again after her historic Marathon win in April. The field was announced at the beginning of the race, and the roar from the crowd when Linden’s name was called reminded anyone who may have otherwise forgotten that the first female American Boston Marathon winner in 33 years was among us.

Once you make it across the start line, the first mile or two consists of a lot of jostling for position. The streets are closed off, but they’re narrow to begin with, and cars are still parked along much of the route, shrinking the available ground for runners. Still, as you wind toward Bay State Road, it’s hard not to appreciate the tree-lined route, flanked by Boston’s stately townhomes.

Shortly before the second mile marker, the wheelchair winner zipped by me going in the opposite direction, followed shortly by the leaders from the elite field. They were met by cheers from the runners heading along at a slower pace, excited to see the professionals mere feet away.

As the course turns back onto Commonwealth Ave, you begin the brief hilly portion of the run as it tracks through Boston University’s campus. The climbs are quick and not too steep, but provide an impressive visual of the sheer number of runners competing in the race. The turnaround happens at the 5K mark, a quick hairpin turn that’s almost too quick to register that you’re now on the back end of the course.

Heading into the final 5K, it’s tempting to pick up the pace. I tried to remind myself of a cardinal racing rule: always keep something in the tank when you’re hitting a mid-race downhill—but it was challenging to control my timing as spectators cheered and the famous Marathon overpass on Massachusetts Ave (painted in Boston Strong colors) stretched over the route.

The final miles are mostly flat, retracing the out-and-back to the Common. It was here where spectator support really picked up, and the final kick to the finish was really fun, surrounded by an energetic crowd waving signs and reaching out for high fives from the runners. Almost before you realize it, you’re passing the final mile marker, and the flat route combined with the crowd’s energy are great motivators for a finish-line kick.

I knew as I saw the finish in the distance that I was probably on pace to turn in negative splits, which was exciting, but it was hard not to simply bask in enjoyment of the overall race—the weather, the course, the crowd’s energy. My favorite sign of the day was one that said, “You’re not going to win: so have fun!,” which was a great reminder of the best reason to lace up for any Boston race: the love of the run. 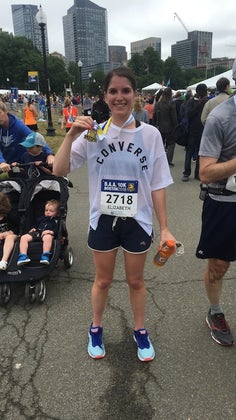 Set A New 10K PR With This Training Plan