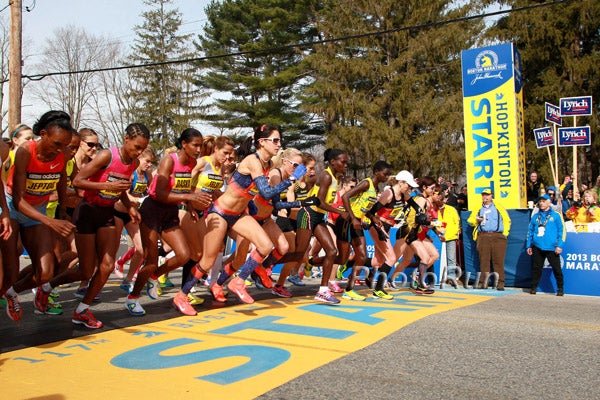 The first Boston Marathon was run on April 19, 1897. At that time, it was known as The American Marathon, with a course that measured 24.5 miles. John J. McDermott of New York finished first out of a 15-man field in 2:55:10. Boston’s now iconic course from Hopkinton to Boylston Street was set in 1924, when it was changed to 26.2 miles to match the Olympic standard.

The Boston Marathon has always taken place on Patriot’s Day, a Massachusetts state holiday commemorating the anniversary of the Battles of Lexington and Concord. Since 1969, the holiday has been celebrated on the third Monday in April. Prior to that year, the holiday and marathon fell on April 19.

Runners have a lot to look forward to along the course. The race starts in the small town of Hopkinton. What follows are 10 downhill miles, known to tire out the legs of anyone who starts too fast. Although Heartbreak Hill is notorious, it’s actually one of four inclines in Newton. But nothing beats catching a glimpse of the Citgo Sign, running past Fenway Park, and making it into downtown Boston.

The crowd support along the Boston Marathon course rivals any other race. From the Wellesley girls offering kisses at mile 13 to town residents tailgating on their lawns, everyone who lives along the route comes out to offer their support.

In 1970, the famous qualifying standards were introduced. At the time, a runner had to prove they could finish a marathon in less than 4 hours. Today the standards vary by age group. Due to the overwhelming popularity of the race, hitting the standard doesn’t always guarantee entry. 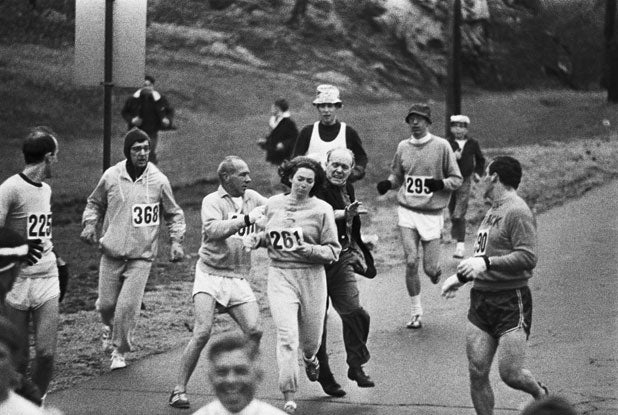 The First Women Of Boston

It was not until 1972 that women were officially allowed to enter the Boston Marathon. However that did not stop some brave women from running. In 1966, Roberta “Bobbi” Gibb hid in the bushes along the course before jumping into the race. Wearing a bathing suit and Bermuda shorts, Gibb finished in 3:21:40. In 1967, Kathrine Switzer became the first woman to receive a bib number when she signed her entry “K.V. Switzer.” Upon discovering a woman running, race director Jock Semple infamously tried to pull her off the course.

In the right conditions, Boston has produced some of the fastest marathon times ever. The men’s course record belongs to Geoffrey Mutai, who ran a then world record of 2:03:02 in 2011. Buzunesh Deba holds the women’s record of 2:19:56, set in 2014.

Every year the B.A.A. kicks off the excitement of Boston by unveiling their annual jacket. First released in 1991, runners eagerly await the release because a different color scheme is chosen each year. This year’s jacket is blue with glow-in-the-dark detailing.

Despite the springtime date, the weather at the Boston Marathon can be wild. A Nor’easter hit the course in 2007. In 2012, the start temperature was 77 degrees, rising to 84 by 3 p.m. In 2015, participants had to deal with a steady cold rain. However those events overshadow the perfect weather that awaits most participants. The average start temperature is typically high 40’s to low 50’s.

In 2014, Meb Keflezighi became the first American male to win the Boston Marathon since 1983. The moment was made even more poignant because it was one year after the horrific Boston Marathon bombings. The last American woman to win was Lisa Larsen Weidenbach in 1985.

A New Era Of Racing

Boston became the first major marathon to include a wheelchair division. In 1975, athlete Bob Hall was permitted to use a wheelchair on the course as long as he finished under 3 hours. His finish, in 2 hours and 58 minutes, ushered in a new competitive field in marathon racing.