Once every four years (or five… thanks, COVID!), our sport takes center stage. The world’s most talented runners, jumpers, and throwers capture the awe and adulation of fans everywhere. Years of training and sacrifice come down to fractions of seconds between an Olympic medal and a lifelong dream dashed. The spirit of the Games is always on full display around the track. Here are some of the best Olympic moments of all time—and fingers crossed 2021 delivers some Olympics history, as well.

RELATED: How to Watch the Tokyo Olympics

History in the Making

At the 1928 Olympics in Amsterdam (above), women were allowed to race the 800 meters for the first time—an important barrier broken for increasing the distance then thought “safe” for female athletes. But when the competitors appeared a little “too taxed” from the effort at the finish line, officials took it as an excuse to eliminate the event again for women until 1960, at the Rome Games. It was there that Wilma Rudolph (below, left, pictured with the women’s 400-meter relay team) became the first woman to ever win three gold medals in track and field. She also became a pioneer in civil rights and women’s rights.

RELATED: Can We Run Away From Politics?

If you’re ever feeling uninspired, just watch the footage of Joan Benoit Samuelson winning the first gold medal for the women’s inaugural Olympic marathon. The moment she runs through the tunnel into Olympic stadium, distance running forever changed for all of us. Along with the 50 other athletes who raced that day, she proved on the biggest stage that women could run as far and fast as they wanted. When Samuelson broke away from the pack at mile three, she never looked back… and none of us have ever since.

Florence Griffith-Joyner showed us that fast can be fashionable. The quickest woman in the world captured attention for her one-legged designer tracksuits and outrageous long nails (paving the way for other trendsetter athletes, like Serena Williams and Sha’Carri Richardson). At the 1984 Olympics, Flo Jo won silver in the 200 meters, but her breakout really came in 1988: She set the 100-meter world record at the Trials (10.49) and came home from Seoul with four Olympic medals—three gold and one silver. Griffith-Joyner died in 1998 as a result of an epileptic seizure.

When Deena Kastor won the bronze medal at the 2004 Athens Games (in triple-digit heat), it was a sign that Americans had a chance to compete on the world stage again. After U.S. distance running languished in the 1990s, coaches Joe Vigil and Bob Larsen decided to bring the athletes with the biggest potential together in Mammoth Lakes, California, to train at high altitude with the goal of winning medals. It worked. Kastor came away with that bronze while Meb Keflezighi ran to the silver.

Nothing at the Olympic stadium is more thrilling to watch than the relays—the collective effort, the pure speed, the potential for disaster. And for those of us who grew up playing team sports, relays caught our attention (and our hearts) every single time. Carmelita Jeter and the 2012 women’s 4 x 100-meter relay didn’t disappoint, setting a world record in 40.82. Then in 2016, Allyson Felix missed the baton handover as she was bumped by a competitor. The team was given a second chance to qualify for the final, competing alone on an empty Olympic track in a surreal time trial. Tianna Bartoletta, Felix, English Gardner, and Torie Bowie (above) went on to win gold from lane one in the final.

Some of the best Olympic moments aren’t wins. American Abbey D’Agostino (at right, now Cooper) and Nikki Hamblin (New Zealand) tangled up and fell during the 5,000-meter preliminary round. The aftermath became a worldwide illustration of the “Olympic spirit” as they helped each other up and cheered each other to finish the race. D’Agostino left the track in a wheelchair and had to have knee surgery.

The Team USA women made big moves at the Rio Games. Emma Coburn became the first American to medal in the steeplechase (bronze) while Jenny Simpson was the first to medal in the 1500 meters (bronze). The American women swept the 100-meter hurdles and Delilah Muhammad took gold in the 400-meter hurdles. Shalane Flanagan, Desiree Linden, and Amy Cragg (above) all finished in the top 10 in the marathon. And the legend Allyson Felix became the only female track athlete to ever win six gold medals, tied with Merlen Ottey as the most-decorated with nine Olympic medals total.

And That Makes Nine 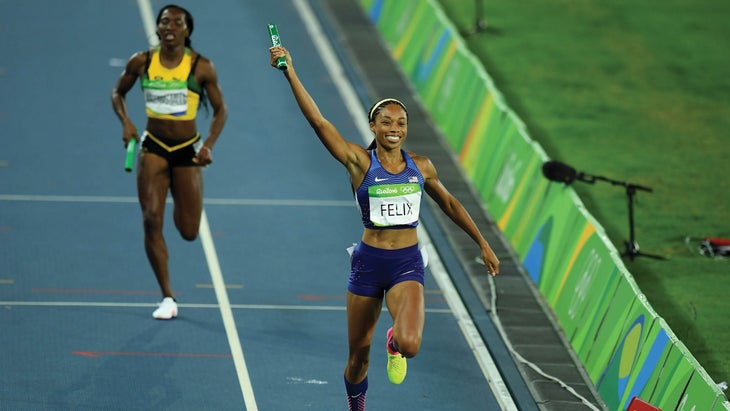 After the 2016 Rio Games, sprinter Allyson Felix (here, winning the 4 x 400 meter relay) upped her overall Olympic medal count to six gold and three silver. By 2019, she had become the most-decorated athlete in world championships history, with a career tally of 17 medals. The GOAT will be competing again this year in Tokyo.

The 2021 Olympic Marathon Course: Everything You Need to Know

Do You Need Reasons to Watch Olympic Track & Field? Here are 5 Good Ones