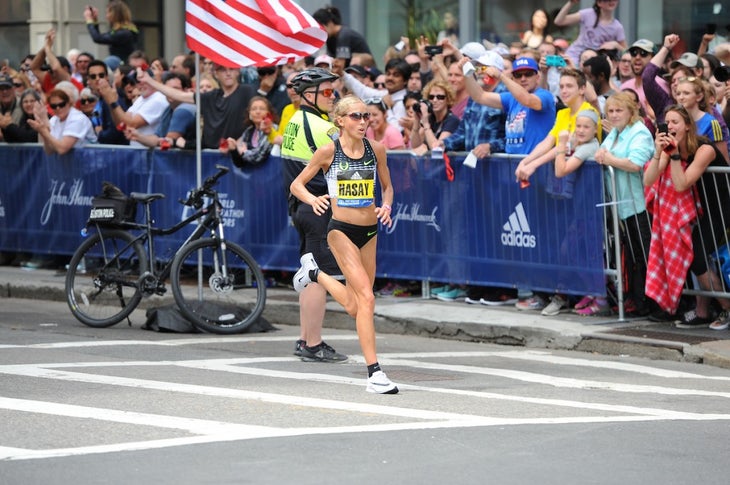 Jordan Hasay And Galen Rupp Are Headlining The Chicago Marathon

Jordan Hasay wowed the crowd during her marathon debut at the Boston Marathon in April—she clocked the fastest American debut time ever in 2:23 flat and looked like a veteran the entire way. Now the 24-year-old Nike Oregon Project (NOP) runner has announced that the 2017 Chicago Marathon will be her fall 26.2-mile event. She will head a deep American field at the famously fast marathon. 1984 Olympic marathon champion Joan Benoit Samuelson will also be running and chasing an age-group world record and sub-3-hour marathon. NOP teammate Galen Rupp, who finished second at the Boston Marathon and ran on the Olympic marathon team last summer, will also be racing in the Windy City.

Hasay is one of many elite female runners with a highly anticipated fall marathon declaration. This will be her second marathon as she continues to get her feet wet on the roads after success on the track. At the Prague Half Marathon earlier this year, Hasay clocked the third-fastest American time ever; only Deena Kastor and Molly Huddle own faster 13.1-mile times. Following Hasay are two other tremendous athletes with potential to dip under that 2:30 mark: Becky Wade and Sarah Crouch. Wade had a great marathon debut in 2013, missing sub-2:30 by less than 60 seconds. Crouch was the second American woman across the line at Boston last year after missing the Olympic Trials Marathon.

Adding to an outstanding lineup of top Americans, Samuelson hopes to be the first woman ever to break 3 hours at age 60. “Storytelling is important to me and it’s how I motivate myself,” Samuelson said. “My race decisions often reflect my narrative. Once I turned 60 I knew that the Oct. 8 Chicago race would represent the next chapter in my career.”

Hasay’s PR in her only marathon is nearly 7 minutes quicker than the next American racing Chicago, and it’s less than 4 minutes off from Deena Kastor’s American record—will she flirt with the mark on this flat course in October?