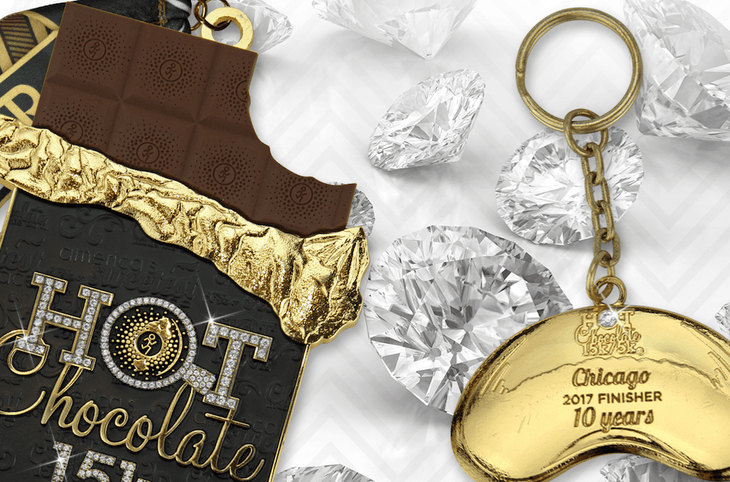 Shine Bright Like A Diamond—At A Hot Chocolate Race

Ten exclusive diamond-trimmed golden race medals  are up for grabs at the MB Chicago Hot Chocolate 15K/5K. And yes, they are valued at more than a whopping $1,000 each. Plus, there’s another 500 diamond key chains available on top of that. What’s better than bling with bling?

“We’re ‘blinging’ in our 10th anniversary in a sparkling and memorable way,” said Steve Ginsburg, RAM Racing’s CEO. “Over one million previous Hot Chocolate runners know our goody bags are independently acknowledged as the best in the endurance industry. For this anniversary, we wanted to do even more. So, in cooperation with our new charity partner, Make-A-Wish, we created the ‘Diamonds For The Decade’ promotion to give runners added incentive to sign up for the [October race].”

The traditional Hot Chocolate 15K race medal, which literally looks like a chocolate bar in its foil wrap, now has 150 single-cut accent diamonds. The glitzy updates will be awarded to 10 runners randomly selected by Make-A-Wish after registration closes in October. Participants increase their chances of earning the diamond medals in any of seven different ways—including by raising money for Make-A-Wish.

A random draw from all registrants will also decide who receives one of the 500 sparkly keychains shaped like Chicago’s iconic Bean sculpture. Each chain includes one embedded diamond.

The return rate at this event is very high, especially with this added incentive. Alumni runners counted for more than 70 percent of the approximately 40,000 participants in last year’s Chicago Hot Chocolate Race. There are also 10 dedicated veterans who have toed the line in all 10 of the chocolate races in the Windy City. The Legacy Experience, which offers a tiered list of extra keepsake free rewards for returning athletes, will reward these 10 individuals a Legacy hoodie, a commemorative photo frame, a special 10-year Legacy medal, a Legacy novelty race bib and one free entry to any race in the 2018-2019 Hot Chocolate 15K/5K Series—dang!

The Hot Chocolate season—everyone loves these events, don’t lie—starts Oct. 1, and the Chicago location is the second race in the 19-city tour. The race is on Oct. 29.