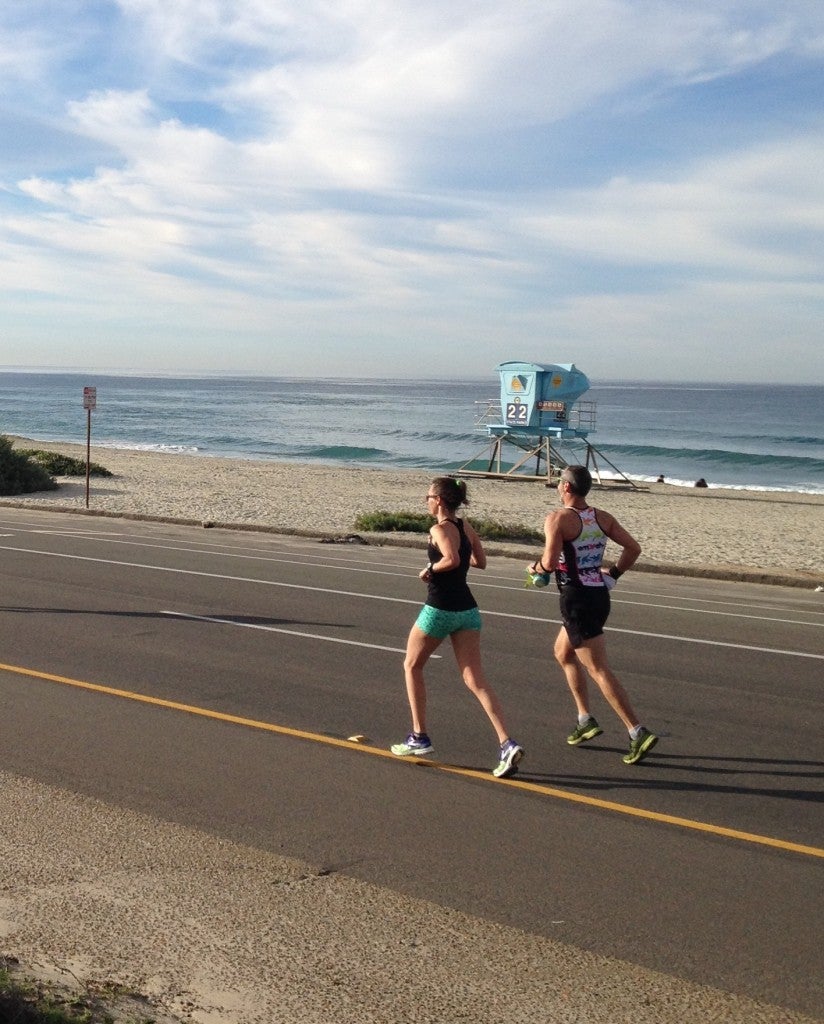 The Carlsbad Marathon is over. And it feels relieving and disappointing and exciting all at once.

Relieving in the sense that I no longer have to rise for 10 miles of intervals every week. Disappointing because, well, it’s over. Exciting because I did what I wanted to do, and I left everything out on the course. I’ve always heard tales of marathon woes and upsets, as well as tales of complete wins over 26.2 miles. I think my own story has a bit of both, but in the end, it was the greatest race I’ve ever run, and I wouldn’t change any of it.

I had to pee really bad when the race started. After a 15-minute delay, I wasn’t able to sprint for one last relief before the gun went off. I had two options: Do it in your pants and run the entire race with wet shorts and shoes, or stop when you can and make up the time later. I opted for the latter at mile 1, skipping the mini line and going straight for the not-nonchalant squat behind the portapotties. My pacer friend, Dave, didn’t see me, but 50+ other runners, an aid station crew and two dudes waiting in line sure did. I lost maybe 40 seconds with the pit stop, which we made up over the next 6 miles.

Things went pretty smoothly through the first 13. I slowed us down around mile 4 when my GPS watch indicated a super-spicy pace, and we hovered around 7:55 the rest of the way. Dave chatted with me about a podcast that talked about a woman who couldn’t feel fear. I am still questioning if it was simply coincidence that he chose to share that one, or if he could sense that I was very slowly slipping into the crap-I-can’t-believe-there’s-still-17-miles-to-go dark hole. Whatever his reason, I was thankful for the distracting conversation. My dad rode up and down the large 6-mile hairpin, where the second half is the largest downhill of the day. He was silent for most of the time, filming me on his phone and hiding emotion behind his dark glasses.

We turned south on the coast for the final out-and-back section of the race, where the turnaround marked mile 18. I was feeling tired, but it wasn’t anything that I wasn’t expecting. Nutrition seemed to be doing its job; I breathed through the usual stomach cramps, and I didn’t need to do a 911 trou-dropping. My friend Sarah popped up on the hilly center divide along the course and snapped some gnarly shots (one pictured above), shouting how proud she was and other flattering remarks about my choice of compression shorts. I knew my boyfriend would be waiting at mile 18 to hop in and finish the race with me. Seeing his face was just as encouraging as I remembered from the day before.

Two miles later, I learned very quickly that the mile-20 wall is a real epidemic, sweeping races across the nation. If you were to watch my life in slo-mo from mile 18 to mile 20, you would see a gradual decline in smiles, waves, energy and just general acknowledgement of anything around me. I don’t remember a whole lot of details of that last 10K, but at the same time I remember everything—the pain, the cheers that blended together, my friend dressed at a woman after he promised to make me laugh at mile 23, the narrowing space to run as we merged back with the half marathon, the strong desire to cross the finish line. I remember all of it and none of it. The only reality I kept in check was I was not quitting. The only thought I thought over and over was, Just keep running.

So I did—I picked off meters between the 3:30 pacer and me, with Dave’s repeat instructions to “keep that intensity” pulsating around in my head. He knew I wanted sub-3:30, but more importantly, he knew I could get there. I put one foot in front of the other as the miles clicked over to 24 and we approached the final turn onto the winding road toward the finish. Dave told me I would enter this euphoric state, where I wouldn’t remember much beyond mile 24 at all. He was right…if euphoric meant tunnel vision, fatigue and a strong desire to punch him in the face for ever making me run faster. If that’s euphoria, he was totally right. As I closed the gap to 3:30 man with a half of a mile to go, he said, “Don’t stick with me,” and something else after that, but that’s all I needed to hear.

I don’t remember the crowds cheering or the loud screams from my mom. I can’t recall what color the finish line banner was or how many medical personnel asked if I was OK after I crossed and swayed into a nearby fence. I’ve forgotten how many waters I drank before exiting the shoot and collapsing onto the ground, trying not to vomit or pass out. But I will never forget those last 100 meters—it was that movie moment I was looking for two weeks ago, when I thought the entire thing was just going to be impossible. I kissed my hand, threw it up to the clouds for grandpa and crossed the line of my very first marathon. In 3:29.