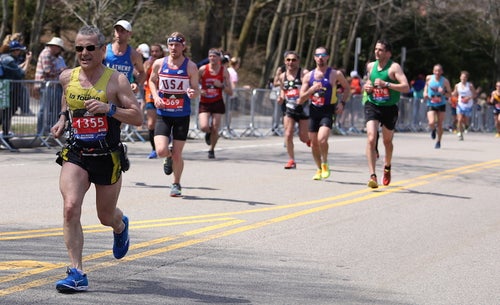 The Boston Marathon is famed for its storied history, its prestige, its emotion—and its course. In fact, the 26.2-mile journey from Hopkinton to Boston has challenged runners since its inception. But what about the course makes it so challenging, and how does it compare to other marathon routes?

Runners of the Boston Marathon are, first and foremost, contending with wildly unpredictable New England weather. Mid-April in Massachusetts can be 80 degrees Fahrenheit and sunny, in the 50s—or cold, rainy and in the 30s. Chris Russell is running his 20th Boston Marathon this year and is the founder of the Run Run Live podcast and the Runnerati blog. The weather is a factor that remains entirely unpredictable, he said, and that can spell trouble for out-of-town racers.

“It really is the unpredictability of the weather. You could get anything on race day, and you really don’t know until maybe the Friday before, because of the way New England weather works,” Russell said. “There’s a Boston Marathon training group on Facebook that’s hilarious because all these first-timers are trying to gauge the weather right now. It’s not even worth trying to do that. You never know. It really comes down to the hour.”

Rolling Hills From Start To Finish

Once the weather question has been factored into the equation, it’s time to turn to the physical challenge of the course. The Boston Marathon traces through unrelenting rolling hills, with a new one seemingly arising each time you crest the one before. Most infamous is Heartbreak Hill, a steep half-mile uphill at mile 20.

While all runners who train for Boston factor this into their program—running hill repeats, timing training runs to hit a hilly portion at the proper mileage, etcetera—it’s near impossible to mimic the conditions and adrenaline of race day. Racers who go out too fast, or simply get fatigued during the marathon, can crash when they face Heartbreak. Despite its relatively short nature, spanning only 200 feet, Heartbreak presents a problem due to its overall position on the course.

“It’s a culmination of a lot of events, especially for people coming in from out of town. If it is their first Boston Marathon, they get so excited, expend so much energy, between the expo, the race, the crowds, the excitement from being where they are, taking the bus out from Boston,” Russell said. “They lose a lot of energy and that comes back to bite them.”

But Heartbreak isn’t the only hill that can give runners serious challenges in Boston. The downhill after Heartbreak is called “Cemetery Mile”—the steep downhill has the potential to shred runners’ quads. And there are actually three hills that arrive on the course just before Heartbreak, after runners round the corner at the Newton, Mass. firehouse, meaning that your legs may already be fatigued by the time you hit the infamous spirit-buster.

Right at the end of the course, just as runners are about to make their final turn, there’s a slight hill from the bottom of Massachusetts Avenue through Hereford Street. On any normal day, this hill wouldn’t pose much of an issue. But on Marathon Monday, it can feel near impossible.

“[For] Boston, there’s so much talk about the big hills, about Heartbreak,” Russell said. “What gets missed is that it’s a New England course. It’s rolling hills. Those are significant hills, but the entire length of it, even the flat section, are up or down hills. There’s only one super flat section around the 10K mark.”

Many areas of the course are also widely open to the elements, without shelter for the runners. A few times throughout Boston, runners are on highway overpasses or main streets in town, entirely exposed to the weather. This is when the unpredictability of New England’s April forecast becomes a serious consideration.

Further compounding the equation is the stretch of course immediately after the start. There’s a large elevation drop over the first few miles after runners exit Hopkinton, including a net change of -130 feet over the first mile alone. Because Boston is so expertly seeded and organized, runners can hit their stride right away, and often fall prey to heading out too fast and hard, buoyed by excitement and nerves, across those first few miles.

“People are full of so much energy that they just bounce down those hills. They don’t know they’re running fast,” Russell said. “It’s not the hills in the end that get you. It’s the downhills in the beginning.”

Technically, the Boston Marathon is considered ineligible for world record status, due to its point-to-point course and negative elevation change. By the time runners reach the finish line, the elevation has changed from 490 feet above sea level to 10 feet above from start to finish. This makes Boston the World Marathon Major course with the greatest elevation change.

While the Tokyo and Chicago marathons are both relatively flat, the course in Chicago is run at the highest elevation: starting at 601 feet above sea level, it ends at an even 600 feet. Berlin drops from 122 to 89 feet; New York from 123 to 60 feet, and London from 150 to 52 feet. Of the American marathons, New York’s course is the most challenging compared to Boston, covering its share of hills between the bridges and the rolling hills of Central Park.

Boston’s constant rolling hills also make it largely unique when compared to other marathon courses. Russell points out that many marathons are mapped today to avoid major hills, as they can be a deterrent to potential participants. But the end of Boston, as the downhills increase, can also be a boon for runners. If you run a smart race, it’s possible to run a fast race at Boston, too.

“If you can pace correctly and you have your legs with you when you crest Heartbreak, it’s a really fast finish,” Russell said. “I have picked up seven minutes in that last 10K.”

Fun Facts About The 2018 Boston Marathon

How To Watch The 2018 Boston Marathon