The elite women's start at the 2018 Boston Marathon. Photo by PhotoRun. 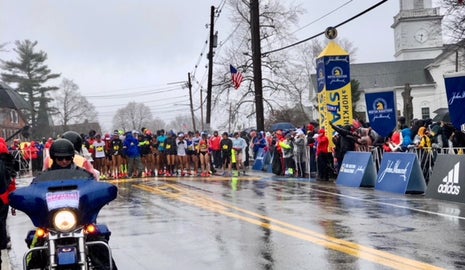 It turns out that the 2018 Boston Marathon was not only a historic event for its harrowing weather and the first win by an American woman in 33 years—it was also one of the biggest charity fundraising years in Boston Marathon history. The Boston Athletic Association announced today that those who ran the 122nd Boston Marathon on April 16, 2018 to support any of the more than 260 non-profit organizations associated with the B.A.A. raised $36.6 million, a 7-percent increase over 2017’s fundraising dollars.

Of the $36.6 million raised, $19.2 million was generated through the B.A.A.’s Official Charity Program (which features 34 organizations, including the Dana-Farber Cancer Institute, Brigham and Women’s Hospital and several local chapters of national organizations) and $13.1 million came in through the John Hancock Non-Profit Program, both of which supplied collaborating charity organizations with a select number of racing bibs for registered charity runners. All additional funds were raised through outside charity organizations.

The B.A.A.’s Official Charity Program and the John Hancock Non-Profit Program have together raised more than $333 million since John Hancock began sponsoring the Boston Marathon in 1985. “Every year it’s gratifying to see the positive impact that the Boston Marathon shares with its surrounding communities,” B.A.A. CEO Tom Grilk said in an official press release. “Many benevolent organizations are helped by these fundraising efforts, and we’re proud to be associated with their good work.”

To learn more about charity fundraising opportunities open to runners through the B.A.A., follow this link.

Editor’s note: This piece originally reported that the B.A.A.’s charity fundraising for the 2018 Boston Marathon set a new event record. The record ($38 million) was actually set in 2014.

Boston: Battle Of The Rain Gear