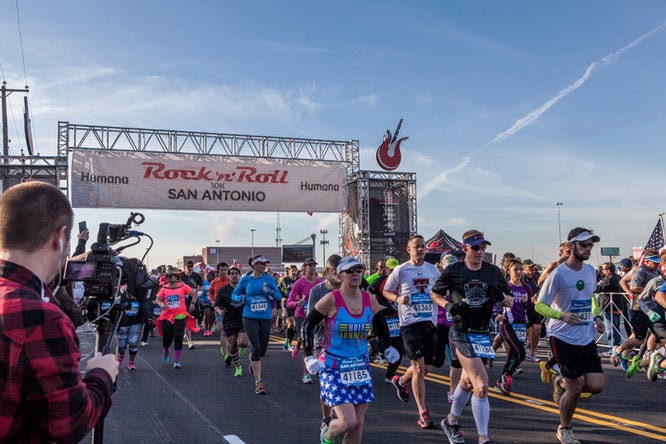 If you’ve ever been one of those runners that’s baffled by others’ behavior before, during or after a race, you’re not alone. Many runners are simply unaware of proper etiquette when it comes to race day. Yes, there are rules to follow (or we suggest you follow), and here they are:

1. Do not cut lines at the bathroom. We know it’s tempting, and we know you really, really have to go. But so do thousands of other runners who are racing the start clock as much as you are. If you’re concerned about missing the gun, opt to find porta potties further from the main entrance of the start area; they tend to have shorter lines. If you have a medical condition that calls for a more urgent bathroom stop, we recommend carrying your medical card to races so others know why you need to get to the front ASAP. (Note: We know many runners water bushes at the start line. We do not endorse this, but if you do it, keep it discreet and NOT in the middle of a crowded corral.)

2. Stop talking during the National Anthem.

3. Start in the correct corral. At many events—Rock ‘n’ Roll races, for example—your corral is based on your predicted finish time. It’s common courtesy to other runners and walkers to start among others of your same pace. If you do want to sneak up to a lower corral number, there are usually spots at the expo to request that change. If you make a race-day decision to do it yourself, kindly start off to the far right and allow those who might have a faster mile pace to pass by!

4. Watch the spitting on the course. Sometimes you take a swig of some unexpectedly bad electrolytes and need to get rid of it quickly. Or you just need to spit. Many runners do this, but it’s best to weave to the side of the course, glance around for runners and/or spectators and aim for an uninhabited area of the sidelines. If it’s windy, triple check behind you before you fire.

5. Pass on the left, stay to the right. If you’re having the best day ever and speeding up, pass runners on the left. If you’re needing to slow down, move to the right to allow others to easily pass. Race starts tend to be crowded for the first mile or so, and sometimes random weaving happens. Always be aware of which side you’re passing and try not to step right in front of another runner as you make your move.

6. Be careful taking mid-race photos. Many runners love documenting their journey, whether it’s at every mile marker, sites along the course or just to show that you’re having the time of your life with your best run bud. We definitely support photos, but please step to the side when taking them. The last thing you want is another runner plowing through you and your phone shattering on the ground.

7. Be conscientious of other runners at water stops. This is a biggie! If you plan on skipping the water, run straight down the middle and don’t crowd sides where others might be grabbing for a cup. If you plan on grabbing a cup and stopping to sip it, wait until you’re fully out of the station zone to move to the side and slow to a walk. Water stops are a hot spot for bottle necking and runners tripping over each other. To minimize congestion, grab quickly and move to the side past those water station volunteers before slowing down.

8. Encourage, don’t discourage. We all have races where we whiz by another runner—and we also all have races where we get passed. If you’re having a particularly awesome day and picking off runners left and right, muster up some energy to say, “Good job!” or “Keep it up!” to them. If you’re leaving it all out there and talking is out of the question, it’s okay to pass in silence. One of our favorite things is a thumbs up to other runners or a quick pat on the back as you go by.

9. Run through the finish line. You did it! You made it to the finish, and one of the most congested areas is after you cross the line. Don’t stop right on the line—there are hundreds of runners coming in hot behind you! Keep moving toward the medals and post-race snacks. If you do require medical assistance, do your best to step to the side and wave down a volunteer who can help you walk and direct you to the medical tent.

10. Don’t shop in the secure zone. Bananas, water, pretzels, gummies—the post-race snack bar, as we like to call it, is full of goodies to get those electrolytes and salt levels back up. We like to follow the rule of one—one of each thing for your post-race tummy. There are a lot of other runners who also want to chow down after running, so be courteous toward them by selecting one banana instead of the entire bushel.