Deena Kastor, Olympic bronze medalist in the marathon and holder of multiple American records, loves quotes. At her four-day Mammoth Running Escape, a California-based camp held last September, she begins each sit-down session with a line she’s been inspired by. It might be something from Josh Waitzkin, the former chess prodigy turned martial artist and writer, or from Shawn Achor, a well-known proponent of positive psychology, or from Antoine de Saint-Exupéry, the author of The Little Prince.

RELATED: 10 Things I Learned At A Running Camp For Adults

“A goal without a plan is just a wish,” Deena tells a group of 10 runners, of diverse ages and speeds, at the beginning of a mind-body clinic. She goes on to share her current goal: breaking the American women’s masters record at the upcoming Chicago Marathon. And it’s clear to everyone in the room, having seen by now how meticulously Deena had organized the camp itself, that she had a plan to achieve it.

Deena and her husband, Andrew, have lived in the mountain town of Mammoth Lakes, Calif., for 15 years. In 2001, a group of elite American runners and coaches—dismayed by our country’s poor showing at the 2000 Sydney Olympics and in recent years in distance events—sought a base for altitude training. They settled on the California mountain town thanks to its high elevation and established an elite training group that could compete against the world’s best.

They succeeded quickly: At the 2004 Olympics in Athens, Deena won a bronze medal in the marathon and teammate Meb Keflezighi took home silver. Since then, the group has evolved into the Mammoth Track Club, of which Deena is the president and Andrew the head coach.

Now Deena is reaching out to non-professional runners by creating a kind of fantasy camp to expose everyday athletes to the rigors of elite training. This includes two-a-day runs, as well as learning the importance of dynamic flexibility and recovery, eating healthy foods and the benefits of positive self-talk. 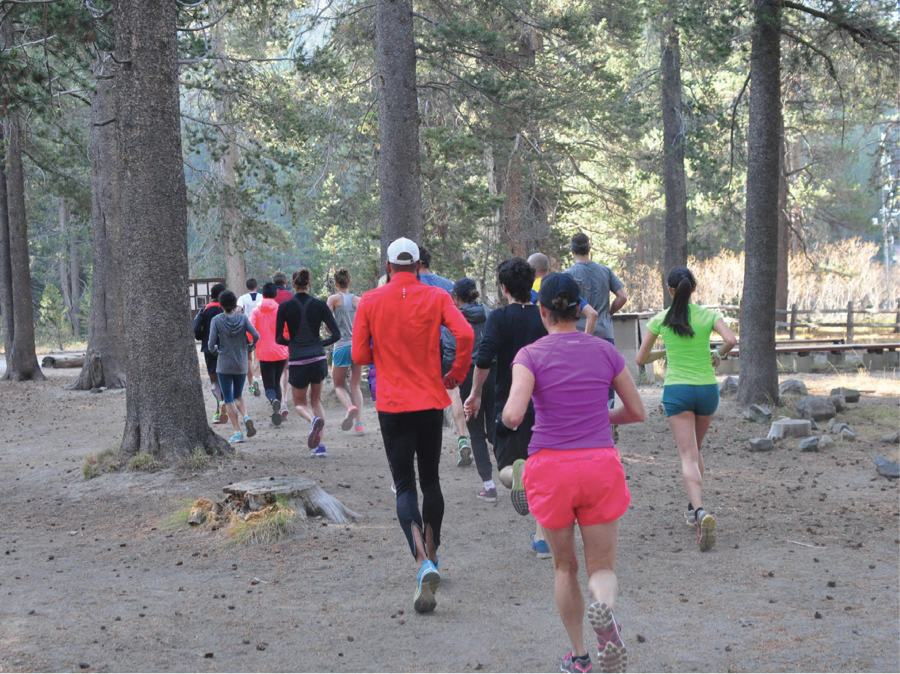 At the inaugural escape in 2015, we even learned how Deena accidentally discovered a reliable method to get rid of a side stitch during a race (hint: laughter is the best medicine). All this occurs in a setting of great natural beauty, a small town of roughly 8,000 people, at roughly 8,000 feet of altitude, nestled in the Eastern Sierras near Yosemite National Park.

Deena can’t see herself living anywhere else, she says one morning over breakfast, describing the “simplicity and focus” living in the mountains allows. She also happens, physiologically speaking, to be a natural wonder. Her VO2 max, a common measure of aerobic capacity, was once measured at over 80 mL/kg/min, one of the highest ever recorded values among women. And even at rest, she has to ascend to 12,000 feet in order for her body to have the same response that most people have at 7,000 feet.

RELATED: A Running Camp For Runners By Runners For Any Runner

Andrew, who is also her coach, attributes this partly to many years of training at altitude. Deena’s body has created super-adapted “plumbing”—which means both more red blood cells and capillaries to transport oxygen to her muscles.

The rest of us in the camp have yet to be so perfectly acclimatized. Lara Bromilow, who lives in London but attended the camp on the tail end of a trip to race in San Francisco (where she lead her team to victory in the J.P. Morgan Corporate Challenge), says that on the first day’s run, up to Mammoth Rock, she was “really wheezing, could barely breathe.”

As all of us struggle at the beginning of the 6-mile loop—except for Deena who springs lightly ahead, darting back and forth to take pictures and tell stories, pointing out the meadow where she and Andrew were married, then the rabbitbrush, sage and manzanita that surround the narrow, winding dirt path.

As the morning chill dissipates and we all settle into a rhythm, it occurs to me that the altitude has not just profound physical, but also intense psychological, effects. By forcing your body to slow down in order to adjust, it also makes your mind more conscious.

Even Deena experiences these psychological challenges on occasion. She describes one particularly tough long run last year. Struggling to finish, she tried to focus her mind on different parts of her body, but that didn’t work. Then she spotted something in the sky. “‘Look up, Deena, holy s—, there’s a bald eagle!’” The majestic sight got her out of her own head, igniting a chain of positive thoughts that allowed her to regain inspiration and finish the run.

Deena reenacted for us the ecstatic inner monologue, at the end of which, she said, she had come to a realization. “I’m not walking away from this. I am forever committed to this sport,” she says. “Whatever your avenue is to growth, this is where I get it.” The culmination of the three-day-long camp is a group 5K on Sunday morning. It sounds simple enough, but there’s a catch: We would start at 9,000 feet, at the Mammoth Mountain Main Lodge, and ascend to the top of the mountain, ending at 11,000 feet. Despite being told that a champagne brunch would be waiting at the summit, many of the campers were apprehensive about the climb. It’s known as the “Ezakimak,” since it’s the reverse of the downhill mountain-biking trail known as “Kamikaze.”

To give some idea of the steepness of the grade, the professional trail runner Tim Tollefson won a race last year up the Ezakimak with a time of 35 minutes— that’s over 11 minutes per mile. The second-place male was 12 minutes behind. The winner of the women’s race? Deena Kastor, in 37 minutes.

Within two or three minutes, I am already breathing heavily and glancing at my watch. If I can keep up with Deena, who’s not in full-on racing mode, I might be able to sneak in a quick one-on-one interview. The plan seems to be working, when all of a sudden she turns around and delivers the same line that she used during a training session featured in the 2007 running documentary “The Spirit of the Marathon”: “Catch me if you can!”

In seconds she has stretched the gap, bounding ahead and scattering flour from a water bottle on the ground to indicate where the rest of us should turn on the trail ahead. Any interview will have to wait.

The only relief on Ezakimak comes when the grade goes from insanely steep to very steep. At times, you’re running so slowly that the temptation to walk seems irresistible. I try to draw on the positive psychology that Deena emphasized earlier in the weekend by focusing on small steps and telling myself how lucky I am to be suffering so intensely.

Strangely, it works. I glance up occasionally to see Deena leading the way to the top, eventually taking a turn onto the final severe grade that ends at a mountaintop café and gondola station. At the top, I find the nearest man-made object, grab onto it and bend over, heaving in exhaustion. Deena, smiling, laughing, exhilarated—and seemingly not even out of breath—congratulates me and then bounds back down the mountain to check and cheer on the rest of the group.

When everyone reaches the top and recovers the power of speech, some reflect on their experience. Bromilow, who’d had such trouble breathing on the first day, says, “I’m just gonna fly in cross country. Cross-country hills are nothing compared to this!” Neil Gottlieb, a 47-year-old from Philadelphia, goes even further. His back had locked up on the climb, but he pushed himself on, telling himself that he “didn’t go backwards.” Looking out from the café at the top of Mammoth Mountain, he continues: “We just climbed to 11,000 feet. I need to keep remembering that, that feeling of pride. I crossed many marathon lines. For some reason, today I felt more pride, just getting through this.”

Deena Kastor’s Best Race and How She Achieved It