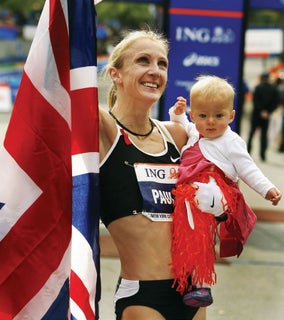 England’s Paula Radcliffe still clenches the world record in the marathon (2:15:25). The storied marathon has won the London Marathon three times (2002, her debut marathon; 2003; and 2005). She won the NYC Marathon three times as well (2004, 2007 and 2008). Radcliffe owns the top-three fastest marathon times of all time. And on Sunday, April 26, the marathoning queen will race her final 26.2 at the London Marathon, where it all started. Before the running world officially sends Radcliffe off into retirement, here are some tidbits about the fastest marathoner around that are worth jotting down:

Radcliffe will certainly retire from running with many miles of impressive marks and moves behind her. The question is: Will she retire with the world record, or will that be broken on Sunday?

These Classic Running Books Were Made for Cold-Weather Reading

10 of the Best Books Written By Olympians