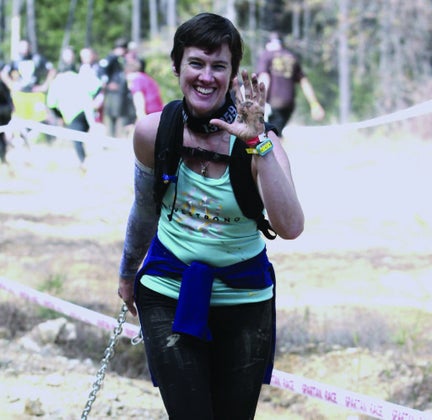 In 2009, I started having some health complications and my doctor recommended a mammogram. While waiting for results, I ran the Marine Corps Marathon. I’d been running for a number of years at that point and didn’t want to let a cancer scare deter me from my goal. It was awesome to complete the race, but I felt terrible throughout. I was so exhausted, I had to walk for many of the miles, mulling over whether or not I had a life-threatening disease.

A few weeks later, I received a positive diagnosis. I had breast cancer. Instead of being terrified, in some ways I felt relieved that I knew what was going on with my body.

For 10 months the treatments consumed my life. During that time, I would run across the Sky Bridge at the MD Anderson Hospital in Houston. Even just 15 minutes of exercise felt like a major accomplishment. The cancer treatments were taxing, and I needed something to revive me. For me, running kept my spirit alive during and after surgery, chemotherapy and radiation.

Finally, my treatments came to a close in September of 2010. But with this disease, you have to find a new normal. Even after they removed the breast cancer, I was left with lymphedema, a condition that made my limbs swell abnormally. I decided that I wouldn’t let this side effect prevent me from getting back into racing shape.

I went back to the same race, the Marine Corps Marathon, a month after my treatments. This time, I ran to raise money for the American Cancer Society and prove to myself that I was back. Crossing the finish line, I was overcome with a profound sense of gratitude that I was still able to get out there, to breathe, to move.

MY BEST ADVICE: STAY AWARE AND RUN ON.

As many as 56 percent of women who undergo breast cancer surgery develop lymphedema within two years post-surgery—and the risk can remain for 30 more years. It’s important to know these stats but never to let them get in the way of your goals. I was able to keep running by wearing compression sleeves. My favorites are trendy printed ones from LympheDivas!