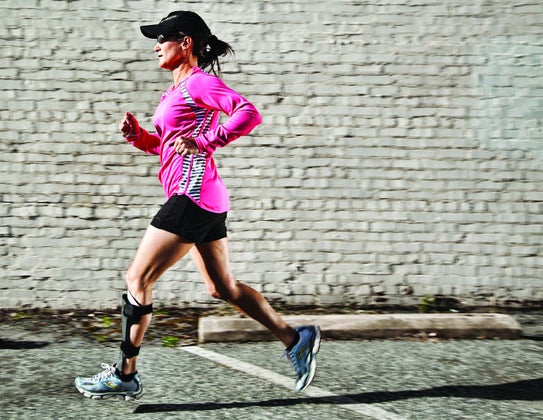 Growing up, my back would hurt from time to time, but I never gave it much thought. It didn’t affect my life too much, so I just chalked it up to having a “bad back.”

In my 30s, I was completely hooked on marathons. In my first 26.2-mile race ever, I qualified for Boston, and I continued to return to the race year after year. However, after the 2004 Boston Marathon, my back pain started to worsen. One day, it was so severe that I passed out on my kitchen floor. My friend had to break into my house to get me to the hospital.

The trip to the emergency room turned into a nine-hour surgery to repair previously undiscovered birth defects. Two of my discs had ruptured and, worst of all, a vertebra had collapsed, damaging the nerve controlling my left shin and ankle. I woke up with rods, plates and a paralyzed left leg.

I had gone from a marathon runner to a person who could barely walk. My first step toward getting better was healing my spine. Then I started trying different leg braces. About eight months later, I was walking when a group of runners breezed passed me. The realization that I no longer could self-identify as a runner hit me as I watched them go. I started to feel depressed but became determined to run another marathon one day.

Two years after surgery I found a lightweight brace with a spring-like response called ToeOff. I cried when I tried it on because I knew that it would work.

In October 2006, I was once again standing at a marathon start line. I finished that day, qualifying for Boston. With the help of my friends, family, leg brace and spirit, I know that I am a runner who can overcome anything.

MY BEST ADVICE: FALL SEVEN TIMES, BUT GET UP EIGHT.

No matter where you are, focus on getting back up. You will never make it through the finish line if you can’t get back to the starting line.