I’ve been called crazy for running every day. And who knows? With my running streak hitting 32 years this December, people could be right.

But the thing is, there are others like me—62, in fact, who are listed on the United States Running Streak Association registry as running every day for 30 years or more. Within this exclusive club there is an even more elite group: women. Only four of us, including myself, have reached this three decade milestone. The next female “streaker” will reach the quarter century mark in about a year, and then there is a two-year gap until the next woman does the same thing.

Why so few women, and why run every day, anyway? The answers reflect a stark change in the way women in athletics were viewed not long ago, and the differences between why people ran then, and why they do now.

I have the third-longest streak for women in the U.S., with a streak defined as running at least one mile within each calendar day. Lois Bastien of Florida, who is 79, has run everyday for 36.5 years, while 75-year-old Barbara Latta of North Carolina will notch 33 years in December. Virginia resident Judy Mick, 58, will tally 31 years in November. I am the baby of the bunch at 49 years old, having begun my running streak as a 17-year-old, while a senior in high school.

Latta, Mick and myself all had different paths in our unique running journey.

RELATED: Coaches Weigh In: Should You Do A Running Streak? 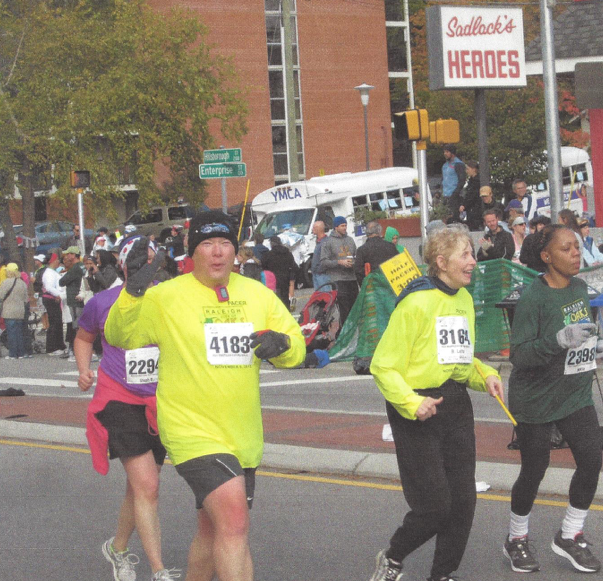 In the 1970’s, not long after Kathrine Switzer’s famous appearance as the first woman in the Boston Marathon, Latta was a young elementary school librarian. The principal of the school was a good marathon runner himself, and saw Latta out walking one day. He later told her she should run instead. She decided to try it. And it ended up being a solo sojourn.

“One day after school I proposed to my sons that we should go for a run, and neither of them thought that was a good idea,” Latta said. “So I went by myself, and I ran 1.5 miles. I told the principal the next day and he said, ‘That’s good—run every day, don’t stop. If you miss a day, then you won’t go back.'”

He kept checking on her, encouraging her to run on weekends, too. After a few weeks, he was satisfied Latta had formed a habit. He had no idea just how much.

Latta’s brother bought her first pair of running shoes, which she “wore until they disintegrated.” Next, she got a pair of New Balance running shoes, and her favorite routes became the mountain and woody areas near her home.

Still, it was over a decade later that she realized she had a running streak going, after reading about fellow streaker John Sutherland in the Wall Street Journal.

“I got in the habit of running, and I was up and out the door before I’d had a chance to think about it,” Latta explained. “I majored in library science and always had a methodical, structured way of doing things.”

Latta said women’s late start in athletics is why there are far fewer of us on top of the running streak list. When she first began running, children would point to her and say to their mothers, “Look, that woman is running.”

“Running was not popular for females. It was a male-dominated sport, which most sports are in the beginning,” Latta said. “Even now, after so many years, they are forming a football team for women. We are the last to be allowed to do most sports.” 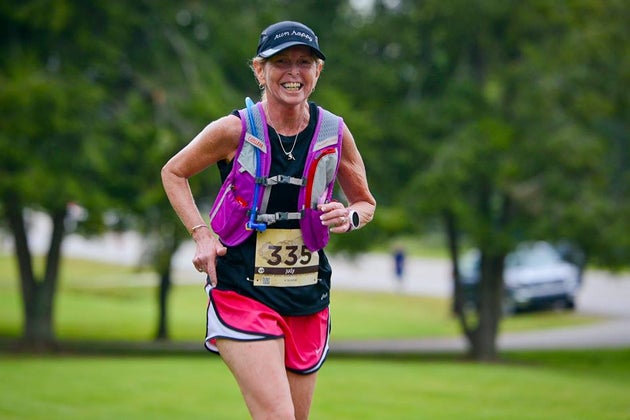 Mick, from Lewisberg, West Virginia, originally began running to catch the eye of a cross country runner she fancied. But she found that her love of the sport lasted longer than her interest in the young man.

She moved to Roanoke, Virginia 30 years ago and began running with a few friends from college. One day they decided to see how many days in a row they could run. Mick’s friends eventually stopped, but she didn’t. She loved the exhilarating feeling of blazing down open roads, and it sucked her in completely.

“Though running consecutive days was our intention, it wasn’t until I hit the one year mark that I realized I’d been doing it for that long,” Mick said. “I never thought, ‘I have to go run.’ I just went out and did it.”

For the first decade, Mick ran a lot of mileage. She has cut it back a bit as she’s become older, but still runs half marathons at least once a year.

“My husband and I own a business, and running is a great stress reliever,” Mick said. “Not to mention the sights. Many a time we’ve driven back to a road after I’ve told him, ‘let me show you what I saw on my run.'”

Like Latta, Mick hypothesized that the reason longtime female streakers are a rarity is due to lack of opportunity years ago.

“I’m sure for some women, their families were not supportive,” she said. “Especially since you didn’t see many women on the roads.” 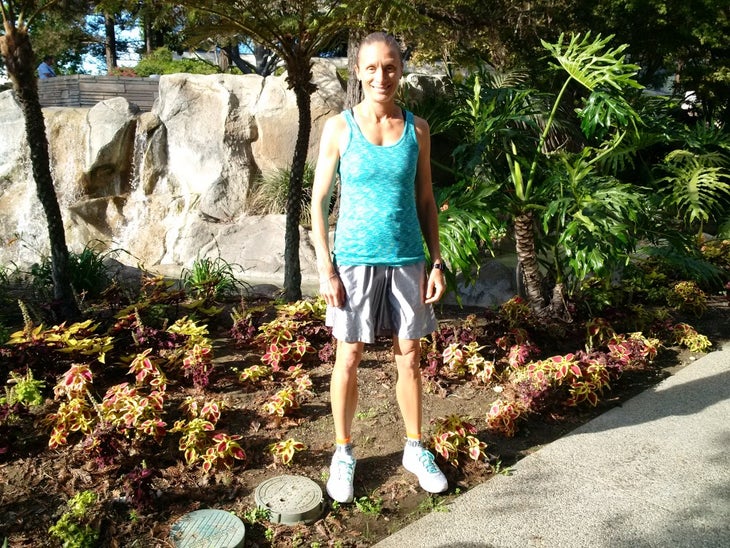 My own background, while atypical, was ideal for creating a runner. I was raised in Eugene, Oregon—the cradle of track and field. Mary Decker Slaney and Alberto Salazar were among the elite runners who lived in town, and when I became a runner myself at age 14, I’d see them out training. Sometimes they would fly past me if they were coming from behind.

I stopped running for a time in high school. But the summer before my senior year, I entered a challenging period in my life where I was really struggling. In desperation for an antidote to severe stress, I turned to an old friend and went for a 1.5-mile run one dark night a few days before Christmas. The relief was immediate, and I clung to it like a lifeline.

It wasn’t until a road race the following June that it dawned on me I had been running every day since December. But even then, I didn’t feel any pressure to continue, nor did I think about having a streak again until a few years later. Running had not just become a part of my day; it had become a part of my heartbeat. Living in an insulated world of running and track and field, it was easy to continue my daily practice, as other runners were everywhere.

One of the greatest gifts of my earlier running years was getting to hoof it everywhere. Traveling across the country, I ran in city after city (I have run in 122 cities in North America). I have seen the United States up close and personal, as can only be experienced on a run. Living in Seattle as a young adult, I ran twice a day for a time. Then cutting it to one epic run, I would go up and down the city’s mighty hills, traveling through neighborhood after neighborhood like the Road Runner. I still think about my “flying” runs during that time.

RELATED: To Streak Or Not To Streak (That’s A Real Question)

My fellow 30-plus-years women and myself have other differences. Latta, like Mick, runs half marathons and other longer road races; I don’t. I am content to simply run every morning near my house.

Latta and Mick report no major illnesses over the last three decades to kept them from running. I had pneumonia in 2008, and purposefully kept my streak alive by piecing together a mile run in bursts. I also have some tendinitis in my right knee that keeps me from running the long distances that I used to tackle.

Yet, the similarities between the three of us outweigh our differences.

We all run first thing in the morning, and each feel strongly that this is the key to maintaining a practice. We also see our runs as “me time.”

Mick and I run in the 5 a.m. hour as well. Mick said that discipline is what separates us from less serious runners.

“We have a commitment level that is different,” Mick said. “Running isn’t just something that I do; it’s part of who I am now.”

Mick’s husband Bob knows she will go running on vacation, and is supportive of a practice that he sees benefits her. Similarly, all my family and friends know that my day always begins with a run, no matter where I am.

I have come to terms with needing to be more mindful with aging, which includes stretching daily and running on soft surfaces. Mick has made adjustments, too.

“Sometimes it gets discouraging because I’m a lot slower than I used to be, but I can’t name even three people that I used to run with who are still running,” she said.

There has been a surge of interest in streak running over the last decade, and the USRSA active streak list has now swelled to over 500 members. Many of them post daily on social media, logging their days and seeking support. That is a trend that Latta, Mick and I don’t understand, as we have never counted out days running, and don’t wish for support to continue.

“I have never thought that I had to run—I just went and did it,” Mick said. “It’s second nature to me.”

Similarly, I have never considered my running to be anything special, as it is just a part of my morning routine, like rising and having breakfast. It wasn’t until a new running streak friend of mine suggested I talk to other long-time female streakers that I thought about contacting them.

For us in the three decade club, the run is the reward in itself.

“My runs have been beautiful of late,” Latta said. “This year I have seen a lot of deer and fawns, and I love that. Also, ducks and geese.”