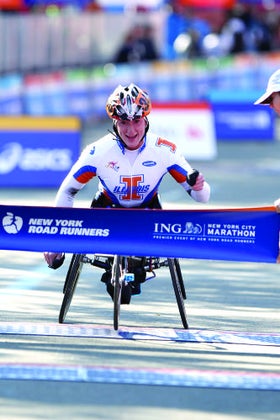 I was the first person ever to win four major marathons in one year, making me the only Grand Slam Marathon Champion.

Even though I entered this world with spina bifidae, a disease that paralyzes me from the waist down, I knew I was born to run. Since my birth mother didn’t have the resources in Russia for my medical treatments, she was forced to leave me in an orphanage at the age of 6. My mom, then a commissioner of disabilities for the U.S. Health Department, found me walking on my hands in that orphanage.

Doctors warned her that I may not live, but she knew she had to give me a fighting chance. My mom brought me home, helped me get healthy and had me fitted for a wheelchair. Immediately, I loved the freedom the chair gave me. I wanted to go faster and faster, which eventually led to racing.

After capturing wins at London and Boston, I entered Chicago with a dislocated rib. I fought through the pain and sprinted to the win, capturing a course record and setting myself up to go for the illusive Grand Slam.

I woke up the morning of the New York City Marathon with a belly full of nerves. I went out fast, hitting inclines hard and powering through when my muscles started to scream. Seeing my family during the last stretch made crossing the finish line in first place one of the proudest moments of my life.

Since winning the Grand Slam Marathon title, people see me as a champion, but I believe when you peel back the layers, you’ll see me for my character. I’m a determined woman, hoping to push Paralympic sports and make running something anyone (able-bodied or otherwise) can do.

I learned to be clear with my goals. When I won the Grand Slam, I was finishing my senior year of college, and balancing my responsibilities was tough. Each day was filled with continuous training and studying. Being honest about my academic and athletic goals allowed my family, teachers and coaches to support me in their respective ways. Share your goals with the people in your life so that they can help you achieve your dreams!

FUN FACT: Tatyana is also an Olympic silver medalist in cross-country skiing. Is there anything she can’t do?!