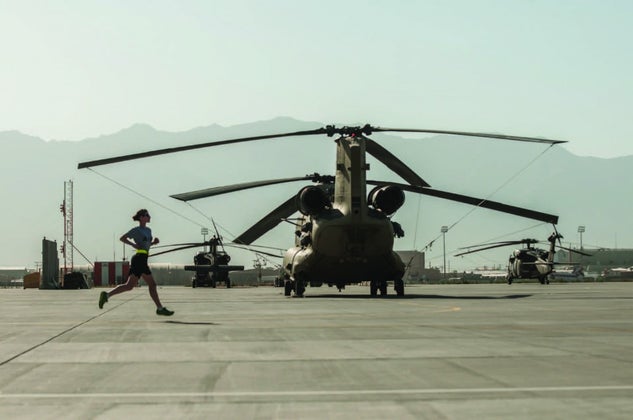 I was the first female finisher of the 2014 Boston Marathon Shadow Run in Afghanistan.

Last year, I qualified to run the Boston Marathon—a dream come true for me. But soon after, I learned that, as a military intelligence officer, I would be deploying to Afghanistan. My goal of lining up at the start line in Hopkinton would have to be put on hold.

As it turned out, I wasn’t alone. Army chaplain Captain Luke Willenberg had finished the marathon in 2013 before the bombings. After qualifying for the 2014 race, like me, he was deployed to Bagram Airfield. Determined to remember the victims of the Boston bombings, Willenberg contacted the Boston Athletic Association to pitch his idea of coordinating a shadow run on base in Afghanistan.

The organizers loved the idea and even sent official finisher medals and trophies for participants. Through word-of-mouth alone, the race quickly grew to more than 600 participants.

Since safety was crucial, details surrounding the race were kept top-secret until a few days before. When I lined up for the 3:00 a.m. start, I was amazed by the turnout of runners and volunteers. And as I looked around, I was inspired by the shared desire to stand strong in the face of terrorism.

I started the race with the simple goal to finish. With the stressful days and long nights on deployment, training had been sporadic. I concentrated on keeping an even pace, tackling the race one mile at a time.

When I passed the first female, I remember thinking to myself, Won’t it be cool to tell the story about how I lead the marathon for a few miles? With helicopters flying overhead to keep a close eye on the course, I reached mile 25 and finally let myself believe I would actually be able to win. Crossing the finish line with a time of 3 hours, 12 minutes, I took the first female spot and collected the Boston Marathon medal I had dreamed of hanging around my neck.

After the awards ceremony, I celebrated with fancy coffee, bought by a soldier on my team, and returned to work for a 16-hour shift. Being part of the beautiful parallel of running the Boston Marathon in a war zone was an honor I’ll never forget.

I learned the importance of surrounding myself with supportive women. Whether they run with you or cheer from the sidelines, it’s empowering to have women around to celebrate your journey. It’s also important to reward yourself. Being de-ployed means sacrificing some of the girly things I love. I plan to celebrate my win when I return home with a pair of high heels and earrings!