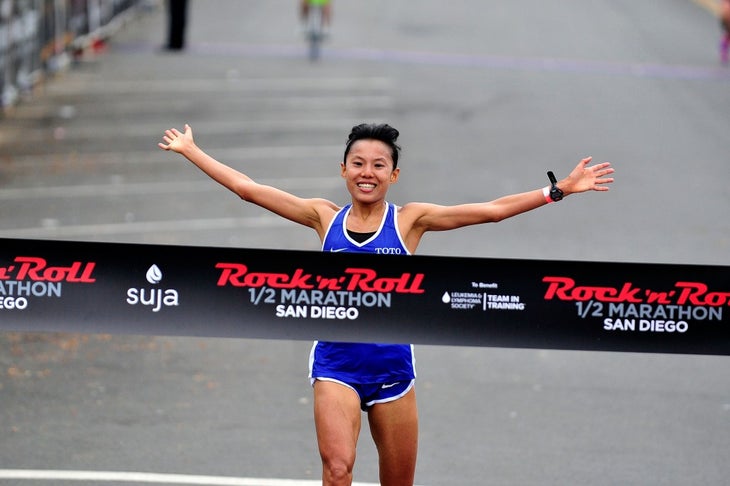 Because your favorite race series is offering some monster savings!

On Wednesday, Dec. 16, world-famous Rock ‘n’ Roll Marathon Series dropped some serious loot from Santa Claus in the form of race savings, with registration prices as low as $45 for half and full marathons. According to their website, these are the lowest prices of the year, which means they are even better than a little thing called National Running Day. Translation: This one-day, blow-out sale is kind of a big deal.

Rock and run with us! Register with the lowest prices of the year on 12/16!

The best part (other than saving a good chunk of change) is that our editors have participated in a good majority of these Rock ‘n’ Roll events, and we have some favorites to share with you:

I went to Rock ‘n’ Roll New Orleans with a girlfriend and had: The. Best. Time. The gorgeous course is as flat as the sandwich meat in a muffaletta, and the morning I ran, it was cloaked in a thick fog that lent an air mystery that felt distinctly “Deep South.” I can’t imagine a better place than Nola to refuel. Between po’ boys, king cake, oysters, jambalaya, sazeracs, gumbo and beignets from Café Du Mond, the opportunities for a post-race gorge-fest are limitless. —Jessie Sebor

I love the Suja Rock ‘n’ Roll San Diego Half Marathon, because it goes through the neighborhoods where my friends and I have lived, so everything is familiar along the way and I can reminisce about a spicy Asian dinner or a birthday party at a brewery or even getting my hair and nails done! There’s one area where the residents sit outside like it’s a parade going by. The energy is amazing! —Nicki Miller

Few might think of San Antonio when they think of a crazy good time in Texas, but after experiencing the Humana Rock ‘n’ Roll San Antonio weekend and running the 10K, I caught a glimpse of why that town is special enough to host such a great event. The Riverwalk is a given—lined with fun restaurants, hotels and, in December, Christmas lights, the walk is impossible not to obsess over. When you’re not winding the walkways along the river, the sounds of live music and smells of hefty Texan BBQ make dinner a delicious no-brainer. While the locals pointed out the “lack of healthy food options,” there’s definitely a burgeoning scene of organic juice bars and gluten-free alternatives at trendy coffee shops. And the race? The spectators are unbeatable, and the twists and turns through all sorts of neighborhoods keep it interesting the entire way. —Caitlyn Pilkington

Why this 10K rocks your world: Why One Race Changed My Perception