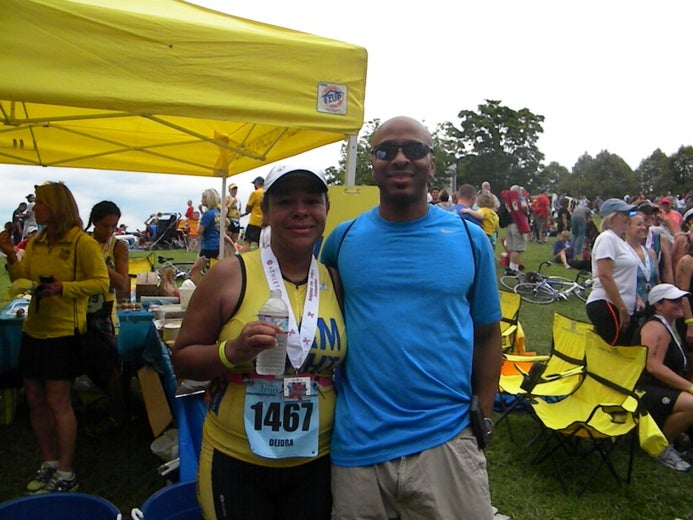 U.S. Army Veteran Deidra Jules knows how to take things to the finish line. She started running after she joined the military in 1989 as a way to finish her education; now the mother of 17-year-old twins is attending a Doctorate of Science program while training for a half marathon. She talked to Women’s Running about how her relationship with running grew with her military career, the way running has shaped both her health and her bucket list, and what Veteran’s Day means to her.

Women’s Running: Did you have a running background before joining the military?

Deidra Jules: Growing up in high school, track was a big thing for me but I didn’t take it too far. I didn’t have many people around me to help me see the importance of things like how exercise should be a daily habit that keeps you healthy. It wasn’t until I joined the military that it became a part of my life.

I didn’t do any running prior to joining the military, so that was new to me. That was rough at first, it’s a situation where they break you down to nothing, so it was hard for me, terrifying, a lot of crying. But that’s the idea, they’re trying to break you down and build you back up so you’re disciplined and eventually lead on your own. The running is part of the discipline; it’s a big morale thing, we run in formations and it’s part of your life, part of your daily operations.

The running was the best part for me—it was the push-ups and sit-ups that I didn’t want to do! I always did aerobics so I had endurance, so when I was doing the runs my first sergeant would always have me be the road guard, because when you’re the road guard you’re stopping traffic and always doing a lot of back and forth running to catch up so you needed people with the endurance to keep up.

WR: How did your relationship with running change after your service?

DJ: I retired in 2009 and had a rough last year. It’s still hard being a woman in the military; every unit I was in, it was usually me and another female and everybody else were men so it’s a big competition, like “Oh, they can’t keep up,” so I always pushed myself harder to make sure I was there with them. So when the time came to retire I just wanted to relax. Well, the year went by and I realized how much it was a part of my life. So I started running again. I also started getting high blood pressure during my last few years in the military, and I realize that running has helped me with that battle. I knew that I would probably never be off the medicine but the cardio and eating right was going to be to my benefit.  So when I started to run again I made myself make goals. I did the Iron Girl triathlon, I did the Iron Girl half marathon. I just kept doing things to keep myself going. Then my friend told me about the Rock ‘n’ Roll half marathon in D.C. next year so I was like, “Let’s do it!”

DJ: Twice a week I do weight training, and the running I try to do two to three times a week, but that’s going to ramp up soon because I’m doing a 26-week program for the half marathon next year. It’s really a mind thing for me, if I stop it’s hard to get back in the routine and it’s a constant battle for me to keep my mind motivated, which I’m sure is the same for a lot of people!

WR: What significance does Veteran’s Day hold for you?

DJ: It’s a very important day for me because I lost a few friends. That day for me…I’m a veteran but I don’t celebrate that for me, the celebration is for those that have died doing their patriotic service and those that are still out there with their lives in danger.  I’ll just deal the best I can and keep going; there’s a reason why I’m still here and I’ll just keep marking off the things on my bucket list.