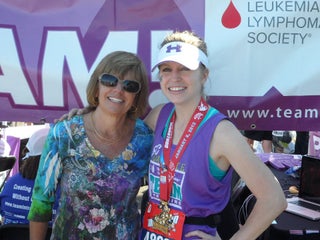 My favorite running buddy almost never runs with me. She usually rides a bike. It’s not that my mom can’t run; it’s more that she’s picky about the conditions—temperatures between 60-70 degrees, no hills, and three miles or less. Therefore, we don’t actually run together very often, especially when I’m training for marathons. My parents split their time between where I grew up in Florida and their home in North Carolina, which is about 2 hours away from where I live now, and I’m lucky to see them pretty often. My husband and I recently bought a new house and my parents have visited frequently, helping us fix it up. It just so happens that they come visit on the weekends. It also so happens that I’ve got two fall marathons that I’m currently training for.

Partially because my dad and my husband wake up late anyway and partially because my mom loves spending time with me, she has accompanied me on many of my long runs this season. I normally run by myself these days, having recently moved to a new city, so I always appreciate the company. Like most mother/daughter pairs, though, my mother and I have not always had an easy relationship. It’s been easy at times to fixate on our differences rather than our similarities and, having no children of my own, I can’t say I understand what it is like to be a parent. Spending hours and miles together—me on foot, her on my road bike, toting all my water, Gatorade, and energy chews—has helped me put into perspective and reframe our relationship in the context of adulthood, in a way that I hadn’t really before. I thought about that on my long run this weekend—my first one without her in quite a while.

It was kind of weird not having her bike along next to me, and to be honest, not nearly as much fun. My mom is my biggest running fan. She willingly wakes up very early to ride a bike next to me up and down hills at a mind-numbingly slow pace. She hands me my water and Gatorade, holds my energy chews, and tells me all the family gossip. But even more than the entertainment value and the fact that I don’t have to carry my own stuff, she is endlessly supportive of my running and proud of me no matter how bad I might look or feel. More than once on my long runs with her, I’ve felt like I’m crawling along and am having an awful run. “Wow, I can’t believe you’ve been running for three hours! You look awesome!” she says, and I know she means it. Your mom always means it, right?

Running with my mom has helped me to appreciate her and all that she does for me in a whole new light. I love all my running buddies, but there is something special about having my mom right there next to me, pushing me just a little bit further. Thanks for the miles, mom!