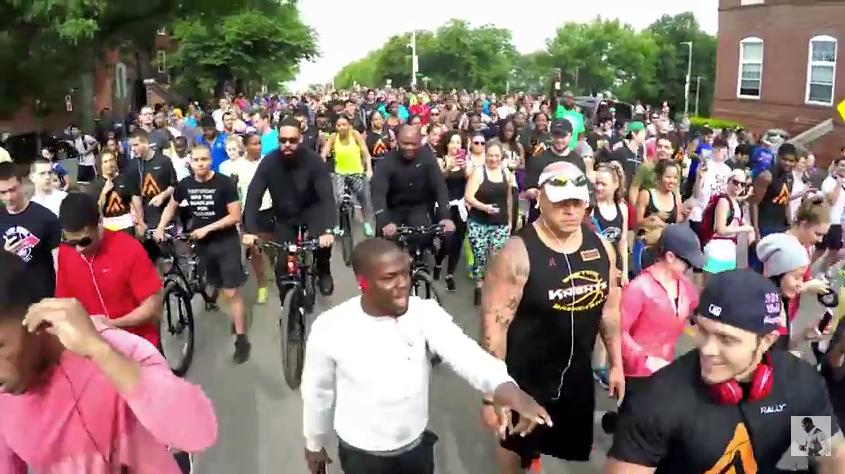 According to the comedian’s Instagram, “Mark my words…These 5K runs will continue to grow and get bigger. My goal is to create a lifestyle/mindset that every all over the GLOBE can relate to and achieve.”

What started as one surprise run, organized through social media in Boston last month, moving to Piedmont Park in Atlanta later in the month, is quickly gaining momentum as the biggest “popup race series” ever. Part of his partnership as an ambassador with Rally Health, the runs are meant to inspire Hart’s fans to get out there and move. Hart, known for his stand-up comedy and hilarious movie roles, partnered with Nike Run Club for his last 3.1-miler through Prospect Park in Brooklyn over the weekend. The series follows areas of the country where Hart spent time previously filming upcoming movies. The runs, which Hart documents via Periscope on Twitter, also seem to be following his WHAT NOW? Tour locations, which is scheduled to hit Northern California this weekend.

The 5’4” funny man told People.com that he’s “not a big runner, but I try to make sure I put some time in on that mill. I run anywhere from 2 to 3 miles a day.” However, the dude gets his sweat in with 60-90-minute weight workouts every day, so we wouldn’t underestimate his strength.

If you’re itching to join the moving movement with Hart, we say follow him on Twitter to see what city he’s hitting next with a spontaneous 5K.

Is There A Reason For All The Extensive Marathon Preparation?

The Perks Of Parkrun