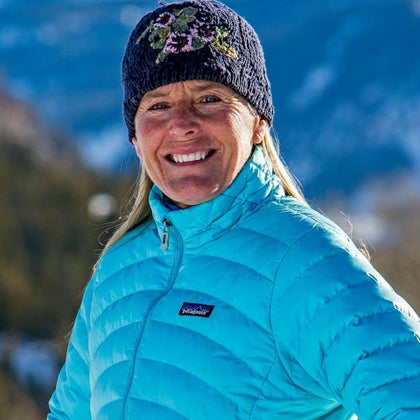 My name is Lisa Smith-Batchen.  I am 55-years-old. I am married and have two beautiful adopted daughters. Endurance sports are my gift, and running is my passion. Starting on April 24, 2016, I will run 3,100 miles across America and attempt to break the 36-year-old transcontinental speed record of 46 days. I am raising money for the Tyler Robinson Foundation, which supports families financially and emotionally as they cope with the tragedy of pediatric cancer diagnoses.

Every person is good at something. Some people are good at athletics. Others are talented musicians, writers or artists.  Some people are good at math and science. Your gift can be as simple as being able to get along well with others.  Some people are good at running, a simple activity that puts one foot in front of the other. The biomechanics of running are pure instinct—they are built solidly into our collective biological makeup. Our bodies know how to run because running is part of our nature as human beings. Children at play are excellent runners, and they take their cue from millions of years of evolutionary history.

If you have a gift, you owe it to yourself to honor that gift and hone it, but that takes work. Often times in life, we find excuses to stop us from putting in the work and sharpening our skills and talents, and we take our gifts for granted. People like Hillary inspire and move us because they have not given themselves an out: they have pursued their passions despite the overwhelming obstacles. What, then, can our excuse be for not honoring the best and most sacred part of ourselves: our power and capacity for greatness?

Why Run Across America?

One of the great feats of the modern running movement is the transcontinental run. In 1980, a man named Frank Giannino, Jr., ran 3,100 miles from San Francisco to New York in 46 days, 8 hours, 36 minutes. In doing so, he set a record for the fastest run across the United States. His record has not been broken.