Who Runs the World? Girls, of course!

Seven women runners from all corners of the globe dish about their favorite sport. From Canada to Kenya, we’re not as different as you might think. Could running be the answer to world peace? 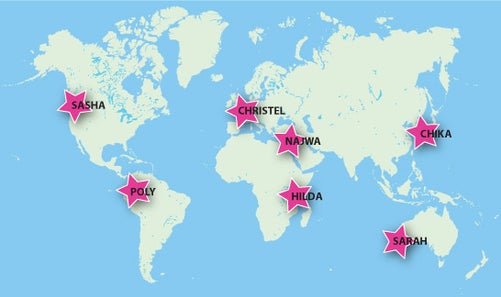 Christel Jaarsma, 28
Hometown: Utrecht, The Netherlands
Career: Lawyer
Distance logged per week: 50 to 60 miles
Favorite shoe? Asics GT-2160 for long runs, Newtons for speed work and Salomon Speedcross for the trail.
Running partners? My two beautiful dogs, King and Hitch. There’s also an active long-distance running community in The Netherlands which travels the country to train together.
Ideal running route? The Swiss Alps. I’ll hop in my car and take the eight-hour drive to the mountains every chance I get.
Post-race ritual? Meeting up with running buddies and consuming any greasy food I can get my hands on, washed down with a large pint of beer.
Must-have apparel? Moeben running skirts, arm sleeves, compression socks, a Salomon Slab Backpack and a Canicross Running Belt for my dogs.
Favorite fuel? GU Energy Brew and Gel. During ultramarathon training, I like cheese and peanut butter sandwiches—and lots of Coca-Cola.

When the law firm Christel Jaarsma worked for sponsored a 10k in the fall of 2009, she thought she should participate—but didn’t bother to train. “I figured, I’m young, I can do this,” she says. “It was awful. I think I died two or three times out there.”
Nevertheless, Christel’s curiosity was piqued. She set a goal of running the New York Marathon in 2010 and immediately started increasing her mileage. Since then, Christel has started a running blog (sillygirlrunning.blogspot.com), run five marathons and finished a 50-mile ultra. She’s currently planning to run a 100k race up Mount Blanc next year. “I didn’t follow the normal progression of 5k, 10k, half marathon then marathon,” says Christel. “People keep telling me I’m insane. But I’m enjoying myself.”

Growing up with a physical education teacher for a mother, Sasha Myers Demong has been interested in fitness all her life. She loves the active outdoor lifestyle in British Columbia where she lives. In addition to running, she mixes swimming and biking into her training and competes in adventure races and triathlons.
Sasha got serious about running when she started working at Innovative Fitness, a gym that offers destination-training programs targeted toward a race in an exotic location. After running the Honolulu Marathon in 2007, she was sold on the concept. “I pick big events in places I really want to see because then I feel like I can’t back out of the race. I encourage my clients to do the same,” she says.

Sarah O’Sullivan, 31
Hometown: East Fremantle, Australia
Career: Genetic Counseling
Distance logged per week: 40 kilometers (24 miles)
Favorite shoe? Asics Gel Kayano 16.
Must-have apparel? My standard uniform is a bright pink Lululemon scoop-neck tank with black cropped pants.
Ideal running route? I’m lucky to live near a beautiful river in one direction and a gorgeous beach in the other. I love to run in both locations.
Can’t leave home without? My Garmin watch.
Go-to cross-training? Free weights at the gym, swimming and cycling.
Favorite race? The Perth City to Surf Half Marathon for its great atmosphere and killer hills. I also love to watch the New York City Marathon on television and hope to run it one day.

Sarah O’Sullivan hadn’t run since childhood when she decided to start jogging while taking a walk along the beach. “I’m still not sure what inspired me,” she says. “But now I love running and can’t imagine life without it.” Sarah entered her first race at a friend’s suggestion and continues to compete in a few 10k races and half marathons each year. When Sarah is not on her weekly run with her three close girlfriends, she likes to train with a group that meets at a local Lululemon store.
After reading Born to Run, Sarah is getting ready to jump onto the barefoot bandwagon and recently purchased her first pair of Vibram FiveFingers. “I’ve had a couple of stress fractures in my foot that according to my podiatrist could benefit from this approach. I’m easing my way into them,” she says.

Poly Martínez, 47
Hometown: Bogota, Columbia
Career: Strategic Communications Advisor and Journalist
Distance logged per week: 64 kilometers (38 miles)
Favorite shoe brand? Saucony for the road, Salomon for the trail.
Favorite fuel? I drink a cup of coffee with a dash of milk and eat a small bite of fruit before I run. For long runs, I’ll bring along an energy gel.
Ideal running route? I like to run outdoors and do most of my running on city streets and local parks.
Upcoming race? The Chicago Marathon.
Post-race ritual? I go to brunch with my sons, Pedro and Lorenzo, and my parents and friends. Sometimes I take a swim to relax my muscles.
Go-to cross-training? Spinning classes, swimming and yoga. Twice a week I do Pilates as well. I also lift weights, but I don’t like it very much.

Poly had her eldest son in mind when she started running. She wanted to teach him that challenging yourself was important, so she signed up for a local Nike 10k after seeing an advertisement in the Sunday paper. Not only did Poly finish the race, she crossed the line with a faster time than expected. “I discovered how great it feels to run, both for the body and the mind,” she says. “From then on, I was hooked.”
Now Poly trains with a coach and belongs to a team of more than 70 members. While running for fitness has been on the radar in Colombia for a while, Poly says serious training and racing (like she does with her team) is a new trend.

Hilda Ogada, 32
Hometown: Nairobi, Kenya
Career: Marketing
Time logged per week: 3 hours
Favorite shoe brand? New Balance.
Post-race ritual? I go for a whole body massage to relax my tense muscles.
Must-have apparel? My tracksuit. I need it to keep warm because I run in the evening when the temperature drops.
Running partners? My colleagues from work.
Ideal running route? The city streets are crowded, so I prefer to go to the parks in Nairobi where there are trails and big sections of grassy fields to run through.
Go-to cross-training? Hiking, biking and stretching.

Hilda took up running in her late 20s to stay fit. She picked running as her workout of choice because of its reputation for building strength and endurance, but more importantly, she explains, “because it’s fun!”
For the past three years Hilda has participated in the Standard Chartered Nairobi Marathon’s Run for Sight, a race held every fall to raise funds and awareness for cataracts, glaucoma and other eye diseases in Africa. She’s raced both the 10k and the 21k distances in different years. “I’m not in it to win it,” she says. “I just love the idea of doing something good for others through my running.”

Najwa Kandil, 27
Hometown: Amman, Jordan
Career: Advertising
Distance logged per week: 20 kilometers (12 miles)
Favorite shoe? Nike LunarGlide.
Ideal running route? I like the quiet roads in my neighborhood. While I prefer outdoor runs, I log a lot of miles on the treadmill due to weather or time constraints.
Go-to cross-training? Strength and circuit training at the gym.
Favorite race? The LG Dead Sea Half Marathon in Jordan. It’s a good distance to challenge myself, and the race finishes at the lowest point on earth!
Post-race ritual? The shower afterwards is just unbelievable, and of course going for a meal with family and friends.
Favorite fuel? I eat a lot of nuts, cashews specifically. If I go for a long run, I’ll usually make myself a smoothie afterwards with fruit, yogurt and honey.

Born in Egypt, Najwa Kandil moved to Jordan as a child. She has now lived in the country for 20 years but attended university abroad. Najwa was studying in the United States when she first took up running. Her roommate was training for a 15k race and invited Najwa to come along on a short run. “I liked it so much, I decided to train for a 5k at the same event,” she remembers.
At the race-day registration table, Najwa panicked over running alone and signed up for the full 15k with her roommate instead. “It was tough—but I finished. The sense of accomplishment that I got was enough to keep me running,” she says.

Chika Kanai grew up in Japan but started running while studying at the University of British Columbia. One day, after her Aikido practice, she noticed a flyer for the Vancouver Sun 10k. Chika and her roommate signed up for the race, and she immediately fell in love with running.
After finishing school and moving back to Japan, Chika joined the
Namban Rengo (which translates as Barbarian Horde), an international running club based in Tokyo. “The Japanese love to run,” Chika explains, evidenced by the 50 to 60 members who show up for the club’s weekly workouts.

Jayme Moye, award-winning freelance journalist, writes about the people, places, ideas and events that are changing the way we think about our world. Find her at jaymemoye.com.