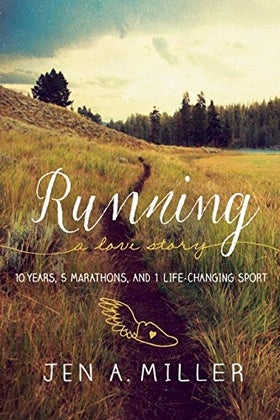 Republished with permission  from Running: A Love Story: 10 Years, 5 Marathons, And 1 Life-Changing Sport by Jen A. Miller.

After Jason and I reached our inevitable, slow motion car crash of a conclusion, three options presented themselves, running—wise:

1. Stay the course. Despite bottoming out at the end of the race, I was still in the best running shape of my life. The Philadelphia Half Marathon is at the far end of the fall racing, bumping up against the start of spring’s training season. I could roll that training over into setting another PR in the Ocean Drive 10, and try the half again at one of the dozen spring races in the area.

2. Take a break, at least at distance training, just like I planned to do with dating.

I went with number three, and set this goal: run a marathon, and run it fast enough to reach a marker that is considered a mark of excellence for the amateur runner—qualify for the Boston Marathon. I saw no reason why I could not do this. I had been posting faster times, and I didn’t see any reason why I couldn’t set a high bar and reach it, especially when my state of mind wasn’t so much “la la la I love running so I should do more of it and be good!” but “grim determination.”

Related: How You Fell In Love With Running

Running harder hadn’t helped me get over Jason the first time around, but I didn’t blame the running or the training. I blamed getting sick, my sister’s wedding, me me me in the wrong. This time, I told myself, I would do better, and it would work.

I printed out Hal’s Advanced 2 marathon schedule, the most difficult one he offered. No matter that I’d never done a full marathon before. In addition to 400-meter repeats and tempo runs, this schedule added 800-meter repeats, hill training and pace runs with only one running day off per week instead of two.

I targeted the New Jersey Marathon on May 2, which meant 18 weeks of training, staring the first week of January.

As I took a running lunge forward, the sport did too. From 2000 to 2009, the number of finishers in U.S. road race increased 37 percent across all distances, according to Running USA. In 2010, they produced its first ever half marathon report because of what they labeled its “astounding growth.” Marathons saw 10 percent more finishers in 2010, the largest one-year percentage increase in the distance over the previous 25 years. Marathoning, Running USA reported, had become a “mania.” In 2009, women surpassed men in races too: 53% of race finishers were women (5.4 million) compared to just 23 percent in 1989 (908,000).

“Training for and running a marathon is something that one can control unlike the stock market or the economy,” Running USA wrote in their 2010 marathon report. And, for me, a way to tighten control over my emotions, find some sort of solace in the wake of being dropped – again.

I was going to take running, which had failed me at a crucial part in my life, and pin it to the ground. With hard training, I could crush it, dominate it, make it my bitch. If I wanted it enough, tried hard enough, trained hard enough, I could control running and center at least part of my life. I would not let the breakup with Jason remind me that I was a failure, that no one would love me, that I would die alone. If I ran hard enough, even if I ran alone with my podcasts again instead of a glorious, gorgeous human being who proclaimed he loved me, I could win.