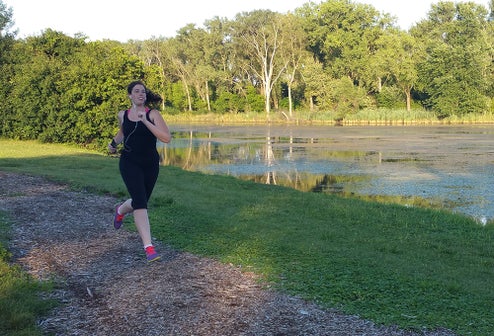 With more and more plus-size women gracing the pages of magazines and proudly sharing their bodies on Instagram, it’s finally starting to feel as though we’re opening our minds to the idea that bodies of all shapes and sizes can be beautiful, even sexy—but acceptance shouldn’t stop there. One of the biggest stigmas plus-size women battle is the assumption that their bodies are incapable of being active or strong, which is why seeing Erica Schenk triumphantly jogging on the August issue of Women’s Running is so significant. Anyone who hits the trail regularly knows that runners have varied proportions, and Schenk’s cover and spread is a much-needed reminder that running—and fitness in general—is never off-limits to anyone.

Not all plus-size women are fitness-phobic, but fitness phobia plagued me for most of my life prior to losing weight. Of all the sacred tenets of the fat girl feng shui, the one I embraced most completely was avoiding exercise for fear of humiliating myself. Being the big girl in P.E. class growing up made exercise abstinence feel like a survival tactic, not a choice. As P.E. is where most of us first come into awareness about fitness and our relationship to it (at least in the Midwest), gym class is where many of my misconceptions about exercise first took root.

Before the high school movie glorification of jocks and varsity teams, the sporty kids were the esteemed elite on the playground. There were those intrepid career “It”s who could always reach their target during a game of tag, and let’s not forget the kids who easily skipped every other monkey bar, making it look as easy as stepping over sidewalk cracks that might cause mom’s sciatica to act up. In P.E. these were the kids whose faces never reddened. Their ambitious little limbs could run brisk laps without the Pavlovian prompt of the ice cream truck. Something about them was different, and because “Je ne sais quoi” is as satisfying to a kid as, “We’re almost there,” I started looking for quantifiable differences between them and myself. It didn’t take much scrutiny to notice they were smaller than me, agile in a way that I wasn’t. They were athletic. They were slim.

As time passed my embarrassment about my physical fitness soured to indignation, and I soon resented being required or encouraged to exercise. I’d cross my arms, refuse to get my heart rate up, and flail around in the beginner’s lane of the pool fighting buoyancy on principle. If ever an obstinate bead of sweat appeared on my brow, it was the result of my flamboyant attempts to pantomime exercise. I wasn’t always incapable of performing either; just unwilling. I convinced myself that my body reached optimum performance on the couch, and that was the restrictive pessimism with which I approached each flight of stairs that didn’t mechanically escalate me to the next floor.

Being athletic seemed to be out of my reach, not the least of which because I thought my body couldn’t be used that way. The round, lumpy form I inhabited worked well enough to schlep me to work or out to dinner with friends, but that’s all it was good for. My body was a jalopy, not a high-performance vehicle. In those days I supposed that athletes were born, not made, and in so doing flung myself into the hopeless cycle of wanting to use my body for greater things than making a cushion dent, but feeling like I had neither the body type nor the right to do so. Fitness was for those more worthy, able-bodied people, and Funyuns were for me.

I remember what I used to think when I’d see women jogging around my neighborhood. Donning their most comfortable washed-out activewear, their bodies ranged from petite and plump to statuesque and curvy. Few of them had the sinewy proportions I’d come to regard as the Official Runner’s Body. I’d laugh and shake my head at these women pounding the pavement in their purple sneakers, their ponytails moving faster than their legs. I felt sorry for them because they had something to prove. I lamented their apparent comfort with public humiliation. Above all, I assumed they were chasing weight loss and falling short of the finish line. And there’s the (chub) rub: I assumed, like too many people do, that people with more meat on their bones exercise only to fulfill a desire to lose weight.

All these imaginary standards I assigned to exercise were wrong, and it may be the single greatest regret of my life that it took losing 120 pounds to realize just how foolish I was. For too much of my life, I let my shape exclude me from fitness. Without questioning anything, I wholeheartedly accepted that weighing more and having love handles meant that you couldn’t or shouldn’t exercise—unless of course you were trying to lose weight to have the type of body that was “made for exercise.” I thought fitness could only be a solution for plus-size women like me, not the hobby, stress-reliever, or method of self-care that it was for average weight people, and that was a criminal misconception.

Seeing a plus-size woman captured in motion on a running magazine is so important because it counters the collective assumption that fat people are unwilling and/or incapable of being active. What’s more, it shows everyone who might have a little more jiggle that having a so-called “runner’s body” does not a runner make. Runners are simply people who run, and how they perform on the track isn’t determined by what size dress they wear. People of all shapes and sizes have outperformed me on the running trail and in the gym enough times that I know the recipe for humble pie by heart. It’s incredibly unfair that we use a person’s size or body type to appraise not only their beauty, but their fitness potential as well.

Every woman—regardless of her weight—may not choose to train for a marathon or even run a full mile, but fitness is available to everyone who does choose to participate. You don’t have to be a certain size, look like anyone in a commercial, or make protein shakes. Fitness is for women who are trying to beat their best mile time and those who have just recently dusted off the old treadmill in their basement. Despite our biggest fears and our harshest critics (which are often ourselves), every woman can be active if she chooses to be.

These are the things I wish I’d known on those days when my body most felt like an anchor. If I could go back, I would tell myself that fitness doesn’t have to wait until I’ve shed a certain number of pounds. I would challenge myself to go for even the clumsiest jogs that I was too scared to take because of what people might assume about me. I would encourage myself to define my relationship with fitness based on what makes me feel happy, strong, and empowered. I wouldn’t for a second let my shape hold me back from finding out all the amazing things my body is capable of doing. I know there are many other women out there who still feel the way I felt, and I hope that when they see Erica Schenk’s cover, they’ll feel brave enough to go out and use their bodies in all the ways they thought weren’t possible. Every woman deserves to approach fitness on her own terms, not society’s.

How Do We Build a Fit Nation?