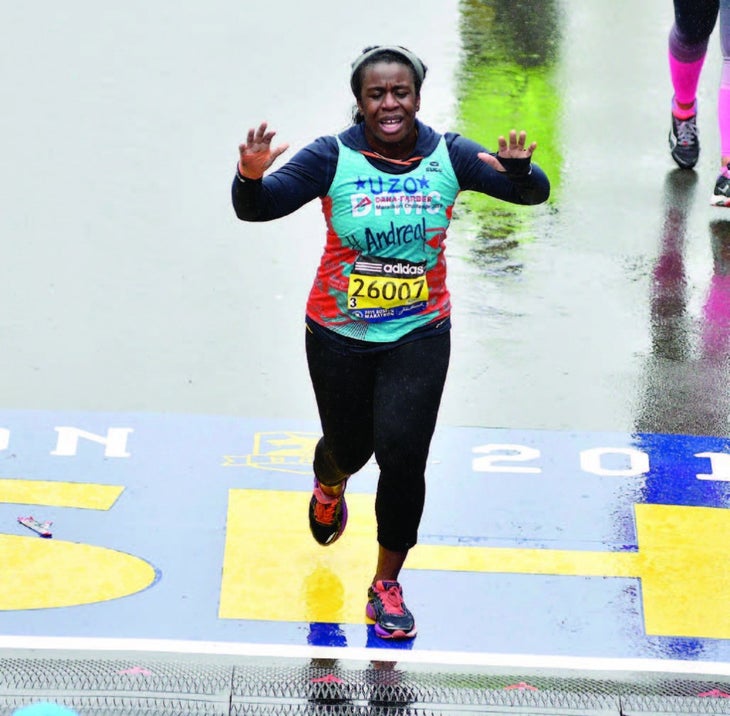 Congratulations to Uzo on her second Emmy for her role on “OITNB”! Watch her speech here.

Just like her scene-stealing Suzanne “Crazy Eyes” Warren in “Orange Is the New Black,” Uzo Aduba is a multifaceted character. At 34 years old, Aduba is an Emmy winner (for her role on “OITNB”), an opera singer (she’s performed at the White House) and a former track star (she attended Boston University on an athletic scholarship).

In 2013, the college sprinter added marathon finisher to that impressive list with a 5:17 finish at the New York City Marathon, where she ran for Team Continuum, a nonprofit that helps cancer patients pay essential non-medical bills.

Aduba again flexed her endurance muscles this April, when she ran the Boston Marathon (5:03:24) to raise funds for the Dana-Farber Cancer Institute. The runner says the experience of losing an aunt and a cousin to cancer, along with the woman she describes as “her second mom,” was her marathon inspiration.

Congratulations on your Boston Marathon finish! Were you happy with the way race day went for you?
Uzo Aduba: I really was, especially given the conditions. Running in the cold and the rain was no small thing. I wanted to improve after New York, and now, having run New York and Boston, I know very clearly what my new goal is. Especially after speaking to a teammate about her time, the competitor in me came alive.

Would you care to share that goal?
UA: No! (laughs)

You were a sprinter at Boston University. What was it like transitioning from short distances at high speeds to long distances, focusing on endurance?
UA: My coach in college must just be bewildered. Anyone who knows me knows I was not a fan of distance running for the longest time. It’s a difference in mentality. The transition for me was when running became more about meditation and restfulness.

Endurance running brought me a lot of necessary peace in a city [New York] that has so much movement. But the sprinter in me has never died, whether I like it or not. The final half mile of every run is a race to the finish line for me. I like that speed. I like the hustle. I like the power. I like the sense of chasing down the line.

What inspired you to run your first marathon?
UA: When my best friend, Mark Crowley, suggested the idea of running for Team Continuum, I had three people close to me living with cancer and one person who had passed. I felt like I had to do something.

Did you know you wanted to run a second one after NYC, or did you think you’d do one and be done?
UA: After New York, I did feel bitten by the bug. I felt the itch from that bite. I didn’t think I would actually scratch it. The sprinter in me thought, Good, you’ve made the point. You’ve done one marathon. Why do it again?

When Crowley introduced me to Dana-Farber, my heart was moved to do it. I felt like I had to. I wanted to scream from the mountaintops: My aunt’s life matters. My cousin’s life matters. All the people who have left this earth too soon—their lives matter.

Were you able to use running to help cope with your grief and loss?
UA: Absolutely. Running helped me breathe. I didn’t even know I was holding my breath when it came to those people and their struggles until I went out for a run. Running just gave me a way to express my feelings, other than sitting around and crying or not going outside. It makes you feel like you can shed your sadness for a short time.

Any running advice for first-time marathoners?
UA: Number one, I would say: Know you can do it. Fight through the hurt. Also, run your race. This is true for life in general too. It’s so easy to get caught up in what everybody else is doing, but you’ve got to run your own race and do what feels right for you.