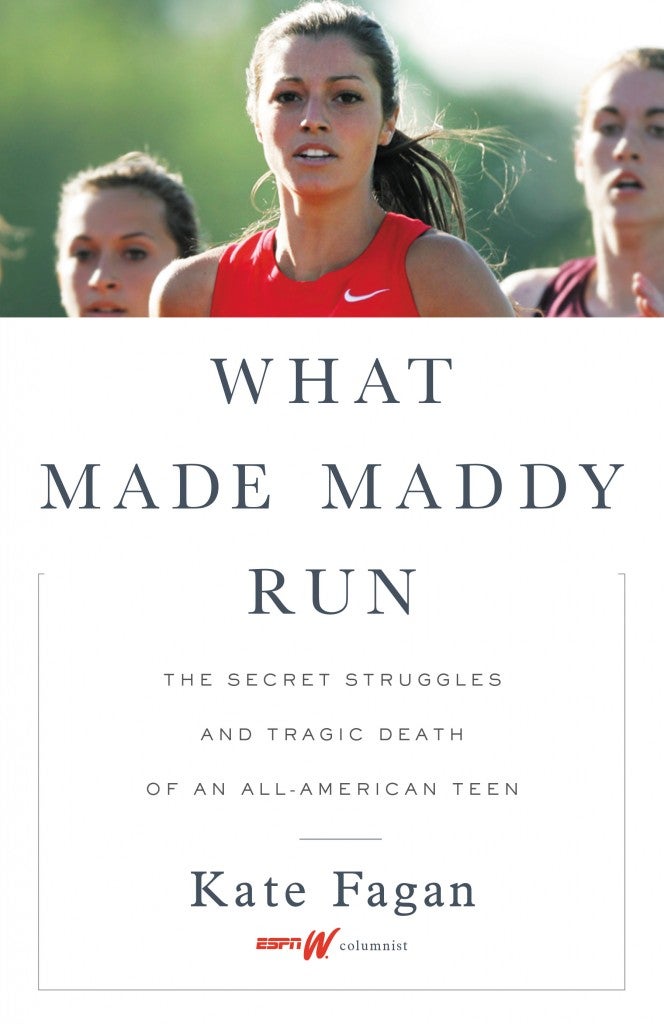 When Kate Fagan’s What Made Maddy Run landed on my desk, I was asked if I would be willing to read it and write a review on it. I was familiar with Maddy’s story after reading “Split Image” on ESPNW and anxious about diving deeper into her whole life. If you are not familiar with Maddy Holleran, she was a competitive soccer player and runner that attended University of Pennsylvania, where she continued to chase after her potential on the track and in cross country. In 2014, at just 19 years old, Maddy died by suicide by jumping off the ninth story of a parking garage.

EVERYONE IN MADISON’S LIFE holds a piece of her story, possesses a clue: a text message, a vacant look, a deleted Instagram post. In the days after she died, the people who knew her best converged on Allendale, New Jersey, her hometown; siblings (one brother, three sisters), parents (Jim and Stacy), high school friends, college classmates — all offered their shattered piece to see whether they could rebuild Madison.

The book, set to release in August, dives deeper not only into the events leading up to this devastating moment, but it also explores larger issues that were at play in Maddy’s life—social media, depression, drinking, pressures to perform at an exceptional level as an athlete. It explores core issues and hurdles that runners—and just young people in college—face as they grow and work to discover their identity both socially and personally. Throughout telling Maddy’s story, Fagan does an exceptional job weaving in her experience of venturing into Maddy’s troubled past as the author, and she shares how grateful she was for the openness of Maddy’s family and friends to help shape the story.

“Telling Madison’s story has been one of the most important experiences I’ve ever had,” said Fagan about telling Maddy’s story. “It’s connected me, more deeply, to the struggles we each go through, and those around us all have. My hope for this book is that it allows young people, as well as their parents, to start an honest conversation about their experiences in high school and college.”

In one particular passage, Fagan describes a moment where she felt compelled to dive further into Maddy’s laptop for information, where so many of the untapped archives of her life seem to haunt her into clicking on them and finding out just one more piece of Maddy’s puzzle:

I scan the icons on the desktop. None are what I want. I look at the dashboard, scroll through the applications. I carefully consider each. I’m definitely looking for something. My mouse scrolls over Reminders, then Notes, then FaceTime.

The Social Media Side

I’m 30 years old, so Facebook was hardly a thing when I was in college. I first heard about “this new website for college kids” as I was driving to buy things for my freshman dorm. Instagram didn’t even exist. So reading about this runner’s experience navigating the woes of college in a world where Instagram seemingly dictates your social status and sense of self-worth was completely eye-opening to me. Sure, I have Instagram now and use it pretty regularly, and so much of what Fagan touches on regarding Maddy’s struggles resonated hard with me. I just didn’t have the added pressures of needing to appear a certain way on social media weighing me down during my college years. And when you’re 20-something and wanting to show that you have friends and are at the hottest parties, social media is handing you that platform to do so. You can be whatever you want on Instagram. But when your Instagram self begins to serve as a blanket to what your true self is really experiencing underneath the surface, there’s no way for anyone, including Maddy’s friends, to tell the difference.

Fagan beautifully describes the final photo Maddy posted to her account on January 17, 2014:

It is this last photo that Maddy began editing. She made the color pop; the benches go from dull brown to a fiery red; the lights morph from small pops to glowing, gorgeous lanterns. And the night behind the foreground went from looking just like any other to appearing as something spectacular—a city park placed underwater, submerged, radiating.

Throughout the book, Fagan also inserts actual lines of text message conversations and emails, ensuring the book authentically reflects Maddy’s character, struggle and story. As the reader, experiencing actual transcripts of her life made me feel simultaneously connected with Maddy but also so disconnected from her. The short-ended responses to her asking for help felt so harsh in the context of the conversation, similar to the reactions I have received when grappling with my own internal struggles. But as the book goes on, you realize just how severe Maddy’s battle with herself was, that it stood alone as something more than just young adult angst—and perhaps those closest to her didn’t know what to offer. It ran deeper than simply a girl trying to fit in, and Fagan does an exceptional job at driving that point home. Many elements are described in such depth—specific moments where Maddy looked visibly empty—that you can see her face in front of you as you turn the pages.

As a runner, Maddy so obviously struggled with what so many of college recruits struggle with—going from the top to the bottom. I had this very conversation with an old high school teammate of mine, who went on to run for University of Oregon. We spoke about the book and the particularly relatable pressures we’ve both felt at the competitive level to perform under high stakes that only a fellow athlete can understand. Running in college adds another layer to the pressures that often manifest as early as middle school, a reality that my teammate was very familiar with, having run at one of the top schools in the country. Similarly, Fagan does an exceptional job at inserting her own reflections as a competitive athlete and how Maddy’s struggles deeply resonated with her as well.

It can be debilitating when you’ve unknowingly—or knowingly—built your self-worth around a singular sport or thing you’re good at. Then you’re sought after by interested universities for being good at that thing, only to discover that you’re actually not the best anymore once you land on a team. Teammates are faster, times are better and competitions are, well, more competitive. This is an ongoing theme throughout the book, as Maddy ping-pongs back and forth between quitting the team and sticking it out. She ultimately gets “encouraged” to hang on a bit longer, just chapters before she takes her own life.

The entire memoir was difficult for me to read, just seeing parts of myself in Maddy’s story and wondering what that meant. When it came time to read about when Maddy jumped, how she propelled herself off the building and the reactions from her family, teammates and friends as they all slowly found out what had happened, I was shaking. I had heard the story, seen the ESPNW special on Maddy and knew what was coming. I felt so deeply for everyone involved during that final chapter. Fagan delivers the sequence of events in such a heartfelt but very real way, you can almost see the emotions and panic behind the faces of those receiving the calls and emails and text messages.

As I closed the book and sat with it for a few minutes, I felt a pull to search “Maddy Holleran” on Instagram again. And sure enough, that final image of a beautiful view with filtered bright lights and a happy caption was still her final photo ever posted. And in the comments, the most recent being just yesterday, were repeated reminders that Maddy did—and does—have all the love in the world.

The book comes out Aug. 1—find out how to pre-order at Fagan’s website.

If you are struggling with mental health issues and suicidal thoughts, there is a National Suicide Prevention Lifeline available to help.

After Overcoming Depression, A Runner Reflects On Her Year