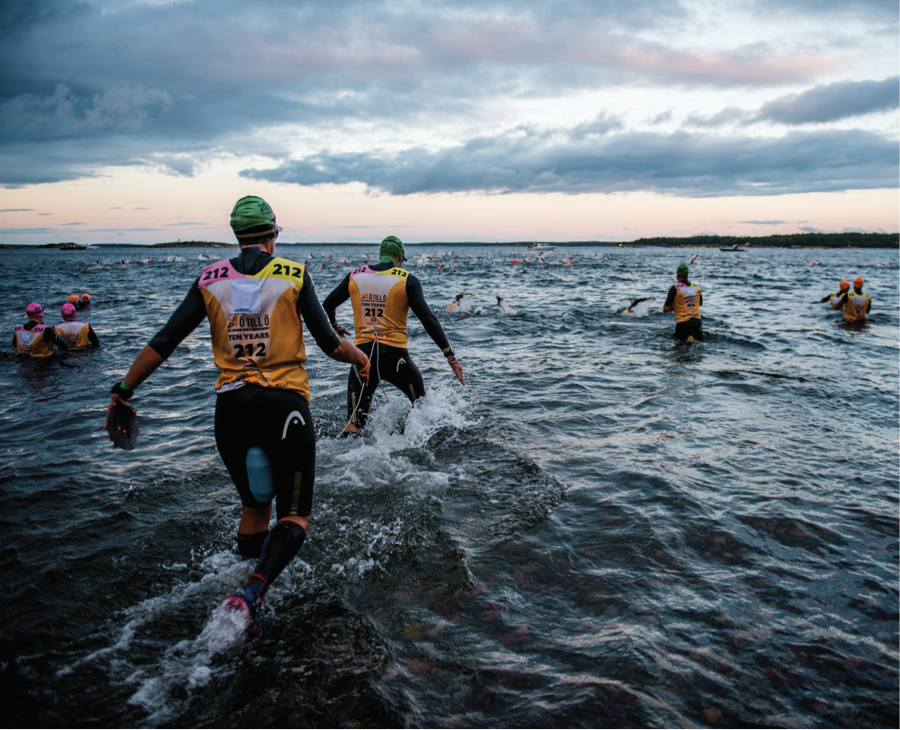 I put the Ötillö on my bucket list since it’s a perfect partner-friendly challenge. My husband and I adore endurance sports, but neither of us will ever win a race. In fact, I only started running six years ago to mark the occasion of my 40th birthday.

The thrill of the SwimRun is that it’s you and your partner against the land. You’re not running in a big group with a nicely defined course. Instead, you’re pulling yourselves out of the Baltic Sea only to slide on the rocks and fall back in; you’re trying to determine trail markers—is it right or left?—through the dense woods. Nothing is as empowering as crossing these islands and earning your badge of honor from Mother Nature.

We qualified for Ötillö by competing in shorter SwimRun events. Our past races have had one or two cutoffs (points at which if you weren’t on pace, you’d be pulled from the course). Ötillö has five, and they are very tight indeed. The weather forecast for the race showed unseasonably cold and wet days. This was a concern because even though we trained faithfully and were in the best shape of our lives, the slippery rock trails can feel like running across sheets of ice.

RELATED: This Race In Sweden Takes You From Island To Island

Our wetsuits had been patched up after a past race, where they were torn from branches and tree trunks. And we figured why bother investing in quality suits when they would just rip again. As race day approached, the weather improved and warmed, so the day before we decided to cut the arms and legs off of our wetsuits (still wearing our long sleeve Merino wool shirts underneath) as it would be too hot to run the 21K stretch in a full wetsuit.

This is what’s called a “rookie mistake.”  Now I understand the adage “race in what you train in.” The night before the race, the rain tapered to a drizzle but that  ultimately meant wet terrain. We had been forewarned about the first leg of Ötillö moving very slowly because of the technical running, and this was reiterated during the race briefing: extremely slippery, deep drops, safety first. Oh, and the current looked to be the strongest in the 10-year history of the race.

Race morning, all teams were kitted up and ready to go. You run from the main lodge 1.2K along a muddy path through the woods, down to the water where the longest swim is your first: 1.75K. It can be confusing between looking for the strobe light on the other island and seeing the lighthouse flashing, especially when the water is choppy.

I was in fine form and took off in the water, but my husband was nowhere in sight. I waited, and then swam back a little. It was the oddest thing. I could see him madly crawling with his hand paddles but he wasn’t advancing. And he’s a strong swimmer.

So without properly testing our wetsuits after we cut them, and following three months of training, he was sinking as water pooled under his arms. As we lagged in time, the waters became dangerously rough. By our fourth swim, the 15 minutes it should have taken us to do 500 meters took nearly an hour as the wetsuit continued to balloon. On land, we went all out, took risks, falling on our ribs,  cutting our knees, trying to protect our heads—but it was a lost effort. We didn’t make the initial cut off.

For the first time for either of us, we did not cross the finish line. Disappointment, humiliation, lack of confidence—all of these emotions would come once I thawed out. However, we were in good company. Rory Bosio took a wrong turn and didn’t make the cut-off either. Nor did a mixed team that was part of Pippa Middleton’s group, and they had all trained on the course and carried the most expensive equipment you can imagine. And it goes when you race against nature.

The day after the event, we went to Wolff-Wear in Stockholm for some much-needed retail therapy, indulging in top-of-the-line wetsuits. Lesson learned: Invest in the equipment as much as the training.

We will head back for Ötillö this year and will keep doing so until we cross that finish line. It’s my white whale.

What Makes Curaçao One Of 2019’s Top Race Destinations