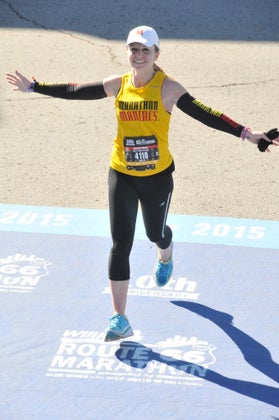 Running inspires a lot of thoughts and feelings—some good, some bad, some empowered, some occasionally defeating. They can change by the minute, mile, and month. When I think about running, my thoughts are as scattered as my splits.

When I think about running, I think about the freedom it has given me. In many ways, running has released me from the gripping self-doubt and low self-esteem that plagued me for much of my life. While running is never easy for me, the fact that I have stuck with it when it gets tough, completed my first (and 50th!) marathon, and pushed myself out the door even when I didn’t really feel like it helps me to know that I can accomplish anything I put my mind to – except maybe a 5 minute mile. That’s probably not going to happen.

When I think about running, I think about adventure. Running has taken me to new states across the country and new countries across the world; new routes in my own city, and helped me get to know new cities when I’m traveling for work. Running is as exciting as we make it! Maybe not everyone has the capacity or the desire to travel all over the place for races, but everyone can mix up their running routes at home. Running takes me places I never expected to go—and if I don’t do enough research ahead of time, sometimes those places are kind of sketchy. Live and learn.

When I think about running, I think about connection. Running introduces me to people all over the world, be it through races, my blog, running groups at home, or connections in conversation. It also deepens the connections with people I already know! My husband recently started running, and having this new shared interest has not only given us something else to talk about, it’s also given us more to look forward to during the week and races to plan on the weekends. It’s amazing how many people run—I have something to talk about with all of them! Who am I kidding? I talk about running with everyone, runners or not.

When I think about running, I think about opportunity. Running gives us the chance to push ourselves in new and unexpected ways all the time. Maybe you’re working on setting a new distance PR or running your fastest mile. Maybe you are trying to overcome your shyness and head out for a group run so you can meet people in a new city. Or maybe you’re hoping to run a race in a new place! There’s tons of opportunities for growth, and running opens doors to many of them, whether running-related or not. The confidence that running grows in us can build many bridges if we let it!

When I think about running, I think about myself. Running doesn’t define me as a person, but it is a huge part of my life – something I never expected when I started! Even if I never run another mile, I’m intrinsically linked to this sport because of everything it has done for me and given to me. Yes, the past 6 years have changed me. No matter what, I’m a runner—and that’s a powerful thought.