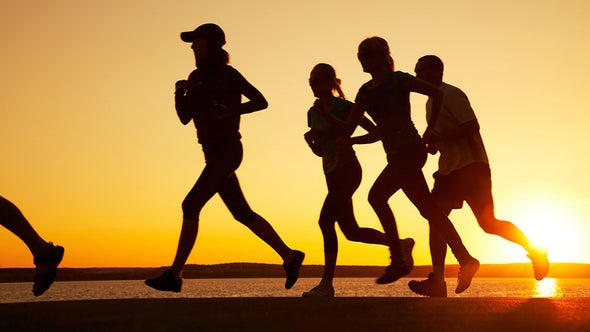 I’m a total loner, especially with running. I’ve been criticized for this “flaw” over the years, and the broken record response tends to be a version of “Well, running really is my me time, so I prefer to run alone.” While that is 100% true, I also just really don’t like people around me when I’m running. It’s because of my obsessive personality when it comes to the sport, and because I just really have wonky form that might flail out of control and slap a running partner in the face, shoulder, arm, knee, foot or ego.

However, I do recognize that this could actually be a real flaw—why do I hate crowds so much when I used to run every day with my cross-country squad and in packs 100-deep at major meets around the state? I could make a weekly run group feel like the same thing, right? It can’t be that bad.

Related: I Discovered The Magic Of Running Groups

Turns out, it really wasn’t. The resting bitch/I-want-to-die face I usually have permanently plastered on myself while running seemed to disappear when I decided to join society and make a couple of Monday night runs with a group through my coastal neighborhood. I actually smiled and greatly enjoyed myself, and I definitely learned a few handy things along the way:

1. You don’t have to tempo every run, and you probably shouldn’t. I’m one of those “hammerheads” that needs to collapse at the end of every run to feel like it was worth it. Well, at least I used to be that person. It was definitely freeing in an unexpected way to not worry about the watch, the time or the pace and just run with other people, listening to them small talk their way through 5 miles. It was relaxing to just listen, smell the ocean and know that life is okay today.

2. Other runners aren’t scary human beings. I actually had a lot in common with these other runners I’d never met before, and that extended beyond our one obvious shared interest.

3. It’s okay to be okay with trying something new. I have this 28-year-old habit of thinking that trying something new means something else is not going right enough. Why do you need to bring in new when the old and “normal” is fine? And on the flip side, trying something new might mean admitting the norm isn’t cutting it anymore. While many people thrive on the “try anything once” mentality, I tend to fear it. My anxious, often colitis-driven mind scares easily; although those that know me would praise me for bravery pretty regularly. Newsflash, my buddies–going to a run group was, like, way outside my comfort area.

4. You step into the way running looks and feels to another human. This. Is. Important. Too often we get caught up in our own struggles with the sport, whether that be a physical setback, mental roadblock or just the pursuit of our race goal—with a side of tunnel vision. For me, I too, too easily get swept up in the romantic, heartbreaking side of the sport, as well as the politics behind it given the nature of my job. In short, we get disgustingly selfish in a way that doesn’t serve us or the people around us. I internalize it and create unrealistic stories about myself as a runner, and the habit becomes toxic when you’ve been doing it for years. At the running group, I was able to take a step back, talk to others about their dreams, their goals, their wishes. I kept my job to myself, avoiding the common flood of questions about working at a running magazine and how dreamy it is. This is about you, not me.

5. You are not judged. I’m my own worst critic, and surprisingly (at least to me), that critic shut her annoying mouth at the running group. All I felt were the high-fives from others and the “How was your run?” questions.