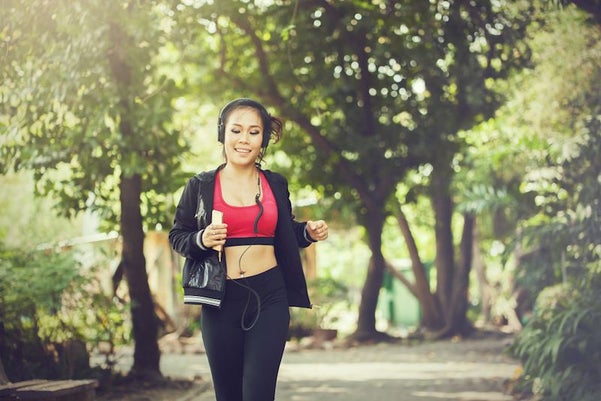 What Is Weav Run?

It seems like there’s a new running or music app practically every week (this might actually be true). This week, the focus is on Weav Run, a free music-fitness app created by Lars Rasmussen (who co-founded Google Maps) and Elomida Visviki. The goal of Weav Run is to help runners maintain or improve their pace by adjusting the tempo of the song they’re listening to in that moment. When you’re sprinting, the song will speed up, as if it’s on fast forward. If you start to slow down, the app will be the first to let you know by pumping the brakes on the music, either matching the song’s original slower tempo or stretching it out so it’s playing in slow motion.

Related: Our August 2017 Playlist On Spotify

Weav Run is more fun to experience than it sounds—and oddly helpful. If you’re going out for a training run and intend to maintain a competitive pace, this app is useful for alerting you when your pace dips. “Running in sync with the music will unlock your potential to run faster and longer,” the app explains on one of its opening screens. It can also prevent runners from starting too fast on longer distance runs, allowing users to gauge an appropriate starting tempo so that they don’t burn all of their energy in the first few miles. The most fun way to experience what Weav Music can do is by throwing a random sprint into your run: it’s amusing to listen as the music races to keep up with you, and satisfying to hear the difference in speed as your feet fly.

Weav Music has rubbed elbows with several large music labels, including Sony Music, Warner Music and Universal Music Group, meaning music by many of today’s popular artists are available on the app. However, the app’s focus so far seems to be on EDM and electronic remixes of popular pop tracks. This makes sense, since most EDM tracks provide strong, undeniable rhythms–but fans of other genres might feel the lack of their preferred music after extended use.

Since the app is so new, its developers are still working out a few kinks. For example, the app is slow to recognize a user’s request to switch songs (slow being a relative term: it only take a couple of seconds, but most users are used to the immediate responses they get from apps like iTunes or Spotify), though this is likely due to the real-time tempo adjustments and easy to fix. Weav Run also has just one of its three promised settings available to users at the time of this writing: “Just Run” is the tempo-driven setting that enables users to run as far or fast as they want while the music fluctuates in time with their pace. “Pace Control” and “Interval Training” are still to come.

It’s interesting to note that Weav Music’s co-founders have suggested that this app has the potential to inspire a whole new era of music that’s created with adjustable rhythm and tempo emphasized above all else. “Adaptive” music isn’t a new idea (deejays have been manipulating the sounds and tempos of music in real time for decades), but it is unusual for listeners themselves to have the power to adjust their own listening experiences based on the actions they take (or, rather, the moves they make). Whether or not Weav Music can direct music creation down a new path remains to be seen; in the meantime, we’ll settle for observing the extent to which it influences basic running habits.

App Lets Runners Run In Favorite Location From A Treadmill

You’re Not “Stuck On The Treadmill” With This App