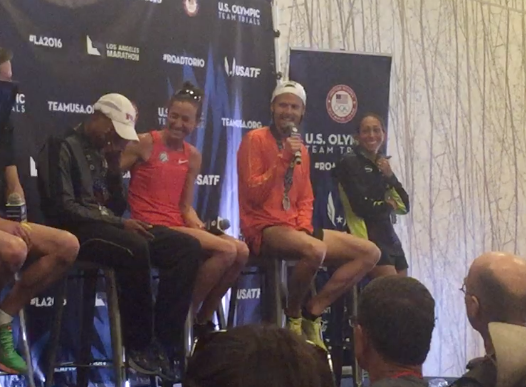 On a blazingly hot morning in Los Angeles, Meb Keflezighi became the oldest American man ever to make an Olympic marathon team. The 40-year-old’s gutsy performance at the Olympic Marathon Trials was in keeping with the brave, cerebral racing strategy that has become his calling card over nearly three decades in the sport.

While 29-year-old Nike athlete Galen Rupp nailed the win, it was Keflezighi who earned the loudest cheers as he strode through the finish line in second place, holding a little American flag and waving ecstatically to the crowd. Before the race, Keflezighi noted that this would likely be his last chance to make an Olympic team—and he wanted it badly. The father of four sacrificed three and a half weeks away from his family during peak training in order to be as prepared as possible for the big day.

Related: What The Heck Happened At The Olympic Trials?

At the press conference following the race, a reporter asked the other Olympic Trials winners on stage—Galen Rupp, Amy Cragg (first for women), Jared Ward (third for men) and Desi Linden (second for women)—to say a few words about Keflezighi. After Cragg, a former teammate of Keflezighi expressed her admiration for the runner, Keflezighi put his hands to his face to wipe away the tears. “Meb is an incredible athlete and that pales in comparison to how wonderful a person he is,” she said. “He truly is just a wonderful person.”

If you’re a fan of long-distance running (or loving human beings), watch this outpouring of admiration and prepared to be moved.

In Her Power: Mary Cain Focuses on a Healthy Future For Girls and Women in Running