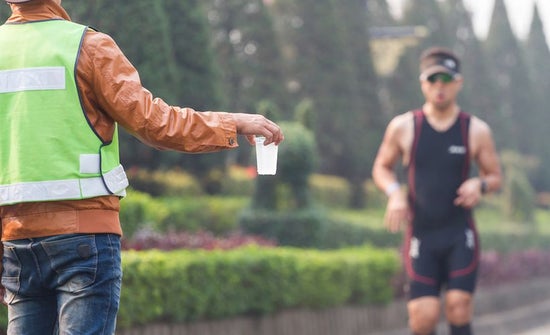 We witness athletes push the limits of exhaustion all morning and afternoon, providing them with moral and medical support–Gatorade, bandages and pretzels included. But sometimes, more antiseptic is needed than sustenance.

Adding to the urgency of each fleeting moment, the competitive runners leave little time to waste on their own well-being. We are much like a pit crew at the Daytona 500–except the vehicles we mend are athletes running through the remote wilderness.

Maggie is quite familiar with this scene. Not only does she have experience as a trail runner, but she is also a certified physical therapist and athletic trainer. As I fail to distract her with questions, she watches for evidence of injuries and exhaustion.

Related: 5 Reasons To Volunteer At A Race

A handful of medical personnel are dispersed throughout the course, but Maggie stands at one of the most critical landmarks of the race: the last four isolated miles of an epic 18.6-mile trail run through the Catskill Mountains. Hundreds of optimistic runners gather at the starting line. Not all of them make it this far.

The Escarpment Trail Run is well known for its unforgiving terrain, and there are plenty of runners pushing the natural limits of fatigue when they reach our respite. The Stoppel Point aid station marks the 14th mile of such technical footwork.

As most of the runners have already taken a few painful spills by this point, Maggie serves a very critical role. She knows how to patch a person up to help them reach the finish line. Considering the only alternative to schlepping four isolated miles to get there is an expensive helicopter ride, her patients are highly motivated. Nonetheless, she faces a long day of mending flesh wounds and monitoring exhausted runners. Meanwhile, I simply hand out granola bars and cups of water.

A runner stumbles into the aid station and haphazardly sits on the ground. Maggie snaps into action with all the right questions and the weary runner responds with the right answers. However, there is an element of concern for this person that exceeds such things as the previous runner with a rock embedded in his palm.

Exposed blood has instant shock value, but there are far more serious and subtle dangers for those on the brink of exhaustion. Fatigue-induced delirium could send a person stumbling into a ravine, and electrolyte imbalances could send a person into cardiac arrest. Maggie never allows a runner to move on unless they prove to be coherent.

Deciphering a runner’s physiology as they dart through an aid station is much like playing charades. I witness many runners using hand gestures to communicate their needs in between sucking wind and guzzling calories. As the weary runner once resting on the ground heads back down the trail, Maggie sends a message to the next aid station to let them know what to expect. The game continues.

Related: 5 Trail Races Perfect For Runners Of All Abilities

Another runner hobbles over with a bandanna and a strap from his pack wrapped around his knee. Blood covers his leg from his kneecap to his shoelaces. He barely lets Maggie clean him up before heading back out on the trails. With a touch of antiseptic and fresh gauze underneath his makeshift bandage, he’s ready to run again (even though Maggie is fairly certain she saw his raw patella in the process). Her day proceeds as such.

I am told the race director has novelty buttons available for runners injured on the course, and I assume the person with his kneecap exposed to the elements qualifies for one. At the finish line, however, there are no takers. In fact, no awards of any type are distributed.

These athletes do not enter the Escarpment Trail Run for public accolades, and the same is true for the noble volunteers. The reward is in the experience alone, and such an experience is what keeps them all coming back for more. I am just thankful some of them have medical training.

Although Maggie is not old enough to have been alive for all 42 annual Escarpment Trail Runs, she is clearly one of its legends. Such a race exists due to the efforts of these exceptional volunteers. At this particular run, medical personnel are unpaid volunteers; at the Stoppel Point aid station specifically, that volunteer’s name is Maggie Reinhart.

John Pinder is a freelance writer and health educator living in the scenic Hudson Valley of upstate New York. He teaches emotionally troubled youth at a residential facility in Rhinebeck and coaches collegiate athletics for SUNY Columbia-Greene in Hudson. He is also regionally known for his successes as a musician and singer-songwriter.

What Happens When You Get Injured Right Before Race Day

Mind Your Manners: Stick To The Course, Trail Racers