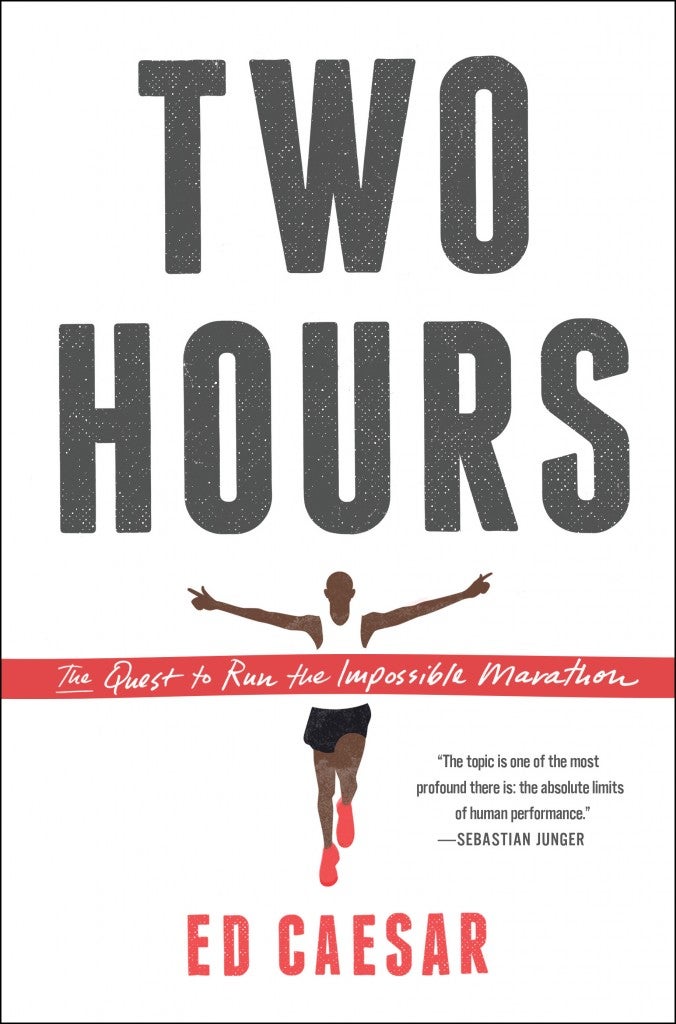 Published with permission from Ed Caesar’s Two Hours: A Quest To Run The Impossible Marathon, available Oct. 27 in the United States.

Shortly before nine on a bright fall morning in Berlin, Geoffrey Kiprono Mutai prepared to run a marathon faster than any human being—even he—had run before. A wild, audacious proposition, to propel one’s body to such a ragged extreme, and he felt the walls of his quest closing in on him. Years of pain for this one opportunity. Competing voices crowding his head. The loudest saying, If only we could start running!

Mutai is five feet seven inches tall, and 125 pounds. He has a wide, expressive face, with a high forehead, elfin ears, and long, gleaming teeth. Most often, you find him amiable, amused, desirous of news and gossip, a flashy smile close by. But now, at this solemn moment, he looked as vulnerable as a foundling.

There were around 41,000 runners behind him. Penned together, they bobbed and lilted like a gentle sea against a harbor wall. Alongside Mutai at the head of the crowd, meanwhile, were two dozen professional athletes whose lives—like his—would be marked irrevocably by the minutes to come. As Mutai ran his final warm-up shuttles, the goosebumps on his chest were visible behind his blood-orange running vest: nerves, or the cold, or both.

Mutai attempted to relieve the tension by telling himself that he didn’t need to win the race, or make history, to be happy. Anywhere on the podium would be okay, this reasonable voice said. The marathon is tough. Anything can happen.

He knew he was fooling himself. It was true, yes, anything could happen in a marathon, and there were many events seemingly outside an athlete’s control—including the body’s reaction to the stress of racing. No athlete, not even a champion, could know when a cramp or an injury might destroy his chances. So Mutai told himself this thin truth—that his effort was enough. Although he knew that nothing but triumph could satisfy him, and even triumph might not suffice, the mental evasion somehow helped him relax. He needed to relax. Tense legs, he knew, couldn’t move.

Mutai said his habitual prayers. For clemency. For strength and for courage. For his stringy legs, veterans and repositories of tens of thousands of miles of training, to carry him another 26 miles and 385 yards. But not for a miracle. He would never ask God for a miracle.

Smiles all around him now: the effervescence of expectation. Mutai could not help but smile too. Despite longing for the starter’s pistol, there would always be a part of him that enjoyed these rich, electrified seconds—the warrior part. He was about to race. Yes, the eyes of the city, and the sport, were upon him. But where else would he want to be? He would shortly express the purest version of his being on the grandest stage imaginable, without saying a word. If the race proceeded as he had dreamed it, he would become not only the world record holder, but a vindicated man. All in a little more than two hours.

My Experience As A Race-Day Wheelchair Pusher