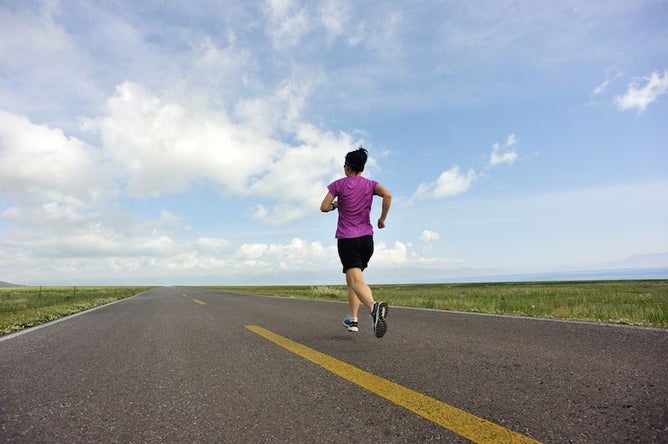 Looking over the results of my pre-admission EKG before I was wheeled into an operating room, an anesthesiologist asked me if I was an athlete. I said no. I told him I taught college writing and was the director of the school’s writing center. My husband Jon added that I am an ultrarunner and had just placed as the third overall female in the 24 Hour Ultra Around the Lake just three days earlier. In quiet astonishment, the anesthesiologist looked at me. He told me that I am an athlete and that I have an athlete’s heart. My pre-admission heart rate was 54 beats per minute.

Related: The Ultra Is An Entirely Different Beast

I began running ultramarathons in 2005. By the time my medically necessary hysterectomy had gone haywire, I’d completed eight ultras (five 50-milers, two 100-milers, one 24-hour ultra) and had two DNFs. If I hadn’t run 5K races, half marathons, marathons and ultras for 23 years, I would not have been physically fit enough to survive the complications of that hysterectomy and to keep sepsis at bay for so long. I may not have been mentally strong enough to endure the physical challenges of my surgically broken and repaired body.

Ultrarunning taught me to embrace discomfort and suffering in the form of bloody blisters, stinging body chafing, blistering skin, nausea, vomiting, thirst, hunger, hallucinations, slurred speech, diminished cognitive ability and sleep deprivation—to push the body beyond it limits and to exercise patience. Ultrarunning taught me that slow and steady finishes the race. The end will come. Finishing is winning. This is how I approached and survived my medical nightmare.

An Ultra Of A Different Kind

On August 1, 2012, I went to the hospital for a scheduled outpatient laparoscopic hysterectomy with an overnight stay. A week later, I woke up with severe nausea and abdominal pains caused by a small bowel obstruction that required surgery. After being hospitalized for 14 days, I was sent home still leaking what appeared to be urine. I was told it was normal because my organs were paralyzed from the surgeries. On Labor Day, I awoke with body chills and a high fever. I landed right back in the operating room. I learned that my left ureter had been transected during the hysterectomy. The transection caused the leaking, the small bowel obstruction, the body chills and the high fever. Sepsis was setting in. My abdomen was filled with toxic urine. A nephrostomy tube was inserted into my left kidney and a urine bag was strapped to my left leg. Because I was in such great physical shape and had a strong immune system, sepsis took longer to settle into my body.

A seemingly routine laparoscopic hysterectomy left me with a grueling ‘ultramarathon’ of a different kind, all during a span of 10 weeks.

What My Body Endured

I dealt with excruciating pain, severe nausea and vomiting. A nasogastric (NG) tube was placed in my left nostril and stomach. A peripherally inserted central catheter (PICC) was also incorrectly inserted in my left arm and then properly reinserted so that I could receive intravenous fluids and medication. To reduce the swelling in my feet and legs, I was given Lasix, a diuretic that contains sulfa, a type of medication. The doctors and nurses didn’t checked my patient chart, which would have told them that I am allergic to sulfa. As a result, I endured a severe allergic reaction.

A urinary tract infection caused by the nephrostomy was treated with Cipro, a black box antibiotic. Although it works wonders for some, Cipro should not be given to athletes. My fingers and hands became painfully swollen and stiff—I had Cipro toxicity. Eight months later, I was diagnosed with rheumatoid arthritis (RA). The bodily and psychological trauma caused my hair to fall out. In addition to losing my hair, I also lost 20 pounds.

My abdomen was scarred from the surgeries. I endured sleep deprivation and had to relearn how lie on my bed and sit on a chair with an uncomfortable nephrostomy tube and a urine bag strapped to my left thigh for seven weeks. Instead of logging my running miles in my calendar, I was measuring and logging my urine output.

The seven-week wait for my ureter repair was mentally agonizing. But I did have support. Jon cared for me 24/7, and my visiting nurse provided care twice a week for six months. Going for short walks helped me cope. Towing a hidden nephrostomy tube and urine bag beneath my running leggings, I went for my first walk on September 11. I walked 1.7 miles in one hour! If I can run 100 miles, I can conquer 1.7 miles.

The surgery to repair my ureter went very well. I convinced my urologist that if I walked five laps around the hospital floor, he would have to discharge me the next day. That evening he came to see if I had walked five laps. I’d walked 15. Victorious, I left the hospital to continue my recovery from home.

The Discipline Of Ultrarunning

To help me stay positive through my tears, I applied the discipline of ultrarunning to my physical, mental and emotional recovery. Ultrarunning requires patience and perseverance, the ability to push the body beyond its limits and bravely endure the pain and suffering that comes with it. With every surgery, procedure, setback and flash of pain I endured, I visualized my finish line. I recalled the pain, fatigue and sleep deprivation I endured during 24-hour and 100-mile ultras. My ultrarunning experience, along with my prayers and faith in God, helped me persevere through every grueling surgery and complication.

Surviving an unexpected medical nightmare—or really any setback that life throws your way—requires physical strength, mental strength, or both. It was clear that ultrarunning had saved my life. Now ultrarunning would heal me and make me strong again. If I could survive my medical nightmare, running future ultras would be a cakewalk. I started training again by logging walking miles and progressing to running. Brisk walking became an integral part of my training. My goal remained the same: to continuing running ultras. Although I had a DNF at my comeback ultra, surviving my medical nightmare made me a stronger runner. I pushed through other obstacles and continued to place in 10 other ultra events.

Five years ago, I endured a potentially life-threatening surgical error that sidelined me for six months. While my story is a cautionary tale about laparoscopic surgeries, it is also a story about resilience and the healing powers of ultrarunning. The 2017 Wildcat 100-Mile Ultra takes place in Pensacola, Fl.—ironically on Labor Day weekend, five years from the day I learned that my left ureter was transected. The Wildcat 100 will be my 21st ultra.

Almost Any Runner Can Finish A 100-Mile Ultramarathon

Grandma Of Three Went From Overweight To Ultrarunner