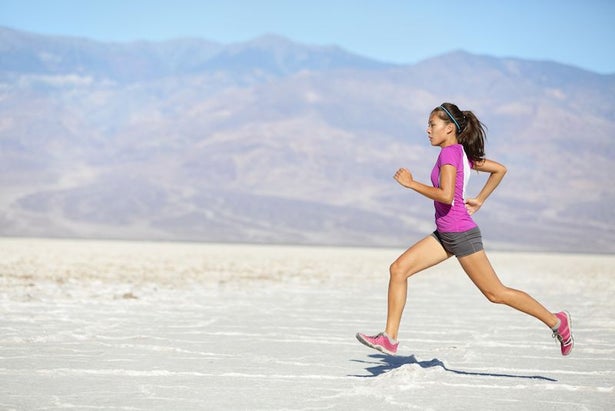 When a friend convinced me to run an ultramarathon, I began to read all the articles and books I could find about training. I read about speed training, mileage, nutrition and the wall–but I never really read an article that compared this kind of race to others. I spent most of my time focused on building my mileage and staying healthy and hydrated. I hadn’t considered that one of the major struggles I would face would be the need to approach this race much differently from all other races I’d prepared for in the past. It turned out to be an entirely different beast from all the races I was used to running.

I’ve been running 5-kilometer and 10K races for about 20 years. During that time, I have developed my own racing strategy: I don’t go out too fast, but I do start fast enough so I can barely breathe. I can usually squeak out a few “good jobs” to fellow runners, but I haven’t carried out many conversations while racing. As I began running the ultra, I found myself comparing what I was used to with this new experience that required running for several hours.

My first thought was about how everyone expects to see participants running around before smaller races, like 5Ks. Runners want to be warmed up for the 3-mile sprint to the finish. But at the ultra, I thought the runners that were warming up were crazy. First of all, wasn’t the distance of the race enough without doing extra? Second, didn’t they think they had an ample opportunity to warm up within those miles?

My next thought was about the starting line vibe: while there’s barely bridled tension at the beginning of a 5K, the atmosphere at the ultra was easygoing and convivial. I think the common attitude among the non-elite runners was, “Why hurry? We need to take our time to make it through these miles.” Meanwhile, 5K runners often try to make their way as close as possible to the front of the pack. At the ultra, everyone seemed content at the middle or back of the group.

Once the race started, I had to fight the urge to move out fast and instead run comfortably and steadily. It took me about five miles to adjust my pace to what I thought I could comfortably maintain for hours.

The next light bulb moment concerned water stops and  bathrooms. I never stop for water during a 5K: it eats up too much time for me. But at the ultra, it was important for me to stop often for water and for bathroom breaks. At the first water station, I took some water without stopping and drank on the run. After that, I stopped at every water station and still felt like I needed more fluid. It was hard to overcome that feeling that I was wasting time, but I eventually realized that I was simply taking care of myself–and that was much more important than the few minutes I’d lost.

Since everyone was pacing themselves, it was easier to carry out conversations. I met many more people during the ultra than I would have while running a shorter race. I normally wouldn’t walk during a 5K, but a friend told me that it was a good idea to walk during the ultra. As I was walking, another runner asked, “Are you using the Galloway Method?” I explained that I was using the “just trying to survive” method.

I was surprised by how focused I remained on my running, rather than on my aches and pains. During 5Ks, I spend quite a bit of time thinking about the pain I’m experiencing. While running the ultra, I was aware that my legs were sore, but I was more focused on what was going on around me than I was on myself. Comments from race volunteers also helped distract the runners and made us feel like we were doing something special.

Although the ultra involves pain and requires each athlete to reach deep inside themselves for strength, I thought it was a much more enjoyable race than the shorter race distances I’ve tried. There was a relaxed, supportive atmosphere during the race. Athletes of all shapes, sizes and running abilities were participating, and they were all inspiring simply because they were there. Though I wish someone had spoken to me about what ultras are really like before my time came to run one, just doing something can be a great way to learn. I’ll definitely be approaching my next ultra with some hard-won wisdom.