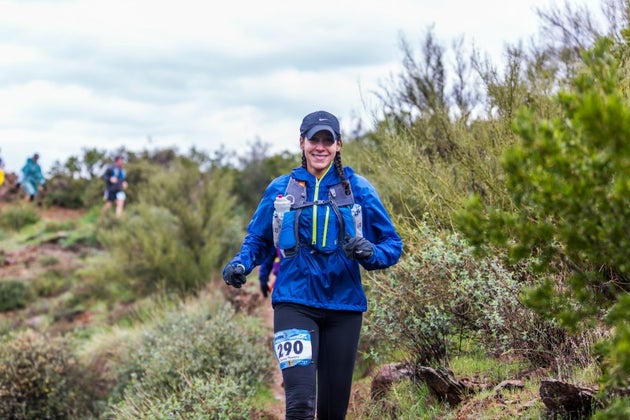 Heading into the age of 30, Jenna Powers—who is currently Amazon’s director of global associate experience—found her personal life in a place she wasn’t expecting it to be. In the midst of a divorce, she decided to cope by diving into both her career and running. While she started regularly racing everything from 5Ks to half marathons, it wasn’t until April 15, 2013, that watching the Boston Marathon bombing convinced her it was time to commit to a full marathon.

In 2014, she ran the Great Wall of China Marathon and felt that as a marathoner, she had finally found and reinvented herself. Not only did she continue to run marathons, but in 2016, she also completed her first 100-miler, the Umstead 100 Mile Endurance Run in Raleigh, N.C.

As Jenna’s confidence and running career took off, so did her professional career. “While I was successful in jobs before coming to Amazon, my trajectory at the company is aligned with my running success,” she affirms.

The first year that she ran a full marathon was the same year that she was promoted as one of Amazon’s youngest directors. Then again at the same time as training for her first 100-miler, “I took on a new role in the company that required me to lead a global team literally ten times the size of my prior team. This is not coincidence.”

Looking to continually challenge herself, Jenna wanted a new and even greater venture for 2017—the year when she turns 40 (on Aug. 23). Realizing what a different place she is in from 10 years ago when she started with 5Ks, she set the goal of running 40 races in 2017.

“When I shared the goal with my Run The Year group, several mentioned they knew people who’d done something similar, including performing 40 acts of volunteerism,” she shared. “That’s what gave me the idea to alter my goal of not just running 40 races myself, but supporting 40 other runners.”

So what does supporting other runners mean exactly? Jenna is paying the race fee for 40 other runners to run in a race of their choosing. She started her blog, 40bibs, so that she could both chronicle her own races, and so other runners could apply to have her pay their entry fees. She then features the other runners on her blog as well.

“I’m trying to ‘spread the support’ throughout the year while I work towards my goal of 40 races. To date, I’ve paid for 18 runners’ entries for races in 12 states and 3 countries.”

One of the runners she is supporting is a 16-year-old, non-verbal autistic boy who is running his first half marathon. Another is a collegiate runner who was winning in a local marathon when he got injured. Now in his forties, he is flying across the country to re-run the marathon he was injured in. Six of the people whom she is supporting have already completed their race and are featured on her blog, and she is still accepting applications from other runners who need monetary support for a race through her contact page.

So what are the 40 races that are on Jenna’s calendar for herself? Thus far in 2017, she has completed the Walt Disney World Dopey Challenge in Orlando, the Black Canyon 100K in Arizona, the Dubai Marathon and the Canalathon 50K in Manchester, UK. Interspersed throughout, she does schedule some shorter races like the Hot Chocolate 15K in Seattle.

“In addition to the 40 races, I am working toward marathoning in all 50 states and all seven continents. I travel internationally for Amazon, and that helps get me to some of my more exotic race locations.” 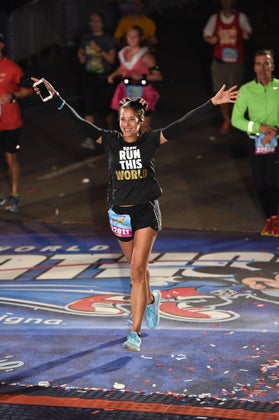 One of her most memorable experiences so far this year took place at the Dopey Challenge when race organizers cancelled the half marathon race due to severe lightning storms at the start time. After the storms passed, thousands of runners took to the streets of Orlando and covered the 13.1 miles in the rain on their own, and many spectators still came out with cow bells, signs and pom-poms to cheer on runners. Other spectators “purchased bottled water, granola bars, and fruit with their own money, setting up impromptu ‘aid stations’ along the route. It was unlike anything I’ve ever experienced.”

When I asked Jenna about the most important lessons she has learned from running, her response was all about mental strength, success and taking chances.

“Your body can do amazing things if your mind lets it. Mind over matter is real.” She recites several examples when mental strength has impacted her ability to finish a race.

During the Black Canyon 100K just this past February, she faced very cold and wet weather conditions with 46 miles done and another 16 miles to go. “For the first time ever in a race, I experienced what I can only describe as decision points. First, I decided that I wasn’t cold. I visualized myself sitting in a hot tub and in a sauna, and every time the cold feeling started to creep in or my teeth started to literally chatter, I only told myself more forcefully, YOU ARE NOT COLD.” She finished the race under the cut off time necessary to qualify for the Western States 100-miler lottery, and was immediately treated for hypothermia and hypoxia.

“I finished that race because I made the decision to finish it, and because I decided there wasn’t anything in my way. I think that is the life lesson. Many times we think we can’t do something; we think the barriers are too great or out of our control. We can control where our mind goes as a result. This is more than deciding how you will react to a situation. After Black Canyon, I truly believe that we can change not just our reaction but our perception.”

She also believes that fear of failure holds back many women in all aspects of their life so that they don’t even dare to try something new or difficult. “Failure is a natural step in finding success and other opportunities. I’ve had racing success and racing failures. I’m not afraid of failure; I just correct, improve, and try again next time. It’s the same with work. I think I’ve been successful at Amazon because I’m not afraid to fail. When it happens, I do the same thing as I do on the race course – correct, improve, and try again next time.”

One thing that Jenna emphasizes is that she is a “proud mid-packer.” She is an endurance and distance runner who is not sub-elite or placing in her age group. “This is important because it means that I am in the majority… Anyone, absolutely anyone, can cross a finish line of any distance. And it’s the finish lines, not the clock, that will change your life for the better.”

You can follow Jenna’s journey of crossing these 40 transformative finish lines on her blog. If you have a race that you want to run but need financial assistance, she is still accepting applications.