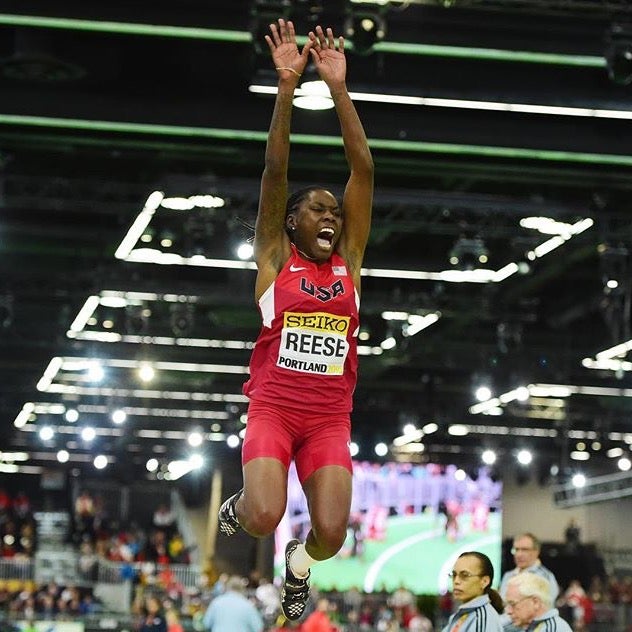 Olympic-gold-medal track-and-field star Brittney Reese knows a thing or two about training hard and performing at your best. In March, she won her sixth World gold in the long jump at the 2016 IAAF World Indoor Track & Field Championships. Reese is the first and only long-jump athlete—male or female—to win five World Championships in a row.

Reese lives and trains in San Diego at the Olympic Training Center and is currently preparing for the Olympic Trials, hoping to win another gold in Rio (and she is highly favored to do so). We caught up with Reese to find out more about what a typical workout looks like for her and what she wishes more people knew about the long jump.

Women’s Running: What is a typical workout like for you? What types of workouts do you have to do to prep your body for the long jump?

Brittney Reese:  As a jumper, we do a lot of plyo. Honestly we don’t do a lot of jumps as far as getting on the runway and jumping. The main thing we focus on is a lot of weight training as far as plyo—moves like box jumps and hurdle hops to get the legs to bend and get that extra bounce. It all depends on the day for us. We practice approaches, which is on the runway, to work on getting our mark. We also do sprints, but for very short distances.

WR: How do you use food to fuel your performance? Is there anything you prefer to eat before and after competing?

BR: It really depends where we are. If we are competing overseas, our events are later in the day because it is so hot, usually around 5 p.m. or 6 p.m. Because of that, we have all day to fuel, so you still want to get breakfast in and you want to get a decent lunch in. I don’t like to be super fueled before an event, so I eat a little pasta to get carbs, but nothing super heavy. I also drink plenty of water and Gatorade. If we are in the States—depending on the meet—we often compete earlier in the day. I am able to get a good breakfast and lunch in to get fueled up, but dinner is later after the meet.

WR: Is there anything you wish people knew about the long jump?

BR: The long jump isn’t just a run and jump. There is more to it than that. You have to figure out steps, find your mark to be on the board so you wont scratch, be in the right position and focus on your landing to make sure you don’t put your hand back and make sure you get necessary height. A lot goes into it that people don’t understand, such as biomechanics to find out max velocity of where to be and how fast you need to go in order to jump further.

WR: How do you stick to your goals—especially in between Olympic years?

Tori Bowie: The Fastest Woman In The World

The Team Behind Gwen Jorgensen