As we say goodbye to another year of greatness, we reflect on some of the more incredible, insane, funny and eyebrow-raising moments of our sport. Some are grand awe-inspiring performances on big stages, others are viral-tastic mishaps that caught the attention of everyone. Most are just reminders of how powerful running has become and continues to become. Here are some of our favorites, our readers’ favorites and Twitter’s most beloved times in 2015:

1. Emily Infeld scooting past Molly Huddle for the bronze. Anyone who is familiar with competitive running knows Huddle is a massive powerhouse of speed—she’s the American 5K record holder and won her first national title in the 10K on the track in 2015. So when Infeld leaned past Huddle just steps from the line to capture the bronze in the 10K at the 2015 world championships, people noticed. It raised the larger discussion of celebrating too early during races—something Huddle appeared to do, raising her hands in victory and quickly lowering them when she realized she did not score the bronze.

2. Alysia Montaño’s contention for four Olympic and/or world medals. Doping has been anything but small news in 2015, and 800-meter queen Montaño felt the after effects of being cheated out of podium moments when the World Anti-Doping Agency revealed that Russian middle-distance runners Mariya Savinova and Ekaterina Poistogova were both included in a report suggesting their lifetime bans from the sport. With the two cheaters removed, Montaño’s fifth-place finish at the 2012 Olympics becomes a third-place one. Others in the industry rallied behind Montaño’s emotional response, posting photos of flowers in their hair in support of an athlete who does the same every single race. We are proud to call her a Women’s Running cover runner!

3. Usain Bolt’s collision with a cameraman. When the world’s fastest man gets hit by a rogue reporter on a segway, the video goes viral. Thankfully the Jamaican athlete was not injured and shook hands with the man after receiving his gold medal, of course, at the world championships. 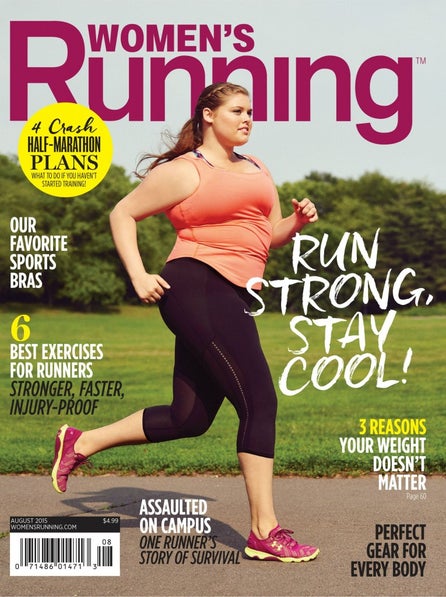 4. Erica Schenk’s inspirational August cover. 2015 was a big year for Women’s Running, with much credit owed to Erica Schenk, who courageously agreed to represent all runners on our August cover. We knew she was incredible, but we did not anticipate the overwhelming positive response we received from our readers, brands, other publications and social media across the world. Schenk is just one example of the shift within the industry to talk about the everyday person who’s moving, no matter their appearance, experience or background. The 18-year-old even appeared at the 2015 Teen Choice Awards! 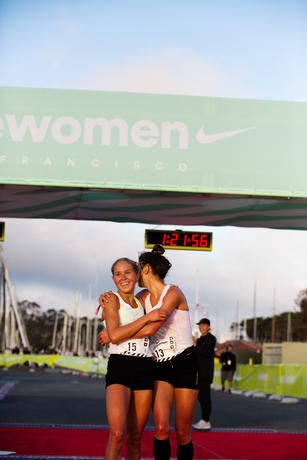 5. Nike’s cancellation of the prestigious Nike Women’s Half Marathon in San Francisco. While details remain vague on what the future holds for the popular race and series, Nike did confirm the cancellation of its flagship event after more than 10 years of hunky firemen dishing out necklaces. The news did not sit well for the thousands of women who were hoping to experience this grand race, but we are sure the brand has fresh tricks up its sweaty sleeves.

6. Ninety-two-year-old Harriette Thompson does it again. In 2014, the runner-grandma set an age-group record as the fastest 90+ runner to complete a marathon at Suja Rock ‘n’ Roll San Diego. In 2015, the two-time cancer survivor did it again, this time setting the record as the oldest women ever to complete a marathon. She became every runner’s grandparent when the news spread across the country—but the best part is she really doesn’t understand what the fuss is all about.

7. Kiran Gandhi goes period-commando for the London Marathon. Garnering both disgust and applause, the M.I.A. drummer let it flow freely during 26.2 miles in 2015, stating that she did it to raise awareness for those who do not have access to feminine products. Some remain skeptical and grossed out about the whole thing, but everyone definitely had an opinion. 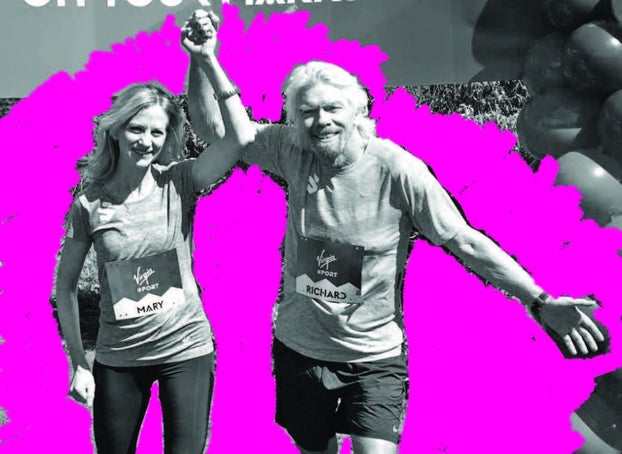 8. Mary Wittenberg stepping down from President and CEO post at New York Road Runners. A name synonymous with the iconic New York City Marathon, Wittenberg announced her move to launch Virgin Sport as Global CEO alongside Richard Branson. She was the first women to serve NYRR in that position, which she held for 10 years. 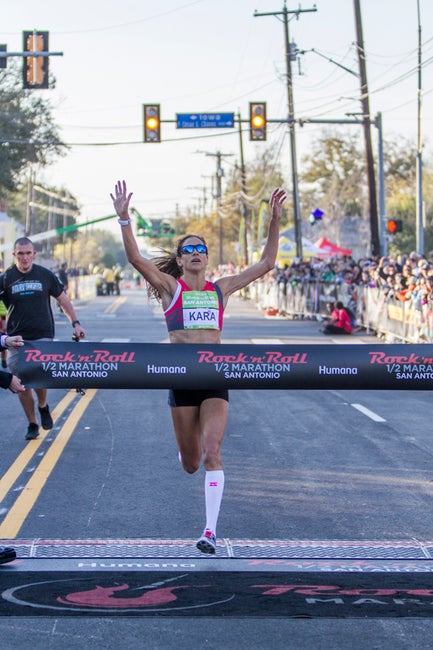 9. Kara Goucher, among others, bringing the doping conversation to the forefront of the sport. Like Montaño, Goucher has also been burned by sketchy behavior regarding illegal substances. The two-time Olympian opened up during the ProPublica/BBC interview about her time running under Nike coach Alberto Salazar before leaving to join Oiselle. She displayed major guts and class for speaking out about what’s often swept under the rug, and dozens of other elites have followed suit, both before and after her interview went public. The runner, who’s currently training for a spot on the 2016 Olympic marathon team, has since posted some incredible times after a slew of injuries, first winning the Big Sur Half in November 2015, then Rock ‘n’ Roll San Antonio Half Marathon in December.

10. Allyson Felix’s Olympic announcement. One of the most decorated American runners of all time, Felix will go for the insane 200-400 double at the 2016 Rio Olympics, pending a schedule change that USATF is currently negotiating. Currently there is only 75 minutes between the 200-meter preliminaries and the 400-meter finals, an extremely abbreviated time to be properly prepared to win the second event. She won the 200m Olympic gold in 2012 and ran a personal best to win the 400m in 2015 at the world championships. She will be the first woman in 20 years to achieve the double if it happens. 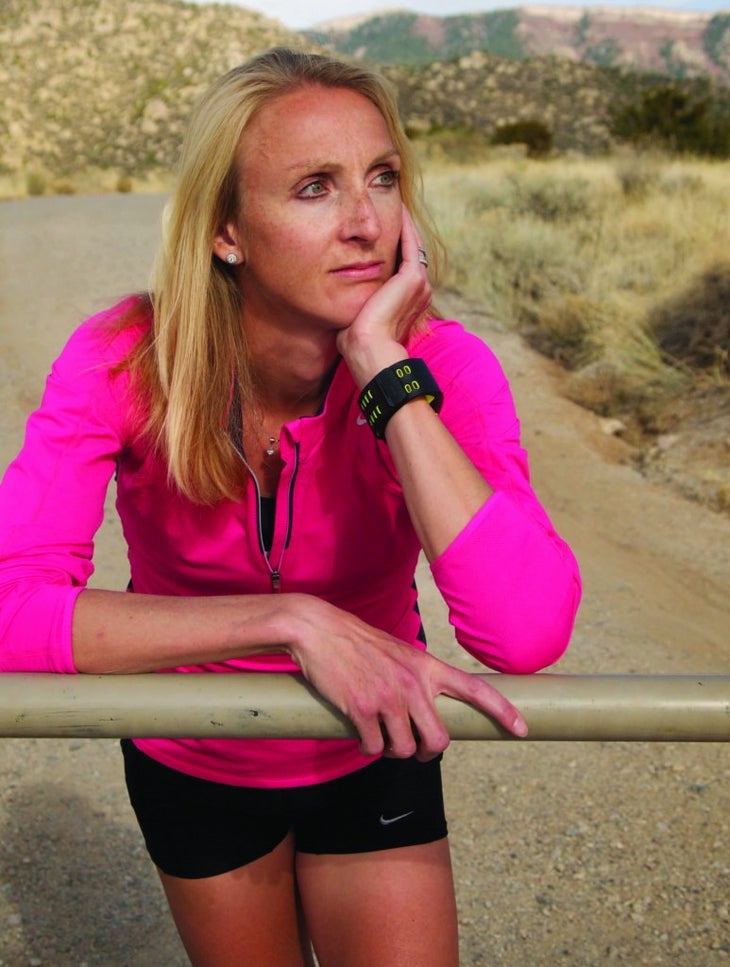 11. Paula Radcliffe’s retirement. The world’s fastest female marathoner hung up her racing flats this year. Radcliffe ushered in her retirement from competitive running by competing in the London Marathon one last time. An achilles injury prevented her from logging very much mileage prior to the race, but the 41-year-old was still able to clock a 2:36:55 while the crowds cheered her to the finish.