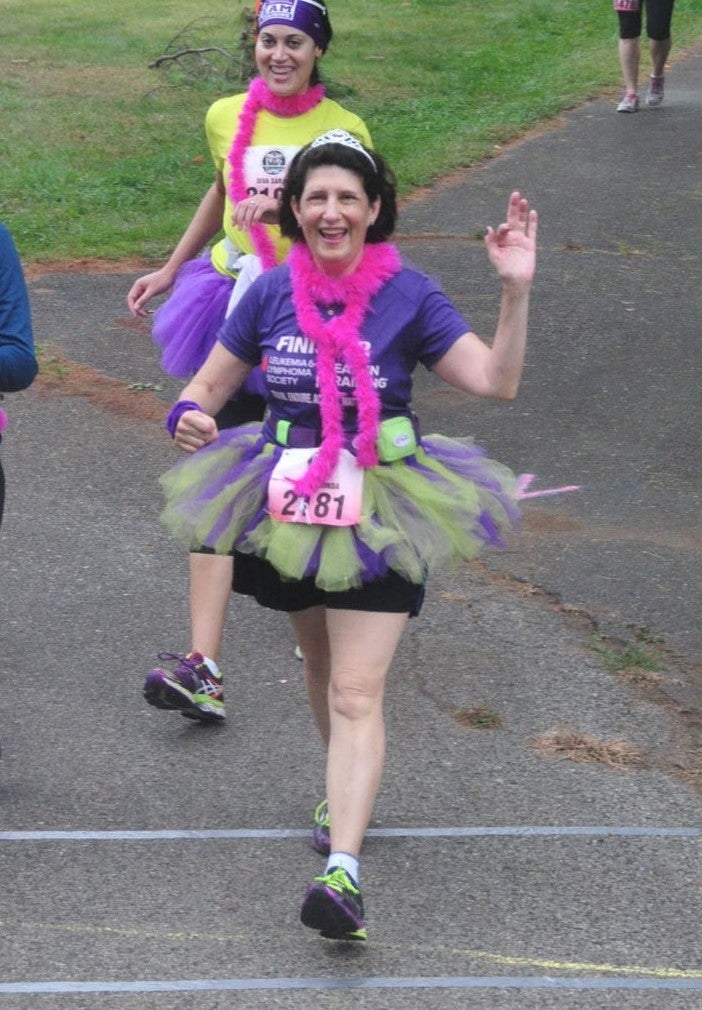 On November 10th, 2010 I was diagnosed with diffuse large B cell non-Hodgkins lymphoma. I actually consider myself lucky. I had absolutely no symptoms whatsoever. I went for a CAT scan of my chest, and the radiologist called me in to tell me my lungs were fine but I had a lump under my arm. I was treated at Sloan Kettering, receiving chemotherapy and radiation. My last treatment was on Valentine’s Day 2011, four days before my 57th birthday. As of this writing I have been in remission four years and 4+ months. I have “graduated” to being seen for my check-ups at the survivors’ clinic—yay!

A friend of mine suggested that training for a race with Team in Training (TNT) would be a great way to celebrate going into remission. Even though I had never run before in my life, I agreed and joined. Unfortunately, just a few short weeks later my mother was diagnosed with AML, a deadly form of leukemia. My mother died fourteen months later, August 16, 2012, at the age of 83.

I am grateful that TNT has given me what I feel is a meaningful way to celebrate my recovery and to honor my mother’s memory. AML is a particularly lethal form of leukemia. The five-year survival rate is only 25%; treatments for it have not changed in decades. LLS is at the forefront of organizations funding a research consortium focused on finding new cures for AML. Every time I run a race with TNT, I am contributing to that effort. I have participated in the 2014 TCS NYC Marathon, five half-marathons, and numerous shorter races.

I am particularly excited to participate in the inaugural Brooklyn Rock ‘n Roll Half Marathon this October. The first major race I ever ran was the 2011 Philadelphia Rock ‘n Roll Half, and to this day it is my favorite race that I have ever run.