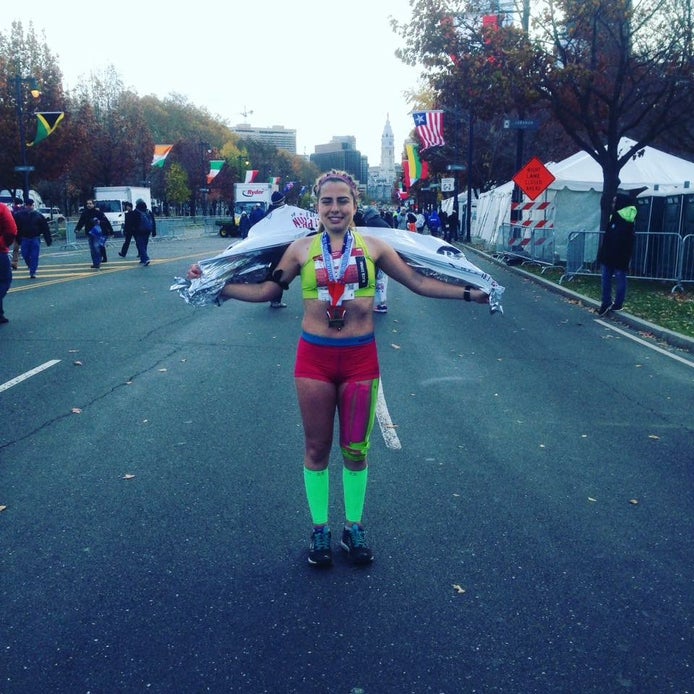 When someone cuts into your knee three times during two years, it’s emotionally, mentally and physically draining.

I’m a 20-year-old marathon runner and pre-physical therapy student at Monmouth University. This past weekend, I completed the 2016 Philadelphia Marathon, which was my third full marathon and first race back since having my third knee surgery in May. The last 2 years have been anything but easy for me. It all started in 2014, when I experienced a terrible freak accident that changed my life.

I tore my ACL and meniscus playing basketball in gym class during the senior year of high school. At the time, I was on a track and cross-country scholarship to the University of Florida. I was forced to stop running for 5 months, which reduced all of the speed I had worked so hard to gain throughout my career. Before having surgery, I was able to run a 5K in 18:37, and a mile in 4:59. If my luck couldn’t get any worse, I was diagnosed with a cyclops lesion during my first semester at Florida, just after I started running again. After having my second surgery that semester, I ended up medically withdrawing from school and taking a semester off before, transferring to Monmouth the following year.

I was drained and at a point I almost lost hope in everything. Thankfully, this is where marathon running came in. I needed to find a new direction in running, since I didn’t want to compete in college anymore. I had only run a handful of times in the past year, but it just didn’t matter anymore. I signed up to run the 2015 New York City Marathon with an amazing charity called Team for Kids. I raised a total of $2,620 for kids in community-based running programs and met some of the most genuine, selfless and inspiring teammates in the process. Running New York City with Team for Kids changed my life and inspired me to keep going.

In March of 2016, I ran the Rock ‘n’ Roll DC Marathon in a time of 3:26, which was a Boston Qualifying Time and 21 minutes faster than my time at New York City. However, I ran the race in an old pair of shoes, and because I ran so hard, I was diagnosed with a partial meniscus tear. This caused me to undergo my third knee surgery over the summer. I asked my surgeon if he thought I could race Philly, and he believed in me, as I did in myself. I was forced to take off six weeks from running, and didn’t start running until around July. In August, I also visited southeast Asia for three weeks, where I was unable to exercise at all (unless you count jungle trekking in Chiang Mai). Even after not running for a total of 9 weeks over the summer, and stopping for the bathroom four times, I surprised myself by finishing in a time of 3:36.

I don’t plan on stopping at marathons. This April, I’ll be racing in my first 50-mile ultramarathon at the North Face Endurance Challenge in DC. I’m hoping to become one of the youngest to finish it and inspire others with similar injuries in the process. Of course life gets hard, but I don’t believe in ever letting an injury make me fearful of taking a risk to accomplish something great.

To anyone reading this, regardless of what hardship you’re going through, just remember that you’re a lot stronger than you think, and I believe in you.