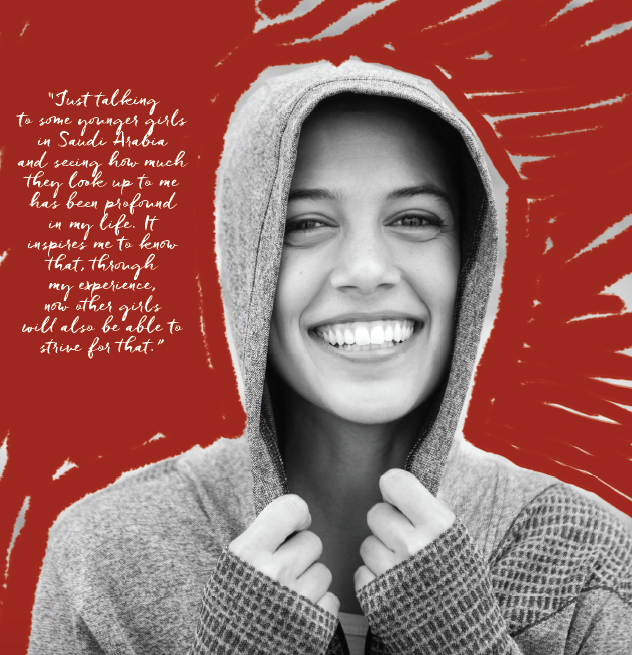 One of the lesser known, but nonetheless iconic, stories out of the 2012 Olympics is that of Attar. As a student at Pepperdine University, she had a unique opportunity to participate in the London Olympics in the 800 meters on behalf of Saudi Arabia. Attar, who holds dual Saudi Arabian and American citizenship, did not qualify in the traditional sense; she received an invite to be one of the first two female athletes ever to represent the Islamic country as an Olympian.

The ask came just a few months before the games started, and her decision to run was, and still is, controversial due to restrictions placed on females in the Muslim culture. (Some networks in Saudi Arabia chose not to air the 2012 Olympic Games.) However, to Attar, the choice to leave her mark on history was no-brainer, despite the disapproval of others who upheld Saudi Arabia’s former ban on female participation in sports.

“I never expected as an athlete I would go to the Olympics, let alone represent Saudi Arabia as one of the first females. I think it’s still something I’m processing and reacting to,” says Attar, who now trains in Mammoth Lakes., as a Oiselle-sponsored runner. “We always look for opportunities that we can do something that makes a difference. How could I not do it?”

Adhering to the Islamic dress codes for females, Attar donned a handcrafted uniform that covered everything from her hair down to her ankles, which some athletes mistook for her warm-ups before the race. She ran two laps against the greatest 800-meter runners in the world and crossed the line in dead last to a standing ovation.

“People were so supportive of what it meant and not just the time I was getting. It was incredible,” recalls Attar. Although her participation was met with scrutiny from some, Attar says she didn’t feel like a political pawn—she ran her own race.

It is unclear if she will be able to race again in Rio 2016. For now, Attar has plans to better her marathon times under the guidance of her coach, Andrew Kastor, who sees great potential in the young runner. She’s qualified for and completed the Boston Marathon three times (and the Boston 2 Big Sur Challenge the same amount of times)—and her finisher photo graces many of those famous race banners spotted around Copley Square!

Read More:
Here Are Some Pretty Humbling Words From Cover Runner Sarah Attar
Behind The Scenes Of Our October Issue