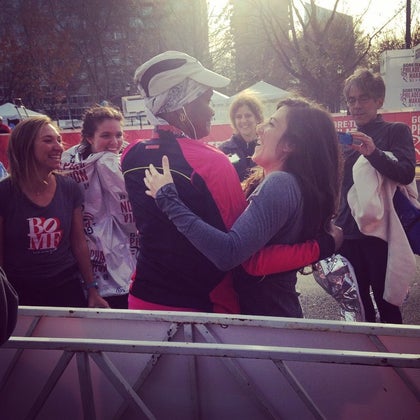 “She did it! Oh my God, she did it!” Those were the words that brought Donna B. to tears, as she became the first female residential member from Back on My Feet Philadelphia, an organization that combats homelessness through the power of running, community support, and by offering essential employment and housing resources, to complete a marathon. After a long 6 hours and 45 minutes of running, Donna didn’t expect anyone to still be at the finish line. To her surprise, standing there were Back on My Feet members cheering her on. “That’s the great thing, they wait for you. There’s always someone that’s going to be there for you.”

Donna first joined Back on My Feet through a women’s shelter in West Philadelphia. At the time she had a lot of anger, she couldn’t find a job, and she didn’t have enough money to buy a new pair of shoes. When Donna heard that joining the runs would get her a new pair of shoes, she was immediately on board. To Donna, a new pair of sneakers was the key to getting a job. So she signed up for the program with the intention of participating for only a couple of weeks, long enough to earn her shoes.

For Donna’s first morning run with Back on My Feet, she had her mind set on walking. From the beginning, volunteers and other members encouraged her to run. After a few failed attempts, a volunteer finally convinced Donna to try alternating between walking and running the city blocks.

A few weeks turned into months and before Donna knew it, she was running 7, 8…13 miles at a time! The people motivating her to keep running were the people who became her family. According to Donna, “you can’t get a better group of people “

After achieving her goal of gaining employment, Donna became an Alumni member of the group. However her days with Back on my Feet are far from over. When she overheard a staff member say they’ve never had a woman residential member run a marathon, Donna volunteered without any hesitation. “That was the longest ride of my life,” she said referring to the 2015 Gortex Philadelphia Marathon. At mile 22 Donna was ready to give up, but her Back on My Feet family was there to support her. They pushed her for the last 4.2 miles and without even realizing she was crossing the finish line.

With one marathon under her belt, Donna is eager to run another. She plans to focus more on her training and she quit smoking to build up her speed. “I’m going to qualify for Boston this time.”

As she works towards qualifying for Boston, Donna is now preparing for her next race, the Stroehmann Bakeries Back on My Feet 5-Miler, which takes place on March 26, 2016. It’s the perfect training race before Donna tackles the Blue Cross Broad Street Run on May 1.